The Shameful Blackout of Thomas, Sowell and Williams 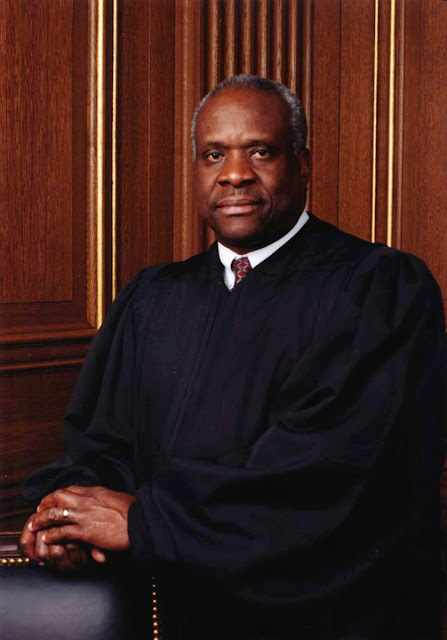 Clarence Thomas, one of nine members of the Supreme Court and the second black to ever join the Court, is not in the National Museum of African American History and Culture in Washington, D.C. Asked to explain Thomas' absence, the chief spokeswoman for the Smithsonian said, "The museum's exhibitions are based on themes, not individuals."


Yet the museum plans to add a popular local D.C. television news broadcaster. The museum's founding director, Lonnie Bunch, said the broadcaster "symbolized that it was really important that America was changing and his presence was a symbol of that change." And Thomas, raised in poverty to become only the second black to sit on the Supreme Court, is not "a symbol of that change"?
Left-wing blacks -- and that's the overwhelming majority -- feel that black conservatives like Thomas do not just have different or wrongheaded or illogical views. Thomas' views, to them, damage the black community. Never mind that most Clarence Thomas-haters could not identify a single case Thomas decided with which they disagree.


One line of attack against Thomas goes as follows. Thomas "took advantage" of race-based preferences to get into college and law school, but then "turned his back on those behind" by arguing that such preferences violate the 14th Amendment.
What these critics assert is that but for race-based preferences, Clarence Thomas would likely be working the deep-fryer at McDonald's. Assume, for the moment, that but for race-based preferences, Thomas would not have gotten into the particular schools he attended, College of the Holy Cross in Worcester, Massachusetts, and Yale Law School.
But in America thousands of colleges and universities, from community colleges to Harvard, accept students of varying abilities with financial assistance readily available. Surely the driven, hardworking, academically oriented Clarence Thomas could have and would have found admission into schools matching his skills and ability.
Here's another problem with race-based preferences. Studies document a disproportionately high college-dropout rate for minority students admitted with lower test scores and grades than their peers selected without preferences. How is this mismatching of value to the "beneficiary" if it leads to a higher dropout rate, with the frustrated student giving up and leaving school in debt? The student often blames his failure to succeed at this high level on unfair, if not racist, professors.
The African-American Museum's discrimination against Thomas provides just one example of the black anti-conservative bigotry.
Here's another. Every year, the black monthly magazine Ebony lists its "Power 100," defined as those "who lead, inspire and demonstrate through their individual talents, the very best in Black America." Each year Thomas is conspicuously absent. Apparently, as a sitting black justice on the Supreme Court of the United States, Thomas does not "lead, inspire and demonstrate ... the very best in Black America."
Ebony not only excludes Clarence Thomas but also shuts out prominent conservatives Thomas Sowell and Walter Williams.
As for Sowell, he's only an economist and writer whom playwright David Mamet once called "our greatest contemporary philosopher." Sowell, who never knew his father, was raised by a great-aunt and her two grown daughters. They lived in Harlem, where he was the first in his family to make it past the sixth grade. He left home at 17, served as a Marine in the Korean War, graduated magna cum laude from Harvard, earned a master's degree at Columbia University the next year, followed by a Ph.D. in economics at the University of Chicago.
Sowell, at 87, authored some four dozen books (not counting revised editions) and wrote hundreds of scholarly articles and essays in periodicals and thousands of newspaper columns. In 2015, Forbes magazine said: "It's a scandal that economist Thomas Sowell has not been awarded the Nobel Prize. No one alive has turned out so many insightful, richly researched books." Yet, thanks in part to the Ebony shutout, many blacks have never heard of him.
How does Ebony justify excluding economist and writer Walter Williams, former chairman of the economics department of George Mason University, where he still teaches? Raised by a single mother, he lived in Philadelphia's Richard Allen housing projects. He served as a private in the Army before earning a bachelor's degree at a state university, followed by a master's and a Ph.D. in economics at UCLA. Williams has written a dozen books on economics and race, including the inspirational "Up From the Projects: An Autobiography," and was recently the subject of a documentary about his life.
The exclusion of people like Clarence Thomas, Thomas Sowell and Walter Williams explains why there's no serious discussion in the black community about government dependency; school choice; the damage done by high taxes, excessive regulation and laws like minimum wage; and why blacks should rethink their allegiance to the Democratic Party.
The failure to acknowledge conservative blacks is a failure to engage their ideas, to the detriment of the community. This is not merely an injustice to them: It is an injustice to all Americans.
https://townhall.com/columnists/larryelder/2017/08/10/the-shameful-blackout-of-thomas-sowell-and-williams-n2366642
_____________

Clarence Thomas: Disappeared by the Smithsonian


The curious case of The Smithsonian v. Clarence Thomas


What is the Smithsonian Institution?

It is a depository of national treasures and a national treasure in and of itself. It is the world’s largest system of museums — 19 museums, nine research centers, 138 million items in the archive, etc. — and it is a trust established by Congress, the original bequest from the British scientist James Smithson having been squandered through — one suspects this history will repeat itself — a bum investment in Arkansas bonds, which the state defaulted on.

It is also corrupt.

The Smithsonian has opened a new National Museum of African American History and Culture, a long overdue addition to its offerings. And in this version of African-American history and culture, black conservatives do not exist.

Specifically, the life and career of Supreme Court justice Clarence Thomas have been — forgive the term — whitewashed from the record. Anita Hill, an obscure functionary who achieved for herself a moment of fleeting fame when she advanced the interests of the Democratic party by smearing Clarence Thomas with lurid, flimsily documented allegations of sexual harassment, is presented as a major figure of the 20th century.

The scholar and jurist who actually sits on the Supreme Court? Clarence Thomas is an invisible man, so far as the Smithsonian is concerned.

There are two possible explanations for this. The first is the Hanlon’s-razor (never attribute to malice what may be adequately accounted for by stupidity) explanation: The dons of American history simply goofed and overlooked Justice Thomas, as though the new museum were a picnic and each of its curators thought the other guy was bringing the potato salad.

Because we tend to have warm feelings toward the Smithsonian, we may extend maximum charity in our analysis here. But even at the limit of that charity, we could conclude at best that the Smithsonian is managed by incompetents, that its management should be decimated or more than decimated, and that Congress should use its purse-string powers to effect this.

The second and more likely explanation is that the Smithsonian is corrupt.

That is true of everything from the public schools to labor unions to Catholic seminaries.

If you are a high-school sophomore in Lubbock, Texas, that might mean receiving an account of American history which consists almost exclusively of the Great Depression, Jim Crow, and the Triangle Shirtwaist Fire, as I did

If you are a family of modest means that has saved its pennies for a once-in-a-lifetime trip to our nation’s capital with the intent of exposing your children, however briefly, to the best that has been thought and written in the American context, that means a museum of African-American history in which a major figure in African-American history has been airbrushed away like a Soviet apparatchik fallen into disfavor.

If you were looking for a figure who personified the humiliations and triumphs of black Americans, you could hardly do better than Clarence Thomas, the son of a poor, Gullah-speaking family on the Georgia coast, a man who was not quite fluent in anything that would pass muster as English until his adulthood — who, nonetheless, found his way into college, into the Yale law school, and the Reagan administration, whose shortcomings and errors he admonished fearlessly.

When he was elevated to the Supreme Court, the Democrats — who hate a black conservative more than they hate anything on this good green Earth — concocted every manner of dishonest attack to try to do to him what they had successfully done to Robert Bork not long before.

But Clarence Thomas prevailed over what is by now a familiar attempt by the Democrats, the party of Bull Connor, to keep a black man in what they imagine to be his place.

His place is in the Supreme Court. In a sane world, it is also in the National Museum of African American History and Culture.

If the Smithsonian intends to conduct itself like a political organization — one in which “black” is an ideological descriptor rather than a racial one — then Congress should treat it like one and redirect its funding toward some more worthy and more intellectually defensible cause.

Its director, David J. Skorton, might find a useful and profitable role on the Hillary Clinton presidential campaign — but, if this is the best he can do, he does not belong on the payroll of an institution nominally dedicating to the pursuit and preservation of knowledge.

We are owed an explanation. And if the Smithsonian cannot provide a convincing one, then it no longer deserves public support. It cannot function as a trust if it is untrustworthy.