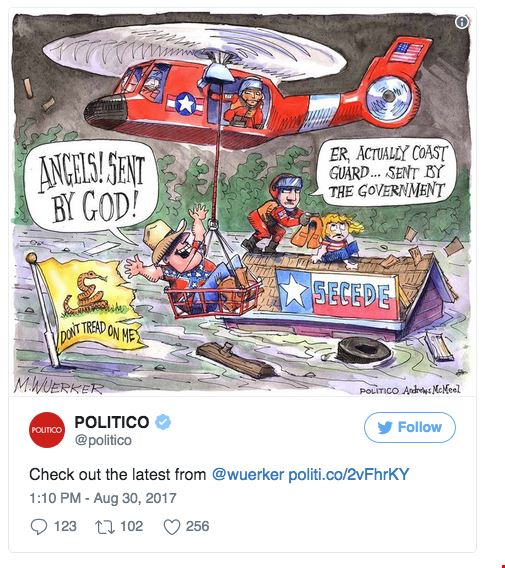 ﻿
POLITICO is being criticized for publishing a tone-deaf cartoon mocking the religious faith and political views of Houston residents in the aftermath of the flooding.
The cartoon, drawn by artist Matt Wuerker, depicts a family sitting on the top of a house amid rising floodwaters on the verge of being rescued by a helicopter. One of the people calls the helicopter an "angel, sent by God," to which the rescuer then sneers that he's in the Coast Guard and sent by the government.
---
I mean, this is beyond tasteless, and it's almost sickening how nobody thought to themselves "hey, maybe this is a bad idea!" during the drawing, publishing, and tweeting process. Now is not the time. Hurricane Harvey and the subsequent flooding didn't discriminate based off of religion, political views, or skin color. Further, a person's political views, religion, or skin color don't make someone any more or less worthy of being rescued from a flood, by either a private boat driven by the Cajun Navy or by the U.S. Coast Guard. This isn't too challenging of a concept.
-----


Click here to read the rest of this disturbing article.
Posted by Frances Rice at 4:51 PM