2018 is an election year: Those who don't vote elect the wrong candidates

By William Haupt III | Watchdog.orgTop of Form
Bottom of Form 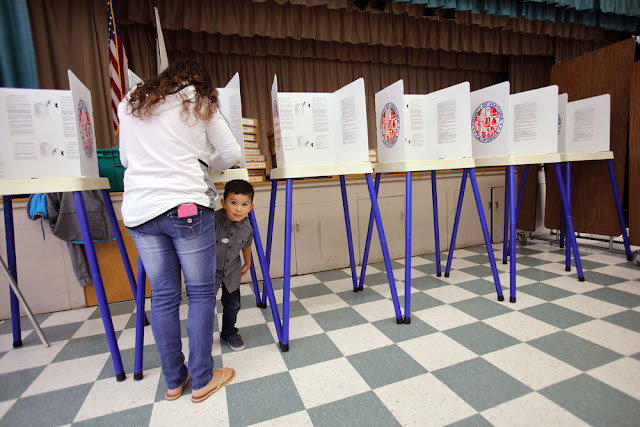 Top of Form
Bottom of Form
“Bad officials are the ones elected by good citizens who do not vote.”
– George Jean Nathan

At times, a group of people with differing opinions must come together to make a decision between several options.

This happens in business, social organizations and politics.

In business, those left out of the process fight back.

In social organizations, those not allowed a voice in selecting officers, planning events or spending demonstrate their displeasure by quitting or changing the bylaws.

In America, everyone registered to vote has an equal voice in the republican process.

Yet only on rare occasions do half of them show up. Those who stay home show no concern after the damage done by electing the wrong person.

After the two elections of Barack Obama, every American is aware all political races in our nation depend on whose supporters vote.

A Census Bureau report shows a higher percentage of African Americans than whites voted in the Obama elections for only the second time in our history.

The driving force in 1968 was an anomaly to political or ethnic polarity since it was the first election after the passage of the Voting Rights Act of 1965.

Over 70 percent of blacks voted in the Obama contests, and the Hispanic vote increased by 9.4 percent. Only 64 percent of white voters made the effort.

“You can fool some of the people some of the time and that's enough to make a decent living.”
– WC Fields

Democracies around the world hold elections to reboot their nations. Some register everyone and it is mandatory to vote. Others shame those who don’t.

But turnout in American elections is fraught with a pattern of shrinking participation. We are lucky to get half of our voters to the polls during a presidential race and 10 percent for local elections!

There’s no democracy where every seat in a legislative house is up for grabs every two years where so few votes are cast. This is routine in every midterm election.

“Every election in America has been determined by those who don’t vote.”
– Carl Williams

According to recent data from the U.S. Census, our voter turnout is the lowest in the free world.

There are more than 240 million voting-aged Americans, yet nearly 130 million consistently don’t vote.

And why do Americans take the sacramental duty to vote so lightly?

They have more excuses than the guy who got busted for shoplifting at Walmart.

Those who seldom vote claim: “My vote doesn’t count, why vote.”

This is a typical excuse for not voting in the presidential election.

“Stupid is as stupid does.”
– Forrest Gump

The price we pay for freedom is responsibility.

It's a debt we’ll never pay off.

Not voting sends a clear message of disrespect for the lives of many people who died fighting for these rights.

It’s uncanny to think of where America would be if our founders, activists, and soldiers felt the same way as so many pacifist voters do today.

No one gave them a mandate to do what they did for America in the face of far more difficult times than many of us have ever encountered.

Not voting can lead to the destruction of an entire nation if the wrong candidate wins.

CLICK HERE TO READ THE ENTIRE ARTICLE.
Posted by Frances Rice at 3:57 PM