Analysis: The quiet probe into Clinton email investigation could be a landmine for Robert Mueller 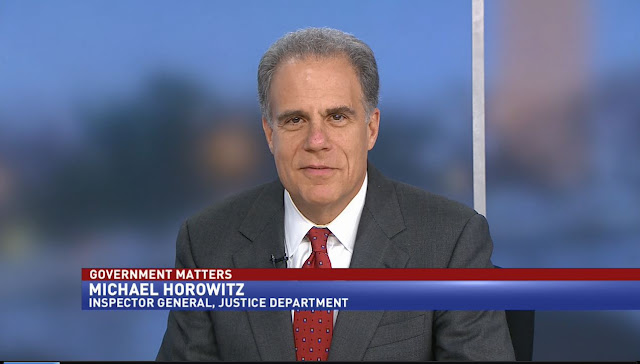 Inspector General Michael Horowitz has offered few public indications of the status of his probe, which some lawmakers said he initially told them was expected to be complete by early next year.

In early January, news that the Justice Department’s inspector general launched an investigation into the government's disputed handling of the Hillary Clinton email inquiry was quickly overtaken by the chaotic run-up to President Trump’s inauguration.

For months, Horowitz’s investigation — which has amassed interviews with former Attorney General Loretta Lynch, former FBI Director James Comey and other key officials — had been grinding on in near anonymity. That is, until earlier this month when the inspector general acknowledged that Mueller was alerted to a cache of text messages exchanged between two FBI officials on his staff that disparaged Trump.

The communications, involving senior counter-intelligence agent Peter Strzok and bureau lawyer Lisa Page, were gathered in the course of Horowitz’s internal review of the Clinton case, which Strzok also helped oversee. Horowitz’s investigation is not examining Mueller’s operation. But the disclosures already have provided a hammer to Trump loyalists who are escalating their criticisms of the legitimacy of the special counsel’s inquiry.

Earlier this month, FBI Director Christopher Wray and Deputy Attorney General Rod Rosenstein only highlighted the potential gravity of the inspector general's work when they repeatedly urged Republican House committee members during separate hearings to withhold judgment about allegations of bias within the FBI until the internal Justice probe is completed.

Justice officials have indicated that a report is likely in the next few months.
"The inspector general's investigation is very important," House Judiciary Committee Chairman Bob Goodlatte, R-Va., told Rosenstein at a Dec. 13 hearing. The deputy attorney general cited the probe multiple times as the reason for declining to respond to lawmakers' questions about how the texts might affect Mueller's probe.

"It is very encouraging to us that (Horowitz) is doing what I think is good, unbiased work," the chairman said.

CLICK HERE TO SEE THE REST OF THIS ARTICLE.

Rep. Gaetz: Email Evidence From McCabe Indicates that Hillary Clinton Was Going to Get an 'HQ Special' 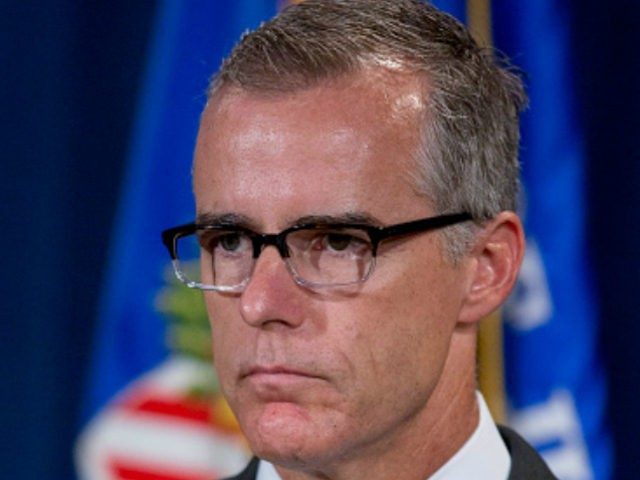 A Republican congressman on the House Judiciary Committee says Hillary Clinton received special treatment during the email investigation in 2016 while she was running for president.

"We have email evidence from Andrew McCabe indicating that Hillary Clinton was going to get an 'HQ Special,' a headquarters special," Rep. Matt Gaetz (R-FL) alleged on Fox News' "America's Newsroom" Friday.

FBI Deputy Director Andrew McCabe met with both the House Oversight and Judiciary Committees in closed-door hearings on Thursday.

"The Judiciary Committee is engaged in an investigation, particularly as it relates to the handling of the Hillary Clinton email scandal and any potential investigations of the Clinton Foundation and the handling of bribes or other types of improper payments," Gaetz said.

He explained that the "headquarter special" was an indication that "the normal processes at the Washington field office weren't followed and he had a very small group of people that had a pro-Hillary Clinton bias who had a direct role in changing the outcome of that investigation from one that likely should have been criminal to one where she was able to walk."

Gaetz added, "We've gotta ensure that that never happens again,  that the same processes that would apply to any American would also apply to people who were running for president of the United States."

Deputy FBI Director Andrew McCabe plans to retire from the bureau early next year, according to a new report.

McCabe is retiring amid heavy scrutiny from congressional Republicans over his roles in the Russia investigation and the Clinton email probe. Top Republican lawmakers like Iowa Sen. Chuck Grassley have recently called for McCabe’s ouster.

According to The Washington Post, McCabe will leave his post in a few months, after he becomes eligible for full pension benefits.

McCabe, 49, met for hours earlier this week with members of three Congressional committees to discuss his work on the Trump and Clinton investigations.

He was interviewed on Tuesday by the House Intelligence Committee, which focused on his involvement in handling the infamous Trump dossier. Fox News reported that McCabe offered few details about the dossier or the Russia investigation, which was opened at the end of July 2016.

Fox News reported that McCabe was unable to say what parts of the salacious dossier have been verified by the FBI.

On Thursday, McCabe met jointly with members of the House Judiciary and House Oversight and Government Reform Committees. The Russia investigation was off limits during that interview. Instead, McCabe was pressed on his role in the Clinton email investigation.

McCabe recused himself from that probe shortly before the presidential campaign after it was reported that his wife received hundreds of thousands of dollars in campaign contributions from Virginia Gov. Terry McAuliffe, a staunch ally of the Clintons.

One Republican lawmaker who took part in Thursday’s interview told The Daily Caller that Republicans were dissatisfied with McCabe’s answers regarding the Clinton investigation. The lawmaker declined to offer details about what part of McCabe’s testimony was inadequate.

McCabe has faced the heaviest criticism of late over a text message sent last year by Peter Strzok, the former FBI counterintelligence officer who supervised the collusion investigation.

It was revealed earlier this month that Strzok sent a text message on Aug. 15, 2016 which referenced a meeting that was seemingly held in McCabe’s FBI office.

“I want to believe the path you threw out for consideration in Andy’s office — that there’s no way [Trump] gets elected — but I’m afraid we can’t take that risk,” Strzok wrote to Lisa Page, an FBI lawyer who worked closely with McCabe.

Republicans have expressed concern over what “insurance policy” FBI officials had in mind.

Strzok was removed from Special Counsel Robert Mueller’s Russia investigation in July, when the text messages were discovered. 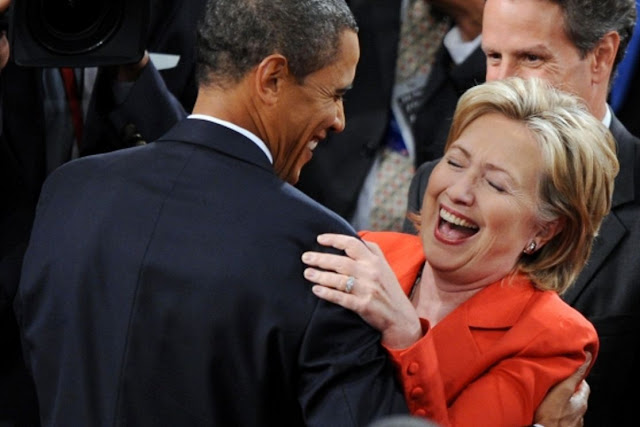 The FBI’s deputy director Andrew McCabe testified at a marathon seven-hour closed-door hearing of the House Intelligence Committee. According to the now-infamous text message sent by FBI agent Peter Strzok to his paramour, FBI lawyer Lisa Page, it was in McCabe’s office that top FBI counterintelligence officials discussed what they saw as the frightening possibility of a Trump presidency.

That was during the stretch run of the 2016 campaign, no more than a couple of weeks after they started receiving the Steele dossier — the Clinton campaign’s opposition-research reports, written by former British spy Christopher Steele, about Trump’s purportedly conspiratorial relationship with Vladimir Putin’s regime in Russia.

Was it the Steele dossier that so frightened the FBI?

There is a great deal of information to follow. But let’s cut to the chase: The Obama-era FBI and Justice Department had great faith in Steele because he had previously collaborated with the bureau on a big case. Plus, Steele was working on the Trump-Russia project with the wife of a top Obama Justice Department official, who was personally briefed by Steele.

The upper ranks of the FBI and DOJ strongly preferred Trump’s opponent, Hillary Clinton, to the point of overlooking significant evidence of her felony misconduct, even as they turned up the heat on Trump.

In sum, the FBI and DOJ were predisposed to believe the allegations in Steele’s dossier. Because of their confidence in Steele, because they were predisposed to believe his scandalous claims about Donald Trump, they made grossly inadequate efforts to verify his claims. Contrary to what I hoped would be the case, I’ve come to believe Steele’s claims were used to obtain FISA surveillance authority for an investigation of Trump.

There were layers of insulation between the Clinton campaign and Steele — the campaign and the Democratic party retained a law firm, which contracted with Fusion GPS, which in turn hired the former spy.

At some point, though, perhaps early on, the FBI and DOJ learned that the dossier was actually a partisan opposition-research product. By then, they were dug in. No one, after all, would be any the wiser: Hillary would coast to victory, so Democrats would continue running the government; FISA materials are highly classified, so they’d be kept under wraps. Just as it had been with the Obama-era’s Fast and Furious and IRS scandals, any malfeasance would remain hidden.

Strzok’s text about the meeting in McCabe’s office is dated August 16, 2016. As we’ll see, the date is important. According to Agent Strzok, with Election Day less than three months away, Page, the bureau lawyer, weighed in on Trump’s bid: “There’s no way he gets elected.” Strzok, however, believed that even if a Trump victory was the longest of long shots, the FBI “can’t take that risk.” He insisted that the bureau had no choice but to proceed with a plan to undermine Trump’s candidacy: “It’s like an insurance policy in the unlikely event you die before you’re 40.”

The Wall Street Journal reported Monday that, “according to people familiar with his account,” Strzok meant that it was imperative that the FBI “aggressively investigate allegations of collusion between Donald Trump’s campaign and Russia.”

In laughable strawman fashion, the “people familiar with his account” assure the Journal that Strzok “didn’t intend to suggest a secret plan to harm the candidate.” Of course, no sensible person suspects that the FBI was plotting Trump’s assassination; the suspicion is that, motivated by partisanship and spurred by shoddy information that it failed to verify, the FBI exploited its counterintelligence powers in hopes of derailing Trump’s presidential run.

But what were these “allegations of collusion between Donald Trump’s campaign and Russia” that the FBI decided to “aggressively investigate”? The Journal doesn’t say. Were they the allegations in the Steele dossier?

It is a question that was pressed by Chairman Devin Nunes (R., Calif.) and Republican members of the House Intelligence Committee at Tuesday’s sealed hearing. As I explained in the column, the question is critical for three reasons:

(1) The Steele dossier was a Clinton campaign product. If it was used by the FBI and the Obama Justice Department to obtain a FISA warrant, that would mean law-enforcement agencies controlled by a Democratic president fed the FISA court political campaign material produced by the Democratic candidate whom the president had endorsed to succeed him. Partisan claims of egregious scheming with an adversarial foreign power would have been presented to the court with the FBI’s imprimatur, as if they were drawn from refined U.S. intelligence reporting. The objective would have been to spy on the opposition Republican campaign.

(2) In June of this year, former FBI director James Comey testified that the dossier was “salacious and unverified.” While still director, Comey had described the dossier the same way when he briefed President-elect Trump on it in January 2017. If the dossier was still unverified as late as mid 2017, its allegations could not possibly have been verified months earlier, in the late summer or early autumn of 2016, when it appears that the FBI and DOJ used them in an application to the FISA court.

(3) The dossier appears to contain misinformation. Knowing he was a spy-for-hire trusted by Americans, Steele’s Russian-regime sources had reason to believe that misinformation could be passed into the stream of U.S. intelligence and that it would be acted on — and leaked — as if it were true, to America’s detriment. This would sow discord in our political system. If the FBI and DOJ relied on the dossier, it likely means they were played by the Putin regime.

CLICK HERE TO SEE THE REST OF THIS ARTICLE.
Posted by Frances Rice at 11:15 AM