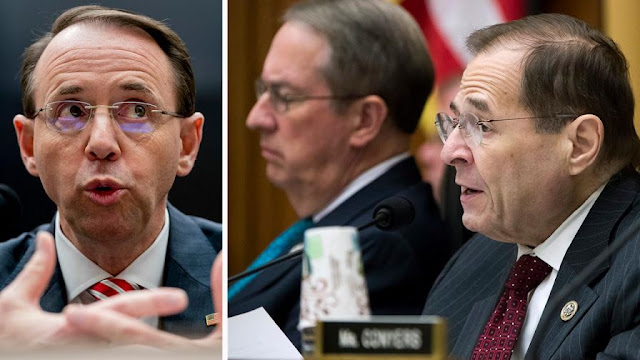 Rosenstein, who appointed Mueller and has overseen the Russia probe since Attorney General Jeff Sessions recused himself, testified before the House Judiciary Committee -- and faced a grilling from GOP lawmakers.


They zeroed in on anti-Trump text messages exchanged between two FBI agents who once worked on the Mueller team.
“This is unbelievable,” said Rep. Jim Jordan, R-Ohio, voicing concern that the "public trust" in the probe is gone.
Republicans for weeks have raised concerns that some investigators may be biased, citing everything from their political donations to past work representing top Democratic figures and allied groups including the Clinton Foundation.


But when committee Ranking Member Rep. Jerry Nadler, D-N.Y., pressed Rosenstein over whether he had seen “good cause” to remove Mueller from his post, Rosenstein pushed back.
“No,” Rosenstein said.
Nadler asked whether Rosenstein would fire Mueller if he were ordered to do so.
“I would follow regulation. If there were good cause, I would act. If there was no good cause, I would not,” Rosenstein replied, doubling down that he has seen “no good cause” to do so.
He suggested the probe -- of Russian interference in the 2016 election and possible collusion with Trump associates -- is being conducted appropriately at this stage.
But just hours prior to Rosenstein’s testimony, the Justice Department released hundreds of texts messages between two FBI officials—Peter Strzok and Lisa Page—who worked on Mueller’s team and were romantically involved. Many were anti-Trump and pro-Clinton.
In one exchange from August 2016, Page forwarded a Donald Trump-related article to Strzok, writing: “And maybe you’re meant to stay where you are because you’re meant to protect the country from that menace.”


TEXTS SHOW FBI AGENTS FUMING OVER TRUMP: 'PROTECT THE COUNTRY FROM THAT MENACE'


He responded: “Thanks. It’s absolutely true that we’re both very fortunate. And of course I’ll try and approach it that way. I just know it will be tough at times. I can protect our country at many levels, not sure if that helps.’”
In March 2016, Page texted Strzok, "God, Trump is a loathsome human."
"Yet he many[sic] win," Strzok responded. "Good for Hillary."
Later the same day, Strzok texted Page, "Omg [Trump's] an idiot."
"He's awful," Page answered.
The messages were given to the House Judiciary Committee. The officials no longer work on the Mueller probe.
Rep. Jordan said of Strzok, "This guy thought he was super agent James Bond at the FBI."
“We are now beginning to understand the magnitude of this insider bias on Mueller’s team,” Committee Chairman Bob Goodlatte, R-Va., said in his opening statement on Wednesday. He cited the “extreme bias” shown in the text messages between Strzok and Page; Mueller investigator Andrew Weissmann’s “awe” of former acting Attorney General Sally Yates for defying President Trump; and Mueller investigator Jeannie Rhee’s representation of the Clinton Foundation. He also cited the case of another DOJ official demoted amid scrutiny of his contacts with the firm behind the anti-Trump dossier.
“Aren’t DOJ attorneys advised to avoid even the ‘appearance of impropriety’?” Goodlatte asked, calling the “potential bias” of certain career Justice Department officials and lawyers on Mueller’s team “deeply troubling.” “DOJ investigations must not be tainted by individuals imposing their own political prejudices.”
Rosenstein told lawmakers that he has “discussed this with Robert Mueller.”
“It’s our responsibility to make sure those opinions do not influence their actions,” Rosenstein said. “I believe Director Mueller understands that, and recognizes people have political views but that they don’t let it [affect their work.]”
Rep. Steve Chabot, R-Ohio, pushed back, calling the appearance “sad.”
“Rather than wearing stripes like a referee, the Mueller team overwhelmingly ought to be attired with Democratic donkeys or Hillary t-shirts, not shirts that say ‘Make America Great Again,’ because I think the American people deserve more than the very biased team they have under Mueller,” Chabot said. “It’s really sad.”
But Rosenstein defended Mueller’s investigation, stressing he has “oversight authority” over Mueller.
“I know what he’s doing,” Rosenstein said of Mueller’s investigative actions. “He consults with me about their investigation, within and without the scope.”


When pressed over whether Mueller has attempted to “expand” the original scope of his investigation, Rosenstein said that he had given his “permission” to Mueller to investigate what he requests if necessary, noting that the special counsel team “does have authority” to investigate “obstruction.”
“If I thought he was doing something inappropriate, I would take action,” Rosenstein said.
In terms of any potential “impropriety” in Mueller’s office, cited by multiple committee Republicans, Rosenstein said he was not aware.
“I am not aware of any impropriety. Special Counsel is subject to oversight by the Department of Justice and I’m not aware of any violations of those rules,” Rosenstein said. “Appearance is, to some extent, in the eye of the beholder. We apply the department’s rules and regulations, and career ethics attorneys provide us counsel on that.”
Rosenstein underscored that he, Mueller and FBI Director Chris Wray are "accountable" and will ensure "no bias" in the special counsel's findings.
Brooke Singman is a Politics Reporter for Fox News. Follow her on Twitter at @brookefoxnews