BREAKING: Netanyahu Presents Iran's Own Documents to Prove They Tried to Build a Nuclear Bomb and Lied About It 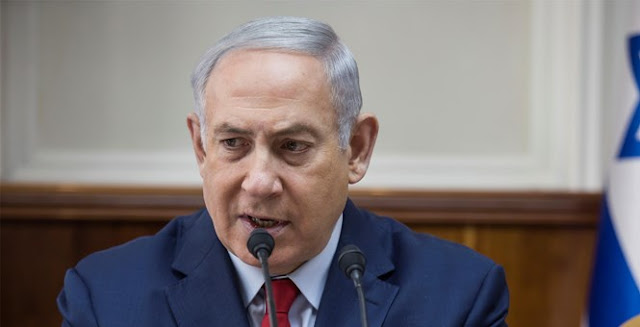 Speaking from Tel Aviv Monday afternoon, Israeli Prime Minister Benjamin Netanyahu showed the world that Iran had a secret nuclear program, one they say never existed, before lying about it and signing the 2015 nuclear agreement under the Obama administration.

"Iran is brazenly lying when it says they never had a nuclear weapons program," Netanyahu said.

Standing in front of a power point presentation labelled "Project Amad," Netanyahu revealed Israeli intelligence confiscated 100,000 documents from a secret location in Tehran. Those documents, many of which were in binders and on discs for visual reference, detail Iran's nuclear program through videos, blue prints, spreadsheets and more. The documents have been authenticated by the United States.

"This is just a fraction of the total material we have," Netanyahu said. "Iran lied about never having a nuke program. One-hundred thousand secret files prove that they lied."

Iran has always denied every having a nuclear program, but the files show the regime not only developed one, but had plans to put five Hiroshima sized warheads on ballistic missiles.

After lying about their existence, instead of destroying the files in 2015 when the nuclear agreement was signed, Iran moved to preserve the documents. In other words, to preserve their nuclear program.

"Even after the deal, Iran continued to preserve and expand its nuclear wepaons knowhow for future use," Netanyahu said.

The presentation comes just days before President Trump is expected to make a decision about whether to scrap or fix the Iran nuclear agreement. European allies have argued the deal must stay, while they admit there are serious flaws when it comes to the sunset provision, terrorism and Iran's destabilization of the region.

"President Trump in a few days time will make a decision about what to do about the nuclear deal," Netanyahu said. "I'm sure he'll do that right thing."

President Trump responded to Netanyahu's presentation at the White House shortly after Netanyahu concluded his remarks.

"This is not an acceptable situation," President Trump said from the Rose Garden. "In seven years, that deal will have expired and Iran is free to go ahead and create nuclear weapons. That is not acceptable. Seven years is tomorrow, that’s not acceptable. If anything, what Israel has done today in the news conference was right."

https://townhall.com/tipsheet/katiepavlich/2018/04/30/netanyahu-remarks-on-iran-deal-n2476009?utm_source=thdailypm&utm_medium=email&utm_campaign=nl_pm&newsletterad=
Posted by Frances Rice at 10:10 AM