How Democracies End: A Bureaucratic Whimper 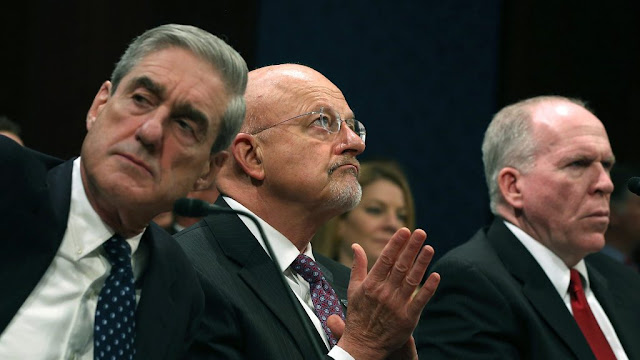 This is the way the world ends
Not with a bang but a whimper.
― T.S. Eliot

One strange trait of the die hard NeverTrump Republicans and progressives is their charge that Donald Trump poses an existential threat to democracy. Trump, as is his wont, says a lot of outrageous and weird things. But it is hard in his 16 months of rule to find any proof that Trump has subverted the rule of law.

Most of the furor is over what we are told what Trump might do, or what Trump has said, or which unsavory character in Europe likes Trump. These could be legitimate worries if they were followed by Trump’s anti-democratic concrete subversions. But so far, we have not seen them. And there has certainly been nothing yet in this administration comparable to the Obama-era efforts to curb civil liberties.

While we understand those on the left refuse to believe that a constitutional “legal scholar” like Obama would even think of allowing the executive branch to go rogue, it is indeed strange that in almost every NeverTrump attack on Trump’s conduct, there is almost no recognition or indeed worry that we have been living through one of the great challenges to constitutional government in our history.

Does anyone remember that the Obama Administration allowed Lois Lerner (“Not a smidgen of corruption”) more or less to weaponize the IRS to help the Obama 2012 reelection effort? Does anyone remember Eric Holder’s surveillance of the Associated Press journalists and Fox News’s James Rosen?

Why have conservative constitutionalists focused on what Trump has said rather than the strange treatment accorded to investigative reporter Sharyl Attkisson by U.S. intelligence and investigatory agencies? Do we even remember the Benghazi pseudo-video narrative and the strange jailing of Nakoula Basseley Nakoula?

Is there even curiosity about why and how the departing Obama Administration suddenly and vastly expanded the number of agencies that could have access to classified surveillance in its aftermath?

Do we remember the more than 20 times Obama warned before reelection that he was not a “king” and, as a constitutional scholar, could not by fiat offer blanket amnesties?

Do the authorities in California realize that they are resorting to the extralegal states-rights arguments that South Carolina on the eve of the Civil War and Alabama in the early 1960s used to nullify federal laws?

But stranger still is what we already know of the 2016 election, and the lack of outrage from constitutionalists, who daily warn us of what Trump might do—when we already know what the U.S. government has done in violation of civil rights, constitutional principles, and likely federal laws.

So far there is no information that Stephen Bannon ordered taps on reporters, or that Nigel Farage was hired by Trump to find Russian dirt on Hillary Clinton, or that Stephen Miller requested the unmasking of surveilled names associated with the Clinton campaign and then leaked them to the press.

But we do know that U.S. officials, including the head of the FBI and chief deputies in the Justice Department, misled a FISA court to obtain intelligence surveillance on U.S. citizens, by providing information that they knew at the time, but did not disclose to the court.

That information, by their own private admission, was unverified, compiled by a foreign national whom they had used and fired as an unreliable informant.

They also admitted that the unverified information was paid for by the Clinton campaign, and served as the basis for news accounts that were used in circular fashion to verify to the court the dossier’s contents.

We do know that members of the Obama intelligence and national security teams—Susan Rice and Samantha Power among others—requested the names of American citizens surveilled (likely obtained through improperly obtained FISA warrants) to be unmasked.

Then someone illegally leaked their names to the press to damage the Trump campaign and his presidential transition.

We do know that FBI Director James Comey, in succession, has admitted that he in singular fashion took notes of a confidential one-on-one meeting with the president.

Comey then briefed him on the existence of a campaign dossier on him and did not disclose that it was purchased by the Clinton campaign.

Comey also assured him that he was not the subject of a FBI investigation at a time either he or his subordinates were leaking the opposite to the media.

Then, after being fired, Comey leaked those memos (at least one of which was classified) to the media to ensure the appointment of a special counsel to investigate the president, who turned out to be a friend of Comey’s, Robert Mueller.

Comey by his own admission has also stated that he calibrated the FBI investigation of Hillary Clinton to the likelihood of her election to the presidency. FBI directors in a lawful society are not supposed to do such things.

We do know that the FBI placed some sort of an informant in the camp of Donald Trump’s 2016 campaign in association with gathering information about data used by a foreign national and a paid operative of the Clinton campaign, Christopher Steele, in his effort to collude with Russians against the campaign efforts of Donald Trump.

We do know that the deputy director of the FBI is currently under investigation for lying to federal investigators, on at least four occasions, about his own conduct in investigating candidate Hillary Clinton—at a time not long after Clinton-related political action committees gave several hundred thousand dollars to the political campaign of his wife.

We do know now that both James Clapper, Director of National Intelligence, and John Brennan, head of the CIA, knowingly gave false testimony under oath to Congress.

Clapper has previously lied about the surveillance of American citizens.

Clapper has lied about his knowledge of the Steele dossier.

Brennan also had lied under oath to Congress about the U.S. drone assassination program.

Brennan lied about leaking the existence and promulgation of the Steele dossier.

Brennan lied yet again to Congress that the dossier was not used to prompt a CIA investigation into so-called collusion.

Again, the government’s two highest intelligence officials did not tell the full truth about their knowledge of the Steele dossier or their own roles in promulgating its contents.

In a constitutional republic both such reprehensible officials who betrayed the public trust would be subject to criminal investigations for knowingly lying under oath to Congress and undermining the sinews of constitutional government.

We do know that senior Justice Department official Bruce Ohr met with the architects of the Steele dossier and that at the time his wife was working on the Clinton-purchased Fusion/GPS Steele dossier, information not disclosed as required by the law on a federal form.

Mueller’s special investigatory team, the House and Senate Intelligence Committees, and the media have not yet found any credible evidence of Trump-Russian collusion.

Indeed, it is more likely that the indictments and confessions of some Trump campaign officials and Michael Flynn, on counts having nothing to do with collusion, either will be dropped, retracted, or will not lead to convictions.

Because much of the information used against them was obtained by misleading a FISA court judge and through improper conduct at the highest level of the FBI.

There is a reason why over a half-dozen top FBI officials either have been fired, reassigned, resigned, or retired.

We have not yet seen the inspector general’s full report, but its publication may lead to more departures from both the FBI and the Justice Department, if not to criminal prosecutions.

1) Bill Clinton and the Clinton Foundation received large sums of money from Russian-related interests in association with ongoing requests to buy into companies that might control North American uranium stocks;

2) John Kerry has met clandestinely with members and former members of the Iranian government to craft joint strategies to save the so-called Iran Deal, from which the president of the United States just withdrew; and

We are all worried, on occasion, by nationalist and anti-democratic movements abroad in former democratic countries.

[T]he current and chief threats to Western constitutional government are not originating from loud right-wing populists in Eastern Europe, or from Trump wailing like Ajax about the rigged deep state.

Rather, the threat to our civil liberties is coming from supposedly sanctimonious and allegedly judicious career FBI, Justice Department, and intelligence agency officials. It's coming from progressive and self-described idealistic former members of the Obama national security team, and anti-Trump fervent campaign operatives, all of whom felt that they could break the law.

The democracy killing  lawbreaking by this cabal included illegally monitoring American citizens, and seeking to warp federal courts and even the presidential election because such unsavory and anti-constitutional means were felt necessary and justified to prevent and then subvert the presidency of Donald J. Trump.
It is willful blindness for progressives and NeverTrump Republicans to overlook what has happened only to damn what has not happened.

The dangers in America are not from transparent right-wing authoritarians (who are easily spotted in their clumsiness), but from mellifluous self-styled constitutionalists, whose facades and professions of legality mask their rank efforts to use any anti-constitutional means necessary to achieve their supposedly noble egalitarian ends.

This is the way democracies end—not with a loud boisterous bang, but with insidious and self-righteous whimpers.