The Trump Effect: American Freed From Venezuela And North Korea Summit On Track 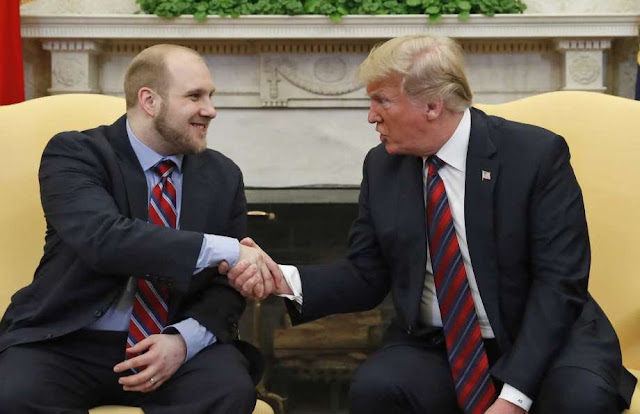 A MESSAGE FROM THE WHITE HOUSE

President Donald J. Trump, Navy-Marine Corps Memorial Stadium
Annapolis, Maryland
May 25th
·       In recent years and even decades, too many people have forgotten that truth.  They’ve forgotten that our ancestors trounced an empire, tamed a continent, and triumphed over the worst evils in history.

·    ·       In every generation, there have been cynics and critics who try to tear down America.  It's not working too well lately. But in recent years, the problem grew worse.  A growing number used their platforms to denigrate America’s incredible heritage, challenge America’s sovereignty, and weaken America’s pride.
·  ·         But we know the truth, we will speak the truth, and we will defend that truth.  America is the greatest fighting force for peace, justice, and freedom in the history of the world. And in case you haven't noticed, we have become a lot stronger lately.

·  ·         We are the nation that built the highways; the railroads; the Empire State Building, in one year; the Golden Gate Bridge; and we are the nation that built the Panama Canal.  We trekked the mountains, explored the oceans, and settled the vast frontier.  We won two World Wars, defeated communism and fascism, and put a man on the face of the moon.  We cured disease, pioneered science, and produced timeless works of art that inspire the human soul.

·   ·        Each of you enters service at a truly exciting time for our country.  For we are witnessing the great reawakening of the American spirit and of American might.

·    We have rediscovered our identity, regained our stride, and we're proud again.  Prosperity is booming at home, our economy is the strongest it's ever been, and our country has regained the respect that we used have long ago abroad.  Yes, they're respecting us again.  Yes, America is back.

·       ·    Secretary Pompeo laid out the Trump Administration’s new policy toward Iran by applying the strongest sanctions in history to stop the Iranian regimes aggression and halt their funding.

·    President Trump asked the Commerce Department to conduct a 232 Action investigation into whether our automobile industry was being undermined by imports, endangering our national security.

Click on the above to view a video link detailing the opening of the Jerusalem Embassy earlier this month. It features key interviews with our U.S. envoy and footage. We’re so proud of this team, and mostly, of our President. Another promise kept.
Posted by Frances Rice at 10:37 AM