If ‘Congress Shall Make No Law…’ Why Can Governors? 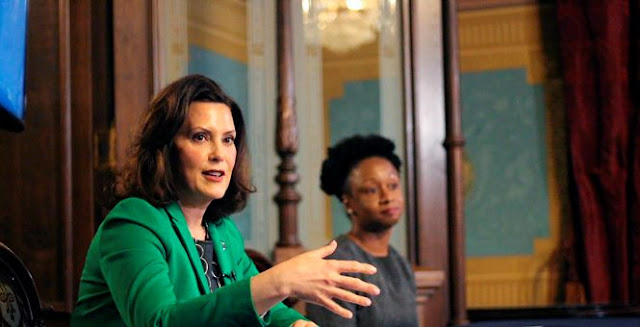 Source: Michigan Office of the Governor via AP

The First Amendment states, “Congress shall make no law respecting an establishment of religion, or prohibiting the free exercise thereof; or abridging the freedom of speech, or of the press; or the right of the people peaceably to assemble, and to petition the Government for a redress of grievances.” That’s unambiguous. Not “pretty unambiguous,” just unambiguous. Full stop. Yet governors across the country are ignoring or suspending almost every one of those rights enumerated at the top of the Bill of Rights, with little to no pushback from the press, which just happens to be the only part of the first two amendments not under assault.

It’s actually not under assault -- it’s gone -- suspended indefinitely in the name of “the common good.” Governors have declared coronavirus emergencies and wiped clean the rights our nation was founded for the purpose of putting those rights beyond the reach of government.

These suspensions were not done by vote; they were done with the stroke of a pen. Constitutionally, they can’t be done by either. There is no provision of the Constitution allowing for the waiving of rights under any condition, but most legislatures are content to sit back and watch this all proceed without their fingerprints anywhere near it.

Governors made a point of canceling Easter services, even at drive-in churches set up in parking lots. “You’re not allowed to leave your home,” they declared. The irony of placing innocent Americans under house arrest while releasing prisoners in the name of “compassion” was lost on journalists too busy expressing indignation that people might want to worship even in the face of a pandemic.

The same journalists were perplexed by why those same innocent Americans might want to exercise their Second Amendment rights, another right with which we are born that shall “not be infringed” that is being infringed all over the place without concern from the media. “Gun stores are non-essential” in a time prisons are being emptied seems like a set-up for a bad joke, not a public policy.

If you speak out against these usurpations of your rights, you will be condemned as “not caring” for the vulnerable. If you couple your right to speak with others in the public square by assembling to magnify your voice, you risk arrest or a fine, a hefty one in a lot of states. These steps are designed to quash your right to petition government for redress of your grievances – the government nullifies your other rights through the magic of a Montblanc pen (the powerful aren’t going to use a Bic, especially when taxpayers are picking up the tab).

Meanwhile, the press remains unencumbered by any of this. Unlike the people footing the bill and taking the hit, journalists are “essential employees.” Long having thought themselves better than everyone else, Democrats with press credentials happily condemn people for refusing to do what they’re told to do by people lacking the right to do it.

“The Constitution is not a suicide pact,” they say, but neither is it a permission slip for the murder of rights. Our rights cannot simply be waived in the face of anything. From the beginning of the country, government has been trying to do just that.

It’s the nature of government and those in power to attempt to amass as much of that power as possible, and the only way for that to happen is to take it from the people. Our Founding Fathers knew this and wrote the Constitution to guard against it as best it could be done, and still some of them were guilty of it themselves (see the Alien and Sedition Acts).

Since then, these incursions into our rights have generally been done with a small hammer and chisel, chipping away a little piece here, a tiny piece there, out of public view in legislation with pleasant-sounding names on matters of public concern: “We must fix this problem” *chip, chip chip* - “If it saves just one life” *chip, chip, chip* - etc.

These tend to go unnoticed for what they are, overwhelmed by the sense of urgency they’re generally coupled with. But this time, these same “caring leaders” aren’t using a hammer and chisel; they’re using dynamite. “This is going to change how we live our lives going forward,” is commonly heard now. That’s not how rights work.

The Constitution does not grant us rights, it acknowledges rights with which we are born. We can choose not to exercise them, but they cannot be taken away.

That’s not enough for many of these governors and their cheerleaders in the press. When governors started asking people to stay home, we did. We understood the reasoning. Then those requests became orders. Nothing much changed. Most people wanted to stave off the predicted horrors, so those orders were seen as akin to ordering the Sun to rise in the east. It was already happening, so it was basically meaningless.

But then either the predictions were wrong or compliance accomplished its mission, depending on your perspective, and people wanted to go outside. People wanted to stop the destruction of their livelihoods and return to work. That’s when they noticed the boot of government on their throats.

Now they’re taking to the halls of capitals, to the streets. Police are being ordered to put down offenders demanding their liberty back. Many police departments are refusing, but an alarming number of them are complying. It was impossible just two months ago for the answer to the jailhouse question of, “What are you in for?” to be answered with, “I went to the beach,” yet this is the reality under many Democrat Governors.

We will wrestle our freedoms back and soon. When we do, it’s important to remember not only who took them and why, but who tried not to give them back. From Maine to Michigan, from Illinois to California, they were progressive Democrats. They didn’t see coronavirus as a tragedy. They saw it as an opportunity. As Hillary Clinton said last week, “this would be a terrible crisis to waste.”

This is the Democrats’ nature: they know better than you do what you need, they are better than you are, smarter than you. Coronavirus just allowed a peek into their minds. Individuals are irrelevant to the left, as are your rights. The Constitution is an obstacle to be overcome, by any means available, not the restraint on their power it was written to be. Remember that come November…or you soon won’t be allowed to say it.
D
erek Hunter is the host of a free daily podcast (subscribe!), host of a daily radio show on WCBM in Maryland, and author of the book, Outrage, INC., which exposes how liberals use fear and hatred to manipulate the masses. Follow him on Twitter at @DerekAHunter.

Antibody Testing: Proves We've Been Had!