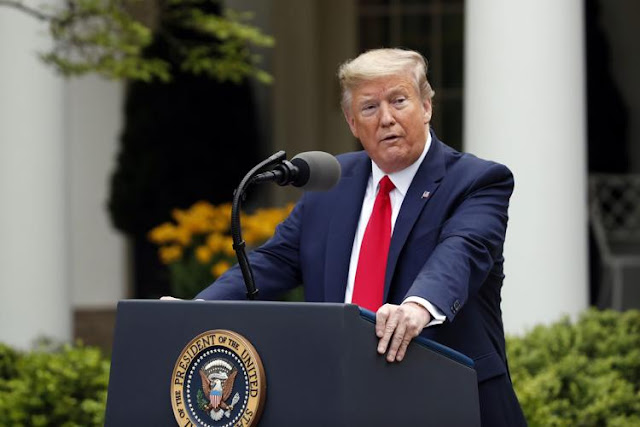 President Donald Trump speaks about the coronavirus in the Rose Garden of the White House, Tuesday, April 14, 2020, in Washington.  Alex Brandon / AP

“President Trump’s aggressive response to keep Americans safe from COVID-19 has given us a precious opportunity to utilize advanced therapeutics and medicines.”
– Health and Human Services Secretary Alex Azar

The rubric credo for democracy is “all government is local.” But what we are witnessing in the new progressive era is leftist national doctrine adopted by state governments to transform the beliefs of their voters to support liberal collectivism. State independence and the 10th amendment are being usurped into subliminal submission to leftist chauvinism. State policy has become irrelevant as we witness federal political ideology influence and supersede our individual states political sovereignty.

Since the introduction of common core, teaching the division of constitutional powers in our nation has morphed into teaching the merits of federalism. The effective cultivation of progressive social engineering and socioeconomic equality has replaced personal and civic responsibility. This logic negates critical Republican “reward for personal investment” ideology. The new norm is advocating that all problems are solved in Washington, which has eliminated the need for independent statism.

When President Donald Trump called out China for violating patent law and theft of our intellectual property, liberals became free trade zealots. They said this would kill their economies since they relied on Chinese imports. Instead, the Chinese economy tanked. China cried, "Uncle," and Trump secured the best trade pact we’ve ever had with China. Our economy emerged as the strongest in our history. Now liberals are using COVID-19 to ruin their economies and the lives of their voters before the next election.

When President Trump issued guidelines for states to develop programs to truncate the spread of COVID-19, GOP governors developed plans within guidelines established by Surgeon General Jerome Adams without much fanfare. Yet liberal governors across America and the left went into attack mode. They claimed Trump and the surgeon general violated their state rights. New York Gov. Andrew Cuomo told reporters: “Trump is acting more like a king and less like a president.”

President Trump was the first world leader to lock down borders to prevent a COVID-19 pandemic. Liberal state governors squealed like pigs in a bacon factory because they wanted to increase their head counts before the U.S. Census. Since congressional representation is based upon population, not citizenship, they’ve been gaining seats because of their open boarders and sanctuary city policies.

“California welcomes everyone who wants to share in the American Dream.”
– California Gov. Gavin Newsom

When the U.S., United Kingdom, Canada, France, Germany, Italy and Japan met to address containing COVID-19, they agreed to lock down borders. A week later, OPEC countries did the same. The EU held a summit the next week and agreed to shut down their borders also. While every global leader followed the same strategy as the U.S. to contain COVID-19, liberal governors refused to lock down their borders?

According to University of California-Davis epidemiologist Christine Johnson, there is no way to predict how deadly a pandemic will be if we don’t know the source. Since China cloistered information about this virus, each nation relied on secondhand data until it was revealed to the World Health Organization. Because of a lack of information, the liberal media have hand-picked what they wish to spin and how they spin it. They have had a field day providing liberal governors with cheeked facts they conveniently can use to blame Trump for the severity of COVID-19. Yet he had no more information than they did?

A study in France tracking outcomes of 20 patients given hydroxychloroquine and antibiotics has revealed half of them recovered. In reaction to this, doctors asked the FDA to approve hydroxychloroquine, a 65-year-old malaria drug, to treat severely ill COVID-19 patients. Trump consulted with the FDA and surgeon general. Both claimed evidence suggests these drugs could help since they worked to cure other viruses. As a result, the FDA approved hydroxychloroquine as a treatment to help the sick and dying.

“People are asking for help. If it works, we’ve saved lives. If it doesn’t, we’ve tried.”
– President Trump

In its approval letter, the FDA said, “With no established treatments available, trying anti-malarial drugs is worth a try.” It cited the actions of other countries that adopted hydroxychloroquine as a treatment for COVID-19 and its limited laboratory tests and clinical experience showed benefits for many patients. Nobody condemned FDA Chief Scientist Denise Hinton when she announced, “It is reasonable to believe that chloroquine phosphate and hydroxychloroquine sulfate may effectively treat COVID-19."

Despite the FDA approving this drug, liberal governors are attacking Trump? Nevada Gov. Steve Sisolak banned hydroxychloroquine. Michigan Gov. Gretchen Whitmer asked Congress to investigate Trump’s decision. She said action will be taken against doctors who prescribe hydroxychloroquine and those who fill the prescriptions. She demanded anyone offered hydroxychloroquine must report the doctor to the Department of Justice. New York's Cuomo said hydroxychloroquine could be used only as a last resort with his permission.

The liberal media also is having a field day with this, too. CNN said, “Trump is peddling false hope in our dark times.” The Washington Post, the Beltway bible, targeted Trump for agreeing with the surgeon general and the FDA: “All Trump is doing is giving these states snake oil, so they have a duty to protest this.” MSNBC’s Mika Brzezinski accused Trump of criminal fraud for his approval of the FDA authorizing hydroxychloroquine for treating the seriously ill even if they had no chance for survival.

Trump has said repeatedly these drugs ultimately might fail, but should be investigated as a last ditch effort to try and save dying Americans. But liberal governors are ignoring the surgeon general and the FDA’s endorsement that hydroxychloroquine could save lives and should be tried since nothing else has worked? Instead they have taken a united front against hydroxychloroquine because Trump agreed with the FDA. They are showing no regard for the health of their voters to discredit Trump for their political gain. They are placing their personal politics over lives to win an election.

This is the first time in our history that so many governors have put more value on winning an election than the lives of their residents. In the past, during a war or a national tragedy, our states collectively turned toward the federal government for leadership. And Washington provided them assistance to recover. Each state made sacrifices to help each other and worked for the common good of our nation. This empowered government and the free markets to work in union for the common good of our nation. Everyone was a winner.

Because, "united we stand, divided we fall.”
– John Dickinson

In Mark 3:25, it states, "If a house be divided against itself, that house cannot stand." We will never have a president who can carry the burden of a national tragedy alone. Nor will we ever have one capable of doing what is right for our states if they continue to abuse a national disaster for political gain. On Election Day 2020, let us remember those at all levels of government and both parties who did their best to save lives during this crisis – and let us never, ever forget those who stood in the way.

“Due to Donald Trump’s support, the HHS and the United States are leading the world in efforts to save lives. As we have always seen when America has faced a serious threat, American industry, academic institutions and government are delivering us what we need to win.”
– Alex Azar

https://www.thecentersquare.com/national/op-ed-liberal-governors-place-politics-over-lives/article_8a57a2d8-8fc2-11ea-9dc7-c314aacf08fa.html
Posted by Frances Rice at 8:39 AM