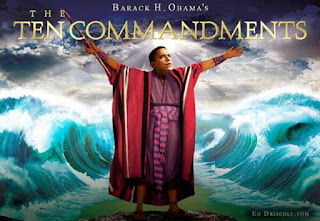 The best way for liberals to advance their various causes would be to take a pledge to live the rather progressive lives that they advocate. Here are a modest Ten Commandments to lend them credibility in the eyes of the American people.

1. Climate Change. Perhaps the greatest carbon emission sin is jet travel. On an average London-to-New York flight each passenger emits well over 1 ton of C02 emissions, an indulgence that can nullify a year of recycling of other less-privileged Americans. All supporters of government-mandated reductions in fossil-fuel emissions could at least take the following pledge. “I will fly across the Atlantic no more than once every five years.” Private jet travel — the worst of the mortal carbon sins — of course would be banned [1], at least until we can transition into solar and wind aviation. Al Gore in the middle seat of Row 44, fighting to put his oversized carry-on into the overhead compartment, would be a symbolic act worth far more [2] than all his heated and well-paid rhetoric.

2. Schools. Most liberals oppose charter schools, support teachers’ unions, and encourage generous immigration, legal and illegal. To further diversity in the schools, create easier integration, and to nullify the insidiousness of white privilege, each liberal should pledge, “I will put at least one of my children in an inner-city public school, or in a school where the white enrollment is in a minority.” What better way to acculturate a young elite to the new world around him? Could not the Obama children attend a D.C. public school?

3. Guns. Gun control is an iconic liberal issue, specifically limitations on handguns and concealed weapons. Too many guns in too many places supposedly encourage violent crime. Again, what better way to make a statement than by having all liberal celebrities, business people, and politicians take the following pledge: “I will pledge that no one in my security detail will ever carry a concealed firearm of any sort”? Surely the pope, of all people, did not need armed guards [3], with lethal concealed weapons, surrounding his pope-mobile?

4. Illegal Immigration. Liberals support the idea of unlimited immigration, legal or not. But the key for successful upward mobility for newly arrived immigrants, attested in nearly all studies, is integration and acculturation with American citizens. Therefore the following pledge seems ideal for any supporter of open borders: “I will socialize weekly with at least one illegal immigrant, whether inviting him to a sporting event, dinner, or recreational activity.” Were one upscale family to adopt an immigrant family from south of the border, the latter’s health care, legal, education, economic, and culture challenges might be alleviated. There are plenty of empty and mostly unused guest houses behind estates in Malibu and Santa Monica, and very few shelters for new arrivals: why not combine need and idleness — and help the helpless?

5. Sanctuary Cities. Most liberals support sanctuary cities and the idea of open borders, including the right of cities to nullify federal law. Why not pledge,  “I will swear support for all American cities that choose to nullify any federal laws that they find oppressive and somehow contrary to the idea of America”? When a cattleman shoots a wolf, and a county sheriff guffaws and claims “that’s a federal problem, not mine,” then we will have come full circle to the sort of disasters that occur in San Francisco.

6. Diversity. “White privilege” and “black lives matters” are slogans that resonate with liberals. Both could be reified with a simple pledge: “I will live in a neighborhood in which at least one of my immediate neighbors is a non-white household.” In addition, why not eliminate the idea of a gated community altogether? Why send not-so-coded signals that the Other is not wanted? (Could not the Obama administration put a $1,000,000 luxury tax on each of a community’s exclusionary gates?)

7. Voting Laws. For liberals, driver’s license IDs are unnecessary for registration or even showing up at the polls to vote. Why, then, not cement that pledge by sanctifying the uselessness of such IDs in everyday life? “As proof of solidarity, I pledge that I will not use my own driver’s license ID either during any commercial purchase or at the airport security line — both being far more important than mere voting.”

8. The Environment. West Coast liberals should do something to alleviate the effect of the drought, given that they have cancelled most of the secondary phases of the California Water Project [4] and released several million acre-feet of stored reservoir water into the ocean: “I pledge that I will not use any water that is stored in, and transferred at great costs from, a man-made, artificial reservoir, especially those at great distances built in sensitive areas such as Yosemite National Park.” There could even be an additional corollary: “I pledge that I will not waste precious water on my lawn or ornamental plants.” [5] (One sees lots of new plastic, artificial lawns in Fresno, which has a vast aquifer, but almost none in Palo Alto and Atherton, which do not). Can one imagine Woodside or Los Altos with Astroturf?

9. The University. The university is a bastion of liberalism and therefore must reflect such progressive values. “I pledge to support no university whose rate of increase in annual tuition exceeds the rate of inflation [6] or that pays different wages to different categories of professor for the exact same class taught.” Why not boycott Harvard or Berkeley, given that their part-time policies make Wal-Mart’s look enlightened?

10. Affirmative Action. Affirmative Action is a bedrock liberal issue, especially the idea of changing evaluation criteria on the basis of perceived social need. Why not strengthen a commitment to affirmative action in deed as well as word, given the insidious nature of white privilege that gives a leg up to white elite youth in a way impossible for the children of the Other?  “I pledge that at least one of my children will enter a reverse affirmative action program by refusing admission to any school that admits only 10% of its applicants. Instead he will only enroll in a more egalitarian one that admits 90% of its applicants.” And for those who cannot live up to their rhetoric, why not at least a lesser oath, “I promise to use no backdoor pressure — alumni, legacy, private phone call, quid-pro-quo — to help my college-age children circumvent the admission process in a way that is unavailable to others”?

Given that these pledges do not reflect current liberal behavior, apparently abiding by them would mean that there would soon be no more liberals.