Let us now damn the 20th anniversary of the Million Man March with faint praise. The rally was organized, like the 1995 march it commemorated, by Louis Farrakhan’s Nation of Islam. 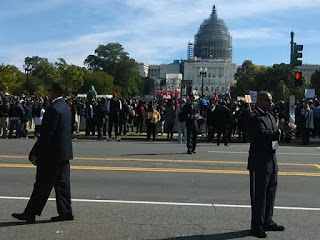 “Thousands pack D.C. for the 20th Anniversary of the Million Man March” reads USA Today’s coverage. That, I think, was accurate – thousands, and nowhere near a million, came.

Perhaps to make the crowd seem bigger, the heavily organized and herded attendees were stretched in a long, medium wide column along the national Mall. They were not allowed to fill it out, with lots of empty space on the sides.

As a result giant TV monitors and speakers were needed, set up every few blocks between the various parts of the Smithsonian and various art galleries, for those so far away they could not see the stage under the Capitol. The sound system was bad, with speakers reverberating with echoes that made it difficult to tell what those on stage were saying.

Perhaps that’s why the crowd, such as it was, seemed bored. 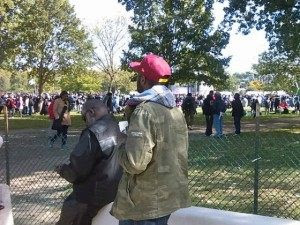 Even the speakers seemed uninspired. There was no rhyme, no rhapsody, no singing, no call and response. Outside of the speakers on stage the only sound was that of entrepreneurs hawking their wares: commemorative T shirts and arm bands; colorful, somewhat attractive artwork suitable for a home shrine to Farrakhan; and buttons bearing the silhouette of the African continent. 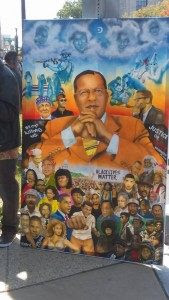 The only other sound was that of the many — mainly white — also using the Mall, tourists asking for directions, often with assorted foreign accents, and D.C.-yuppie bureaucrats and lawyers, using the Mall for its real daily use as a running track for Washington insiders.

Since it was the first day where temperatures had dipped into the 50s, the runners were wearing sweat shirts from various Ivy League and other elite universities. The Million Man Marchers themselves were not a downwardly mobile crowd, who though young, hipsterish and often dread-locked, wore garb that did not bespeak a life of poverty and struggle – T-shirts with slogans like Straight Out of Howard, in reference to D.C.’s historically black college, Howard University, were popular.

None of the mainly white interlopers seemed to have gotten the message that the Million Man March would be happening. Indeed D.C. yuppies were having their own festival, Taste of D.C., right beside the back end of the Marchers, on Pennsylvania Avenue, and a suburban Virginia county chapter of the National Organization for Women had a simultaneous rally for equality 25 miles away.

What little music I heard wasn’t good, and it wasn’t exactly Stevie Wonder or Chaka Khan.

Much of the first couple of hours consisted of people promising the crowd that Farrakhan would eventually arrive and speak to them, and many of the early speakers and singers were Hispanic, including one woman with long blond hair promising “Black and Brown Unity.” (The Atlanta Journal-Constitution headlined its coverage “The Million Man March’s understated inclusivity“.) It was a slightly odd theme in a year where illegal immigration and its impact on both the government services and the entry level jobs many African Americans depend on has become a hot topic.

Perhaps the unity was instead supposed to be about the other themes some on stage raised, like police brutality against minorities, summarized by one speaker as opposition to the “Blue Klux Klan.” One wonders if a purely race based, divisive, approach, led by someone with the resume of Louis Farrakhan, is the most likely way to  achieve criminal justice reform.

Ironically, the event, like most such events, required an enormous police presence to manage.

The Nation of Islam volunteers, men in either dark suits and bow ties, or in uniforms reminiscent of a 1950s movie usher, complete with red epaulets and embroidery, were politely keeping streets and sidewalks clear and giving directions, supplementing the police.

These volunteers, unlike the bored crowd, were in heaven, on a beautiful sunny day where they belonged and had a purpose. The crowd, a few of whom wore Afrocentric T-shirts and buttons or sported banners from socialist parties, didn’t seem to be mainly Nation of Islam adherents.

I suspect they wanted some more substantial fare about how more African Americans — facing rising unemployment  — could belong and have a purpose in the American economy, beyond wearing a funny suit and volunteering to do crowd control. I don’t think they got those answers; Ben Carson,