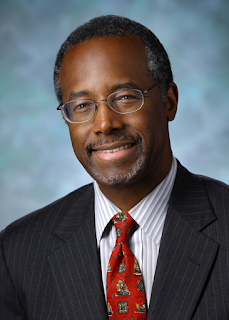 Ben Carson is hoping to awaken black voters to his campaign with a message of economic empowerment, saying the black community has been done a disservice by heeding political power overtures from Democrats.

Speaking to a small group of black leaders and activists last week, the retired neurosurgeon, who is surging in polling in the Republican presidential race, said he believes black Americans bring more power through the size of their bank account than by putting their “fist in the air.”

Mr. Carson said he generally shies away from focusing on race: “I say that’s because I’m a neurosurgeon, because everyone’s brain looks the same and it works the same way.”

But he said black voters should step beyond their allegiance to the Democratic Party.

“The Democrat Party, of course, is the party of the KKK. Of Jim Crow laws. And perhaps just as bad right now, of servitude. ‘Now you do this, and we’ll take care of you, pat you on the head, take care of all your needs.’ Which keeps people believing that’s what they actually need,” Mr. Carson told the small group.

Mr. Carson said he is an admirer of the late A.G. Gaston, a businessman in Birmingham, Alabama, who made millions of dollars that he used to help fund the civil rights movement. Gaston said his influence stemmed from his economic power.

“Republican candidates like Ben Carson, Jeb Bush, Carly Fiorina, Donald Trump and Marco Rubio all fail to understand these facts,” Mr. Tyler said. “While their adherence to an extreme ideology might play well to the tea party, they’re demonstrating that they’re out of touch not only with black voters, but with a majority of Americans on the issues that matter most.”

Mr. Carson, 64, is the only major black candidate in the presidential race this year. The Democratic field is comprised of a handful of white men and one woman, and the crowded Republican field has two men with Cuban parents, an Indian-American and a woman.

The activists who met with Mr. Carson last week said his campaign had a more serious ring than that of Herman Cain, who sought the 2012 Republican nomination before dropping out a month before the Iowa caucuses amid accusations of sexual harassment and marital infidelity.

Mr. Carson, though, starts off with credentials that are difficult to match, including a 2009 television movie, “Gifted Hands,” based on his life.

One of the activists at last week’s gathering, a self-described member of the millennial generation, said he and his classmates studied the doctor’s groundbreaking medical breakthroughs.

“We know exactly what it is you’ve done. We had to — we got graded on it,” the activist told Mr. Carson.

Mr. Carson has not had a major breakthrough among black voters, though he does run better than other Republicans.

Many analysts have lumped Mr. Carson, Ms. Fiorina and businessman Donald Trump together as a symbol of anti-establishment sentiment within the Republican Party. Combined, the three candidates account for about half of the Republican primary vote in some polling.

“There’s no question that people are tired of politics as usual. But I don’t think that in and of itself would be enough. I think they’re also looking for people who have accomplished things,” Mr. Carson told The Washington Times when asked about the comparison.

As Mr. Carson rises, he faces more scrutiny by the press. He spent much of the past week defending a comment he made on NBC’s “Meet the Press,” where he said a Muslim who believes in the primacy of Shariah law shouldn’t be president.

Opposing candidates in the Democratic and Republican parties criticized Mr. Carson, saying the Constitution doesn’t allow for a religious test to determine who may hold office.

Mr. Carson, however, said he wasn’t talking about defying the Constitution, but rather saying he doesn’t think Muslim beliefs fit well for a chief executive.

He said he would turn the question back to his critics.

“If they were to ask themselves, do they really in their heart of hearts believe that the tenets of Islam, including Shariah, are compatible with the United States Constitution — ask the people who are critics that question. And hold their feet to the fire. I bet they will not be able to answer.”

Speaking to the activists at last week’s event, arranged by Armstrong Williams, a Carson confidante, the retired doctor said he’d heard from “some of my Muslim colleagues who are very supportive.”

One of the activists, Akili West, a Muslim who is also an official with Mr. Carson’s USA First political action committee, said he faced questions from Muslim friends in the wake of the comments and was able to assure them that Mr. Carson is a man of faith whose objection is to Shariah law.

“It’s going to be great when people like you start speaking up — actually saying that,” Mr. Carson said.