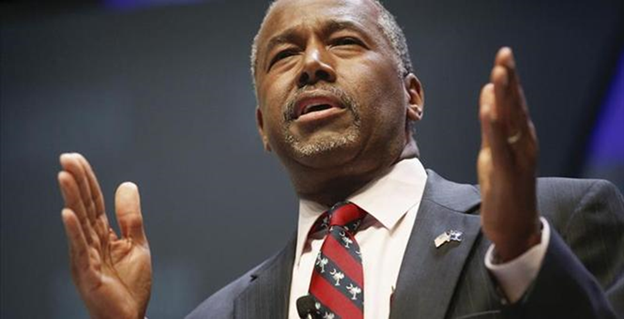 How about the next time the mainstream media decide to fabricate a controversy against a conservative presidential candidate, they choose something less laughable?
The media's latest faux gasp concerns Dr. Ben Carson's comments about the Oregon school shooting. When I first watched news reports on it, I didn't immediately grasp the reason for the fuss, not having the artificial sensibilities of the MSM.
Asked what he would do in a similar situation as the victims, Carson said: "I would ask everybody to attack the gunman because he can only shoot one of us at a time. That way, we don't all wind up dead." Not only did he not answer the way the media wanted but also he chuckled upon concluding his answer.
No one in his right mind would interpret Carson's uncomfortable giggle as a statement that he was laughing at the victims or is indifferent to their fate. Do I have to mention that he dedicated four decades to saving children's lives? Yeah, I thought so.
At the suggestion that he appeared tone-deaf and seemed callous, Carson said, "I'm laughing at them and their silliness," meaning the reporters asking him questions.
It rankles the media when candidates don't immediately cower when accused of this or that sin. Carson is particularly annoying to them, not only because he refuses to back down but also because he has the audacity, in their view, to espouse conservative views despite being African-American. Surely, we can all understand their frustration when blacks stray from the left's prescribed way of thinking.
Carson was not judging the victims; that doesn't even make sense. Almost everyone seriously laments the tragedy, and Carson, as a strong Christian, doubtlessly admires those courageous victims who identified themselves as Christians while knowing it would seal their fate.
Rather, Carson said he wanted to "plant the seed in people's minds so that if this happens again, you know, they don't all get killed."
When pressed about his response, Carson used the opportunity once again to criticize our stifling politically correct culture. He said: "We live in a culture now where people decide that everything you say -- 'we need to set up battle lines' and 'we need to get on this side of it or that side of it' rather than collectively trying to figure out how we solve the problem. It's sort of an immature attitude, but it seems to be something that's rampant in America today."
He is correct. In the first place, we wouldn't even be having this discussion if President Obama hadn't exploited the massacre to rail against guns, gun owners and those dastardly right-wingers who cling to the Second Amendment right to bear arms. If Obama and the left weren't so hellbent on confiscating the weapons of law-abiding Americans, we could spend more time grieving, offering our prayers and later -- after the dust has settled -- discussing these tragedies and possible solutions.
When interviewers showed an interest in Carson's ideas instead of trying to entrap him, it was obvious that he had given this serious thought, as he suggested that we need to study the lives of all the people who've carried out a mass shooting. He said we might empower psychiatrists and psychologists "to take the appropriate interventional steps." He would also seek a "mechanism" to keep weapons away from people whom mental health professionals have identified as dangerous, stressing, however, that "we cannot do anything that compromises the Second Amendment." Finally, he expressed his support for armed guards and armed teachers in schools, if appropriate.
Refreshingly, Carson again refuses to back down from the media's onslaught and even doubles down -- saying his experience in extracting bullets from victims has reinforced his conviction in the wisdom of the Second Amendment.
There is no way reasonable people would conclude that Carson was impugning the shooting victims. It's clear he was offering his ideas, in hindsight, on how people might handle such situations in the future.
The same media that castigated Carson for offering constructive ideas on this problem gave President Obama a total pass for lurching to his lectern to rail against guns and gun control opponents. Never once did they criticize him for his insensitivity and callousness, and he wasn't even responding to a question. He planned -- no, premeditated -- his stunningly inappropriate remarks and all but ignored the nation's and community's grief, choosing instead to lash out in anger at people who won't surrender to his demands.
I can confidently say that people are increasingly disgusted with the media's warped and biased perspective and their double standard to destroy conservatives and shelter liberals. Just consider the absurdity of the media's trying to turn this remarkably fine man into an ogre. Ben Carson's popularity increases in direct proportion to his refusal to cower in the face of such attacks and his resolve to stand on principle. This is one of the many reasons so-called outsiders are doing so well in the polls and will continue to. People have had enough of this nonsense.
http://townhall.com/columnists/davidlimbaugh/2015/10/09/the-medias-latest-phony-attack-on-ben-carson-n2063156/page/full
------

The Problem Isn’t Guns Or White Men
By Ann Coulter
The media act as if they’re performing a public service by refusing to release details about the perpetrator of the recent mass shooting at a community college in Oregon. But we were given plenty of information about Dylan Roof, Adam Lanza, James Holmes and Jared Loughner.
Now, quick: Name the mass shooters at the Chattanooga military recruitment center; the Washington Navy Yard; the high school in Washington state; Fort Hood (the second time) and the Christian college in California. All those shootings also occurred during the last three years.
The answers are: Mohammad Youssuf Abdulazeez, Kuwaiti; Aaron Alexis, black, possibly Barbadian-American; Jaylen Ray Fryberg, Indian; Ivan Antonio Lopez, Hispanic; and One L. Goh, Korean immigrant. (While I’m here: Why are we bringing in immigrants who are mentally unstable

?)
There’s a rigid formula in media accounts of mass shootings: If possible, blame it on angry white men; when that won’t work, blame it on guns.
The perpetrator of the latest massacre, Chris Harper-Mercer, was a half-black immigrant, so the media are refusing to get too specific about him. They don’t want to reward the fiend with publicity!
But as people hear details the media are not anxious to provide, they realize that, once again: It’s a crazy person. How long is this going to go on?
When will the public rise up and demand that the therapeutic community stop loosing these nuts on the public? After the fact, scores of psychiatrists are always lining up to testify that the defendant was legally insane, unable to control his actions. That information would be a lot more helpful before the wanton slaughter.
Product manufacturers are required by law to anticipate that some idiot might try to dry his cat in the microwave. But a person whose job it is to evaluate mental illness can’t be required to ascertain whether the person sitting in his office might be unstable enough to kill?
Maybe at their next convention, psychiatrists could take up a resolution demanding an end to our absurd patient privacy and involuntary commitment laws.
True, America has more privately owned guns than most other countries, and mass shootings are, by definition, committed with guns. But we also make it a lot more difficult than any other country to involuntarily commit crazy people.
Since the deinstitutionalization movement of the 1960s, civil commitment in the United States almost always requires a finding of dangerousness — both imminent and physical — as determined by a judge. Most of the rest of the world has more reasonable standards — you might almost call them “common sense” — allowing family, friends and even acquaintances to petition for involuntarily commitment, with the final decision made by doctors.
The result of our laissez-faire approach to dangerous psychotics is visible in the swarms of homeless people on our streets, crazy people in our prison populations and the prevalence of mass shootings.
According to a 2002 report by Central Institute of Mental Health for the European Union, the number of involuntarily detained mental patients, per 100,000 people, in other countries looks like this:
– Austria, 175
– Finland, 218
– Germany, 175
– Sweden, 114
– England, 93
The absolute maximum number of mental patients per 100,000 people who could possibly be institutionalized by the state in the U.S. — voluntarily or involuntarily — is: 17. Yes, according to the Treatment Advocacy Center, there are a grand total of 17 psychiatric beds even available, not necessarily being used. In 1955, there were 340.
After every mass shooting, the left has a lot of fun forcing Republicans to defend guns. Here’s an idea: Why not force Democrats to defend the right of the dangerous mentally ill not to take their medicine?
Liberals will howl about “stigmatizing” the mentally ill, but they sure don’t mind stigmatizing white men or gun owners. About a third of the population consists of white men. Between a third and half of all Americans have guns in the home. If either white men or guns were the main cause of mass murder, no one would be left in the country.
But I notice that every mass murder is committed by someone who is mentally ill. When the common denominator is a characteristic found in about 0.1 percent of the population — I think we’ve found the crucial ingredient!
Democrats won’t be able to help themselves, but to instantly close ranks and defend dangerous psychotics, hauling out the usual meaningless statistics:
– Most mentally ill are not violent!
Undoubtedly true. BUT WE’RE NOT TALKING ABOUT ANOREXICS, AGORAPHOBICS OR OBSESSIVE COMPULSIVES. We were thinking of paranoid schizophrenics.
– The mentally ill are more likely to be victims than perpetrators of violence!
I’ll wager that the percentage of the nation’s 310 million guns that are ever used in a crime is quite a bit lower than the percentage of mentally ill to ever engage in violence.
As with the “most Muslims are peaceful” canard, while a tiny percentage of mentally ill are violent, a gigantic percentage of mass shooters are mentally ill.
How can these heartless Democrats look the parents of dead children in the eye and defend the right of the mentally deranged to store their feces in a shoebox, menace library patrons — and, every now and then, commit mass murder?
http://humanevents.com/2015/10/07/the-problem-isnt-guns-or-white-men/?utm_source=coulterdaily&utm_medium=email&utm_campaign=nl
Posted by Frances Rice at 6:24 PM