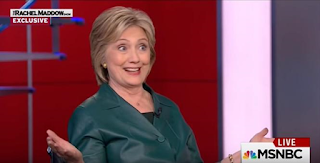 [Clinton] cautioned that “it’s not been as widespread as it has been made out to be” on MSNBC’s “Rachel Maddow Show” on Friday. The former first lady blamed Republicans for using the issue as part of an “ideological agenda” and said they want the VA to fail. “Now nobody would believe that from the coverage you see, and the constant berating of the VA that comes from the Republicans, in – in part in pursuit of this ideological agenda that they have,” Clinton said. “They try to create a downward spiral, don’t fund it to the extent that it needs to be funded, because they want it to fail, so then we can argue for privatization.”

Before we proceed any further, kindly allow me to remind you that Hillary Clinton's party is currently filibustering a bill that funds the VA, using America's veterans as a bargaining chip to try to force Republicans to agree to unrelated spending increases. President Obama is engaged in similar "hostage taking," having just vetoed bipartisan defense legislation that, among other things, would pay the troops. Setting that aside, let's address Mrs. Clinton's arguments one by one:

(1) The VA's struggles are attributable to the GOP's refusal to adequately fund the agency, with its failure being a deliberate ideological goal. Wrong on all counts.  The VA's problem is not underfunding; its budget nearly tripled between 2000 and 2012, outpacing both the rate of medical price inflation and new patient demand.  In the wake of the VA scandal, which shocked and angered Americans, Congress earmarked billions in additional funds for the agency.  The wait time problem has gotten worse.  Providing quality healthcare to the veterans who've earned our help is a bipartisan priority.  It's one of the few forms of government-run healthcare that both sides agree is appropriate.  The VA mess has nothing to do with Republican ideology or insufficient government expenditures.  It's failing all on its own, under the crushing weight of bureaucratic excess, inefficiency and corruption.

(2) The VA scandal itself has "not been as widespread as it has been made out to be."  By what possible metric?  The agency's Inspector General has called the wait time manipulation abuses "systemic" in nature.  Here's a Daily Beast headline from last spring: "VA Admits Fraud is 'Systemic.'"  USA Today: "Delayed care is everywhere."  Another IG report published this fall concluded that, "more than 300,000 American military veterans likely died while waiting for health care -- and nearly twice as many are still waiting...[the report] says 'serious' problems with enrollment data are making it impossible to determine exactly how many veterans are actively seeking health care from the VA."  Once again, the already-unacceptable wait times have increased.  "Not widespread," Hillary shrugs.

(3) Those veterans who do manage to get care are satisfied with their treatment.  Some veterans do get good quality care from the VA.  Others have had decidedly negative experiences.  The trouble is that far, far to few of them receive timely care.  That's the whole problem -- the chronic, broad-based cover-up of which exploded into a major scandal.  Clinton denounces (and overstates) Republicans' desire to "privatize" the VA, but guess who favors increased private options within the system?  The vast majority of veterans, according to poll reported by the Military Times in February.

Hillary Clinton tries to lay this abject failure of big, corrupt, inept government at the feet of her political opponents, relying on flimsy evidence and outright distortions to do so.  Her mistaken belief that the scope of the VA scandal has been overblown by Republicans betrays a fanatical partisanship and unbending ideological commitment to the proposition of ever-expanding government, no matter how stark and tragic its failures may be.  She is wholly incapable of fixing a problem that she willfully refuses to even acknowledge; the result is crippling denial, coupled with partisan point-scoring.  Her callousness and cluelessness demonstrated in the clip above present an opportunity for conservatives to build both a political case against her as a candidate, and an ideological case against sprawling, unaccountable Statism. The ponderous federal bureaucracy can't even properly execute critical, consensus tasks on which virtually all Americans agree. Perhaps we shouldn't be empowering them with even more authority and responsibility.