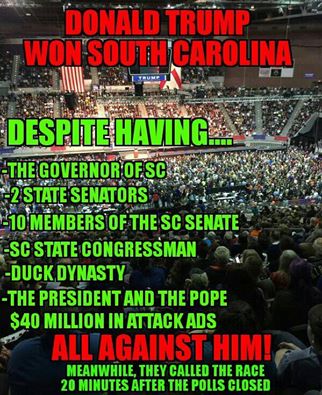 The American people of all persuasions, color, race, age, gender, and creed are in support of this man.
It is time the Republican Party get behind the people and stop expecting the people to get behind them.
My goodness, this man is winning by huge margins of the voting public. Commonsense Conservatism is real.
He is not coming in second or third and claiming victory.
He is winning, and huge. He won all 7 voting districts, received all 50 electoral delegates. That's never been done before in South Carolina. It's the people speaking their minds and hearts.
People, I ask you to ponder something: Those running against him have all been in politics and political office (except for Ben Carson) for most of their lives and have gotten us where we are now, or at least haven't been able to stop or change anything. If they are elected to this office why will it be any different?
Let's give Mr. Trump an opportunity. He certainly seems to have the ability to make things happen and just may do exactly what he says he will do. The others have all been trying to no avail. Why should we let them be president and keep doing the same and expecting different results?
It is entirely possible that we may be electing another Andrew Jackson, who went to Washington hated by the establishment but loved by the people and turned the entire system upside down and inside out, fired hundreds of Federal employees and eliminated their departments and jobs. When he left office, the nation was debt free, corruption had been routed out, the government was made lean, the military mean, and respected the world over. The Federal Government was owned by the people again because he did it for the people.
I am a Conservative, having worked in the Barry Goldwater campaign in Oklahoma (winning there). I am convinced that Mr. Donald John Trump will be a modern day Andrew Jackson, political correctness be hanged.
Please help Donald "Andrew Jackson" Trump become president. Also, he is the only person asking for the job who, in almost every speech, tells the people, "I love you."
Posted by Frances Rice at 3:25 PM