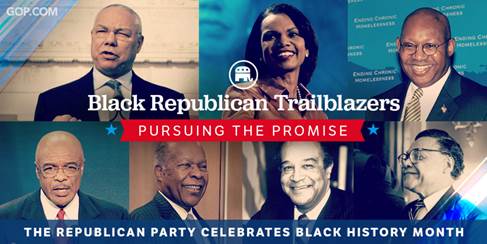 As reported in an article in the Daytona Beach Journal, Priebus made an appeal for more black voters at an awards luncheon at the Bethune-Cookman University. Priebus cited Abraham Lincoln and emphasized the GOP's historical claim to being a party of inclusion. Below Photo: News-Journal/David Tucker 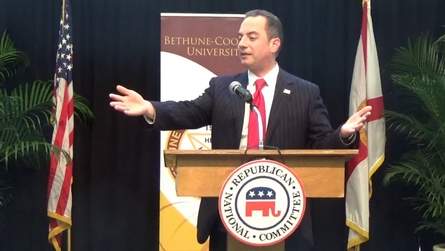 
Here is a quote from the article published in the Daytona Beach News Journal:
Three of the first four finishers in the Republican Iowa Caucus featured faces of color — Cuban-Americans Ted Cruz, Marco Rubio and African-American Ben Carson. That's not lost on Tyson Brown, a Bethune-Cookman University student. "I believe that's an important point," he said. "It is a first step to getting more black people and people of color to the Republican side." Ever since losing the 2012 presidential race, with an overwhelming majority of African-Americans and Latinos siding with the Democrats, the Republican Party has devoted time and resources into outreach such as Thursday's 4th Annual Black Republican Trailblazer Awards Luncheon at Cookman's Mary McLeod Bethune Performing Arts Center.

Below is an article that appeared in the Black Enterprise Magazine.
﻿
_____________
﻿
By Hailey Wallace
On Thursday, February 4, the Republican National Committee will recognize Black History Month with the 4th annual Black Republican Trailblazer Awards Luncheon. The awards ceremony will be held at prominent HBCU Bethune-Cookman University in Daytona, Florida.
This year’s theme is Pursuing the Promise. Notable GOP heavyweights will convene to watch RNC Chairman Reince Priebus present the Trailblazer Award to this year’s honoree, former Secretary of Housing and Urban Development, Alphonso Jackson. Jackson will be honored for his significant contributions to the Republican party through his prolific public sector work.
Jackson first entered the public sector when he was appointed president of the Dallas Housing Authority, making history as the first African American to hold the position.  A tireless advocate for the city’s poverty-stricken residents, he worked to desegregate the city’s public housing properties, revitalize crucial revenue-generating commercial properties, and secure the return of a major supermarket to West Dallas, which has gone years without one.
Jackson returned to the public sector in 2001 when he was appointed Deputy Secretary of the U.S. Department of Housing and Urban Development (HUD) by President George W. Bush. In 2004, Jackson again made history when he became the fourth African American to serve as HUD Secretary. During his tenure, he worked to empower black-owned businesses, increasing the percentage of HUD contracts awarded to black businesses from 14% to an impressive 25%.
Past Trailblazer Award honorees have included Sen. Edward Brooks, Sen. Tim Scott (currently in the news for his endorsement of Hispanic GOP presidential candidate Marco Rubio), Rep. Will Hurd (R-TX), and Rep. Mia Love (R-UT).
This year’s awards ceremony is one of many testaments to the RNC’s commitment to rectify the mistakes of the 2012 presidential election when the minority vote seemed to be little more than an afterthought. Republican party leaders have been making a huge push for minority inclusion with RNC Chairman Reince Priebus urging his fellow party members to ramp up their outreach efforts, while earnestly insisting that “black lives matter.” Priebus has traveled to HBCUs all over the country, helping to launch College Republican chapters to increase the GOP’s engagement and accessibility to young black voters.
Time will tell if the RNC’s efforts pay off in November. But their renewed commitment to inclusion, as well as a refocused take on the issues affecting the black electorate, has undoubtedly helped propel the GOP’s efforts to reflect the changing demographics of the country.