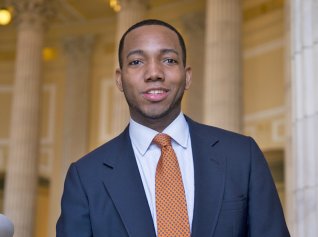 ﻿
Hillary Clinton refuses to support the one policy that could make an immediate impact and difference in the lives of millions – expanding school choice.


Hillary refuses to believe that parents should have the right to choose the best education for their children. Black voters know that Hillary Clinton can’t be trusted, particularly after a number of social media ploys and flip-flops on issues such as educational reform.
The Wall Street Journal writes: Hillary Clinton hopes the African-American vote is her political firewall against Bernie Sanders, especially in next Saturday’s South Carolina primary. So she’s going all out to show she’s a champion of black economic opportunity—except for endorsing the one policy that would make the most difference… Mrs. Clinton refuses to address the main reason that so many black children lack a quality education: failing public schools, with no chance to escape to a better one. Not too many years ago Mrs. Clinton understood this enough to support charter schools, if not private vouchers. But in this election year she has become a charter critic, attacking them for not taking all comers even if they rescue tens of thousands each year. In return she has received the unusually early endorsements of both the American Federation of Teachers and the National Education Association. Those endorsements may help her beat Mr. Sanders, but they also create an opening for Republicans in the fall: Her talk about opportunity is empty as long as she dooms poor minority children to failing schools. Read more HERE. In Ohio, the RNC kicked off Black History Month celebrating the contributions of African Americans to their communities, the Republican Party, and the country. The Dayton Daily News reports: Republican National Committee (RNC) Chairman Reince Priebus highlighted a new direction for the party in terms of reaching out to the black community in remarks made during a Black History Month celebration in Columbus. The event was co-hosted by the Republican National Committee and the Ohio Republican Party, and was organized to honor black Republicans from Ohio, and release details regarding “statewide engagement efforts in communities of color, and recruited applicants for the Republican Leadership Initiative (RLI),” Priebus said before making his remarks, which were delivered via video as his flight to the event was cancelled due to the inclement weather … The discussion at the RNC event turned towards the RLI recruitment initiative that the GOP hopes to see blossom in Ohio and places like Butler County where the base does very well. Read more HERE. 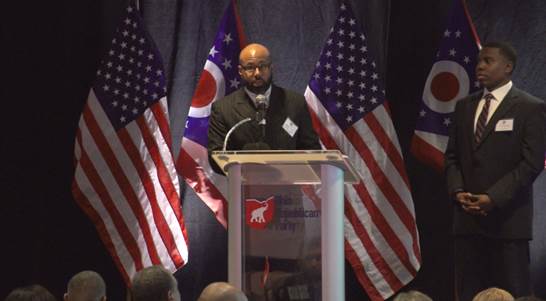 James Evans, chairman of the Republican Party of Utah and a graduate of Tuskegee University, a historically black University (HBCU),writes at NBC News/NBC BLK that the RNC will continue to compete for every vote in black communities across the country: Progress takes time and investment, which is why the Republican National Committee (RNC) got started right away with engaging black voters around the country after the 2012 presidential election. Since 2013, the RNC, under the leadership of Chairman Reince Priebus, has developed and executed a strategy to compete for the black vote, a strategy with results that point to a brighter future for the Republican Party and the country. Republicans earned double digit support from black voters in the 2014 midterm elections, which was an increase from 2012. While there is more work to be done, we cannot ignore the successes that have been achieved. To put it simply, the vision of how the Republican Party can best connect with black voters through the places where they live, work, watch and worship has been working. The RNC has listened and learned, and is inviting black voters to join us in 2016. Read more HERE. 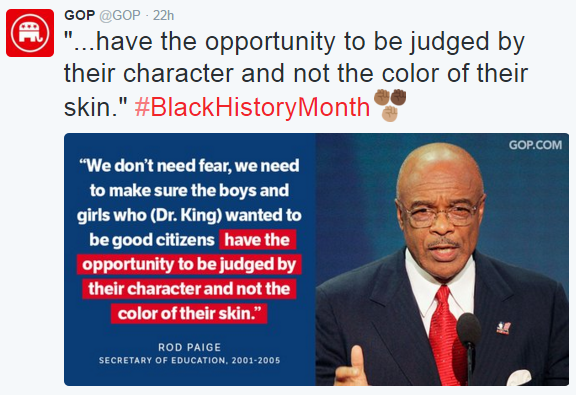 
Two new national polls show the once inevitable frontrunner in free fall against Bernie Sanders, with one survey giving the Vermont socialist a three-point lead over Clinton. The polls all also show Clinton losing to nearly every GOP candidate in general election matchups and facing “record high” unfavorables.


·         A new Fox News poll shows Bernie Sanders taking a three point national lead over Hillary Clinton after trailing by 22 points as recently as two months ago. FOX News reports: Bernie Sanders now tops Hillary Clinton in the race for the Democratic nomination.  The latest Fox News national poll finds 47 percent of Democratic primary voters now back the Vermont senator, up from 37 percent in January.  Clinton gets 44 percent, down from 49 percent a month ago. This is the first time Sanders has been ahead of Clinton, who not long ago was regularly described as the “presumptive Democratic nominee.” Clinton led Sanders in the Fox poll by as many as 46 points last summer, and had a 22-point lead as recently as two months ago. “One thing that is clear from our poll -- and others -- is that Clinton has been losing support and Sanders has been gaining,” says Democratic pollster Chris Anderson.  “And this process appears to have accelerated since the contests in Iowa and New Hampshire.”


·         A new NBC/WSJ poll shows Clinton’s lead cut by more than half and facing “record high” unfavorable numbers. The Wall Street Journal reports: Sen. Bernie Sanders has cut Hillary Clinton’s once-commanding national lead in the Democratic primary race by more than half over the last month, a new Wall Street Journal/NBC News poll finds. Mrs. Clinton, the former secretary of state, drew support from 53% of people who expect to vote in Democratic primaries, while 42% picked Mr. Sanders. That 11-point spread is much closer than the 25-point advantage Mrs. Clinton enjoyed a month ago, when the poll found her ahead by 59% to 34%. The new poll found that Mrs. Clinton holds a solid but diminished lead among her core group of supporters: women … The poll points to a long-term challenge for Mrs. Clinton in the continued rise of negative feelings about her among the broader electorate. Half of the people surveyed said they felt negatively about her, a record high for her. More than half said they would feel uncertain or pessimistic if she won the White House.


Warning Signs Ahead For Clinton In South Carolina


In South Carolina, polls show there are warning signs ahead for Hillary Clinton’s campaign. Bloomberg: But the survey also carries warning signs for Clinton about where the loyalties of white Southern Democrats lie as the campaigns prepare for the crush of Super Tuesday contests just three days after South Carolina’s Feb. 27 primary. And it underscores how crucial it will be for Clinton to sustain her lead with black and Hispanic voters, and turn them out, in those contests and beyond.


Hillary Clinton refused to rule out lying to the American people. The Washington Examiner reports: Hillary Clinton was put on the spot in a Thursday interview with reporter Scott Pelley when he asked the Democratic presidential candidate if she had ever lied to the American people. Pelley, the host of CBS Evening News, mentioned former President Jimmy Carter's famous promise that he would never lie to the country, then paused for Clinton's response. "I have tried in every way I know how literally from my young lawyer years to time as secretary of state to level with the American people," Clinton said in the interview that aired Thursday night. The journalist followed up by asking the Democratic front-runner if she had always told the truth to Americans. Clinton replied, "I've always tried to, always, always." A visibly frustrated Pelley doubled down, telling Clinton again that Carter did not say he'd always tried, but promised he would never lie. He asked Clinton if by not being specific she was giving herself "wiggle room." "You're asking me to say I have never, I don't believe I ever have. I don't believe I ever will. I'm going to do the best I can to level with the American people," Hillary said, conclusively. 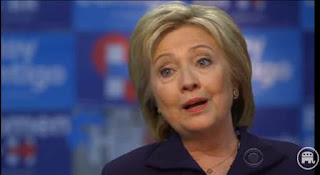 
Republican National Committee (RNC) Chairman Reince Priebus released the following statement on Hillary Clinton’s hypocrisy on Supreme Court appointments during last night’s MSNBC town hall: “Hillary Clinton’s hypocritical and defiant response for her unprecedented vote to filibuster a Supreme Court nominee proves she would rather put the Democrat Party’s liberal agenda ahead of the American people.  Clinton’s double standard on Justice Scalia’s replacement is exactly why the American people should have a voice in selecting the next Supreme Court Justice.  In eighty years there has not been a nomination and confirmation to the Supreme Court in a presidential election year and now is not the time to break that bipartisan precedent – the American people should have their voices heard and the next justice should be selected by whomever the voters choose as the next president.”


WATCH: Clinton Defends Vote To Support Alito Filibuster: “You Get To Use The Rules” 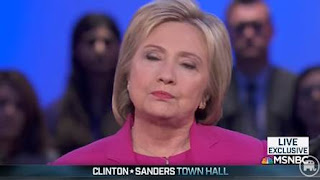 Derrick Jackson at the Boston Globe writes that Hillary is in deep trouble with black voters given her record: But she is running on a fundamental and untenable racial contradiction. She claims she will fight “systemic racism” at a time when the system and Bill’s role in it is under a fresh microscope from a new generation represented by the Black Lives Matter movement. At some point, the firewall cannot hold back the flames the Clintons fanned.


·         The Charleston Post & Courier: In South Carolina, Sanders Closes The Gap On Hillary
·         CNN: After Starting With A Lead Of More Than 50 Points Nationally, Hillary Is Now Tied With Sanders
To The Left, To The Left!

Hillary Clinton is under fire from the New York Times for not joining Bernie Sanders in support of a $15 minimum wage. The New York Times editorializes: Instead of embracing $15, Mrs. Clinton fights on for $12, saying that states could set their own, higher minimums. That is cold comfort. Experience has shown that without a robust federal minimum, state minimums also tend to be inadequate. Today, 21 states still do not have minimums higher than the federal level, and of the 29 that do, none have minimums high enough to cover local living expenses for an individual worker. Worse, Mrs. Clinton’s stance misses the big picture, which is that the risk in keeping the minimum too low is bigger than the risk of raising it too high … Economic obstacles are not standing in the way of a $15-an-hour minimum wage. Misplaced caution and political timidity are. The sooner Mrs. Clinton overcomes those, the stronger her candidacy will be.
Not So Great After All

Despite Hillary Clinton’s attacks on Bernie Sanders’ disloyalty to President Obama, Hillary refuses to call him a “great” president. With the current economic landscape of declining incomes, poor wage growth, more Americans in poverty and a disappearing middle-class, no one can call the economy "great." Despite a poor record of achievement and even a refusal to declare his presidency "great," Clinton has awarded the Obama administration an "A" grade. Click HERE for more from RNC Research.

President Obama is finding his Supreme Court posturing hard to defend given his 2006 filibuster of Justice Samuel Alito. Reuters reports: Republicans have pointed out that Obama and members of his cabinet, who were then in the Senate, were not above trying to block the Supreme Court nomination of Justice Samuel Alito by then-President George W. Bush in 2006. "While he complained about filibusters today, he joined filibusters while in the Senate," said Don Stewart, a spokesman for Senate Republican Majority Leader Mitch McConnell. Asked about his record, Obama acknowledged Democrats have played politics with nominations, too, through what he described as "strategic decisions" that ultimately did not block the president's nominee.