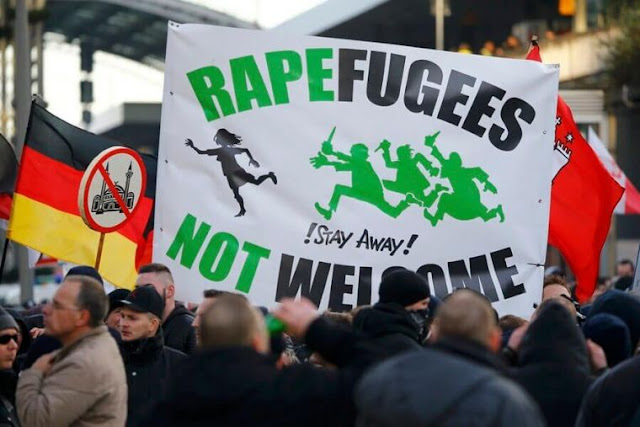 
A gang of up to a hundred black-clad masked men marched in central Stockholm on Friday evening, singling out and beating up immigrants, and handing out leaflets threatening further violent attacks against unaccompanied refugee youth.  [ . . . ]


According to Aftonbladet newspaper, men were distributing leaflets on Friday evening with the slogan “It’s enough now!” which threatened to give “the North African street children who are roaming around” the “punishment they deserve.”


The mood in Europe is starting to sour on immigration almost by the day. So far, thankfully, this kind of organized violence has been relatively rare. But even responsible political leaders are starting to make it clear that immigrants are no longer so welcome. Sweden, Finland, and Germany have all taken action in the last week to accelerate deportations and deter further immigration; now Austria is joining in. Reuters reports:


. . .The government announced this month that it would cap the number of asylum claims at 127,500, or 1.5 percent of the country’s population, over the next four years.


Now the government has decided to carry out at least 50,000 deportations in the same period. . .


Stories like these are an indication of how badly the European elite has lost its way over the last few years. Making grandiose statements about the right of asylum, lecturing citizens for their prejudice and narrow-mindedness, and pursuing open borders in the face of unprecedented demographic pressure: It was never going to last. And now, Stein’s Law seems to be kicking into action: Trends that can’t continue, won’t.


The problems of migrants and refugees are real, and the desperation of people fleeing war in their homelands is something to which no good human being can be indifferent. Yet it is also true that the only thing that makes legal rights possible is a human community bound by law and solidarity. In modern Europe, that is the nation-state. Europe spent the last few hundred years sorting itself into polities that were relatively ethnically homogenous, in a process that led to stable communities with the protection of laws—but at the cost of unprecedented bloodshed. And those states—like all human communities—are both enabled and limited by the ideas, associations, culture, and history of those who compose them.


However much the idea appeals to cosmopolitan utopians, it is not possible for such human communities to accommodate levels of migration beyond some ceiling. That ceiling is variable, and when there are large cultural and religious differences between the native population and newcomers, the ceiling drops.


The European elite’s reckless disregard for the very real limits on the Continent’s political and psychological ability to receive migrants, and the shortsightedness of arrogant policymakers who charged on without an understanding of public sentiment, is going to cost Europe—and migrants—dear.


The U.S. is also heading for this kind of reckoning: Immigration and refugee policy have become detached from public sentiment and the backlash is gathering force. In both the U.S. and the EU, there is a rising sentiment in public opinion that elites are deliberately and consciously taking steps that will change the demographic and cultural balance of the countries they oversee. This is the kind of soil in which poisonous plants grow well, and one can watch them growing on both sides of the Atlantic.


Both the U.S. and the EU need new conversations about migration and immigration, and elites are going to have to dial back their enthusiasm for policies that rest on an increasingly frail basis of public support. Spouting liberal clichés and accusing one’s opponents of racism won’t help. Rather, elites must listen much more carefully to the message that many in the U.S. and the EU are trying to convey.
http://www.the-american-interest.com/2016/02/01/europes-waning-welcome/
Posted by Frances Rice at 2:02 PM