By Frances Rice
President Barack Obama prosecuted Jeffrey Sterling, a black CIA agent, for violations of national security laws.  Yet, during an TV interview, Obama gave Hillary Clinton a pass, even though she is under FBI investigations for far more egregious violations of national security laws by storing classified information on a personal server in her home.
The Hill reports: A former CIA officer serving jail time for leaking documents to the New York Times accused federal officials of setting a double standard by apparently refusing to aggressively prosecute Hillary Clinton. Clinton was “a high ranking official who should know better, but completely given a pass, and almost an apologetic pass,” Jeffrey Sterling, who was found guilty of leaking classified information to Times reporter James Risen last year, said in an interview with the Washington Post published on Monday.  “So how should us regular citizens feel, especially with heightened concerns about national security?” The comments from Sterling, who is serving a 3.5-year prison term, come as an indictment of the Democratic presidential frontrunner’s controversial use of a “homebrew” email setup throughout her tenure as secretary of State.
Below is the complete Washington Post article.
_______________________
He was fired from the CIA and jailed for a leak. Now he’s trying to hang on.
By Matt Zapotosky 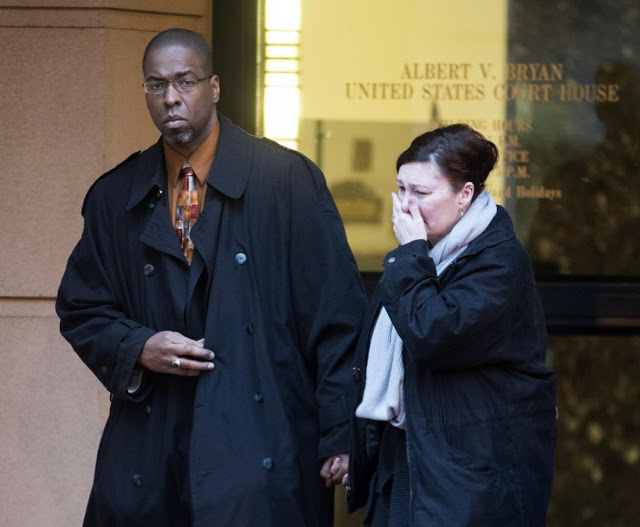 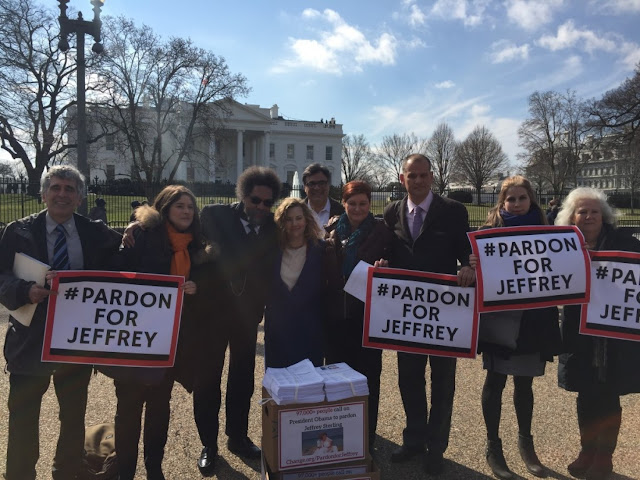 Holly Sterling, fourth from left, stands with supporters urging President Obama to pardon Jeffrey Sterling (Matt Zapotosky/ The Washington Post)
Prosecuting those who leak classified information has been a hallmark of the Obama administration, which has pursued more such cases than all its predecessors combined. Sterling said he believes his treatment was particularly harsh considering what happened to other more, prominent people. Gen. David H. Petraeus, for example, gave his mistress and biographer access to classified materials and was sentenced to only two years of probation and fined $100,000, Sterling said.
Even presidential candidate Hillary Clinton, whom political rivals have alleged mishandled classified information related to her use of a personal e-mail account while she was Secretary of State, seems to have benefited from her position, Sterling said.
“Again, a high ranking official who should know better, but completely given a pass, and almost an apologetic pass,” he said of Clinton. “So how should us regular citizens feel, especially with heightened concerns about national security?”
Prosecutors have long said Sterling’s case was different — and, in many ways, worse — than those to which he sought to compare himself. At the trial, prosecutors cast him as a vindictive ex-employee. They alleged he was upset over losses in his various legal squabbles with the CIA, and he leaked details about a classified operation to Risen to get back at the employer that fired him. The government said he effectively shut down an important and sensitive program designed to put faulty nuclear plans in the hands of Iranians and put the lives of those working with the CIA at risk.
Jurors agreed — convicting Sterling of all nine criminal counts. Several jurors declined to speak for this story, and others did not return messages.
Sterling, who did not take the stand in his own defense, denied he ever provided any classified information to Risen or served as a source for Risen’s 2006 book, “State of War,” or for any other reporter. He acknowledged that he knew Risen, who wrote a story about his discrimination lawsuit against the CIA, and said at one time, he even considered Risen a friend.
“He was the only person out there who listened and had any genuine interest in the discrimination I was facing at the CIA,” Sterling said. He said he does not harbor any anger toward Risen now — even though he contends that if Risen were to testify, that would effectively exonerate him. During previous legal proceedings, his lawyers took no position on whether Risen should be forced to testify.
“He wasn’t the one that fired me, he wasn’t the one that brought these charges, he wasn’t the one that did the search warrant at my home,” Sterling said. “I can’t answer for someone else. I can only answer for myself. I hold no ill will for him. He did not create the situation.”
For her part, Holly said she pressed for an explanation about why Risen could not simply vindicate her husband — even if he wouldn’t reveal the identities of his source or sources.
“I asked that specific question to our lawyers, ‘Why can’t he just get up there and say it wasn’t Jeffrey?’” Holly said. “I understand, and I feel that there’s a lot of mistrust in our government, and the citizens of our country need to know what’s going on, but I’m not okay that my husband is innocent and is sitting in prison right now.”
Sterling is appealing his case, while Holly pursues other avenues to secure his release.
“This is an outrageous miscarriage of justice,” Holly wrote in an open letter posted with the petition on Change.org and elsewhere. “My husband was wrongfully sentenced to prison simply because he was in touch with a journalist.”
She is also working to keep her husband’s spirits up, putting money in his prison commissary account so he can buy odds and ends like gym shoes or an MP3 player, and flying to Colorado once a month to see him. Their visits, she said, are necessary but wrenching. She spends all day Saturday and Sunday with Jeffrey, spending $40 at the vending machine so they can eat together. By the time she walks out, she said, she is usually crying.
Sterling said the sound of Holly’s crying is one of his most vivid memories from the day he was convicted. But without her now, he said, he does not know that he could persevere.
“She is such an incredible person and I know without her, I would never be able to endure any of this,” he wrote. “Truly, my fondest wish is just to get home to her.”