Democrats Are Emerging As Party of the Rich 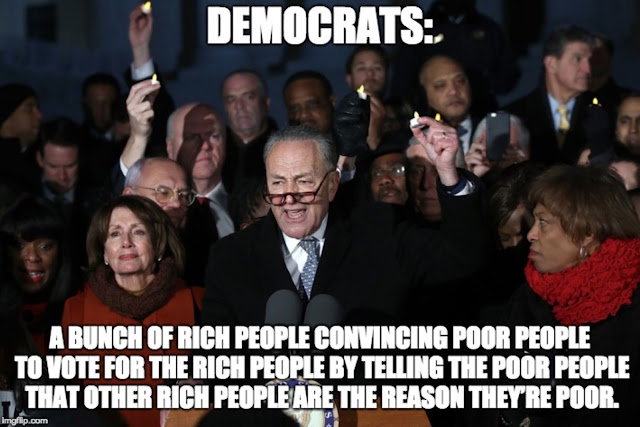 Maybe it’s time to rebrand the Democrats as the party of the rich.

This month saw the election of Jay Robert “J.B.” Pritzker as governor of Illinois. Mr. Pritzker, an heir to the Hyatt hotel fortune, is worth an estimated $3.2 billion, and spent $171.5 million to get himself elected, according to Money magazine.

Another winner was Edward M. “Ned” Lamont Jr., in the Connecticut governor’s race. Mr. Lamont, an heir to the J.P. Morgan banking fortune of his great-grandfather Thomas Lamont, estimated his assets in 2006 at between $90 million and $300 million, and showed reporters tax returns last month with income totaling $18 million over 5 years.

The winner of the election for governor of Colorado, Jared Polis, filed financial disclosure forms as a member of the House of Representatives indicating estimated wealth of more than $300 million.

Messrs. Pritzker, Lamont, and Polis are all Democrats.

The Democratic Party’s list of possible presidential contenders for 2020 includes Michael Bloomberg, whose fortune is estimated by Forbes at about $47 billion.

A declared presidential candidate is a Democratic congressman from Maryland, John Delaney, who is worth an estimated $90 million.

John Forbes Kerry might have another go at it, having recently acquired an $11.75 million, 18.75-acre property on Martha’s Vineyard to go with his $10 million house on Boston’s Louisburg Square.

The list of potential successors to Nancy Pelosi as speaker of the House includes a Democratic congressman from Massachusetts, Joseph Kennedy III, whose disclosed wealth of about $42 million stems primarily not from the Kennedy side of his family but rather from his mother Sheila Brewster Rauch’s status as an heir to the Standard Oil fortune.

When President Trump named an initial team that included Rex Tillerson, Wilbur Ross, and Betsy Devos, the press was quick to label it a cabinet of plutocrats. “Trump’s wealthy cabinet choices hark back to gilded age,” was the headline the Financial Times put over it.

Somehow, the wealth of Messrs. Pritzker, Lamont, and Polis has gotten less attention, perhaps because it doesn’t so easily fit the country-club Republican stereotype.

Instead of writing about the limousine liberals who are so rich they make the Trump cabinet look like a passel of paupers, the press has been obsessing about how a newly elected congresswoman from the Bronx, Alexandria Ocasio-Cortez, can’t afford to rent a place in Washington until she starts collecting her congressional salary.

The mention of Washington apartments is a reminder that there’s plenty of precedent for Democratic Party politicians who were personally at some economic distance from the working people they purported to champion.

Harry Reid, who was the Democratic leader in the Senate, resided in a Ritz-Carlton luxury condominium, prompting The New York Sun editorial headline, “Reid of the Ritz.” Neither Senator Edward Kennedy nor President Franklin Roosevelt were from what you’d call humble origins, though both were effective.

It may be too much to hope that Democratic politicians with some money will, John Kennedy-style, favor policies that will enable and encourage the creation of new fortunes, or even that they would be sensitive to the desire of other wealthy people not to have their money either taxed away at confiscatory rates or eroded by inflation.

I’d settle for an end to what seems like the constant vilification of “millionaires and billionaires.”

Or simply a recognition that, as a professor of political science at Williams College, Darrel Paul, put it after analyzing wealthy congressional districts, “the big story of the 2018 election is the swing of the rich toward the Democrats.”

It’s not clear whether that will be a long-term realignment.

Part of the dynamic is surely that even an incumbent President Trump is in some ways a change candidate, voicing popular discontent with policies advanced by coastal elites. Some of the wealthy understandably prefer to defend the status quo under which they have prospered.

Also, the campaign finance donation limits that liberals have championed in the name of getting money out of politics have had the paradoxical effect of favoring wealthy candidates who can self-fund.

Republicans may be tempted to attack the wealthy Democrats with class warfare rhetoric of their own.

Maybe it wouldn’t be a bad thing for the country, though, if wealthy voters do become a swing constituency to be courted by both political parties, rather than a group to be insulted, scapegoated, or taken for granted. If any of these politicians can articulate how their wealth was a reward for hard work and innovation rather than the result of mere luck, they’ll be enriching the conversation.

The sweet spot is for politicians to be rich enough that they understand and appreciate wealth creation, but not so rich that they are entirely remote from the reality of ordinary Americans. If Messrs. Pritzker, Lamont, Polis, Bloomberg, or Kennedy manage to achieve that Trump-like feat, one of them may eventually even follow him into the White House.