By Charles Hurt  | The Washington Times 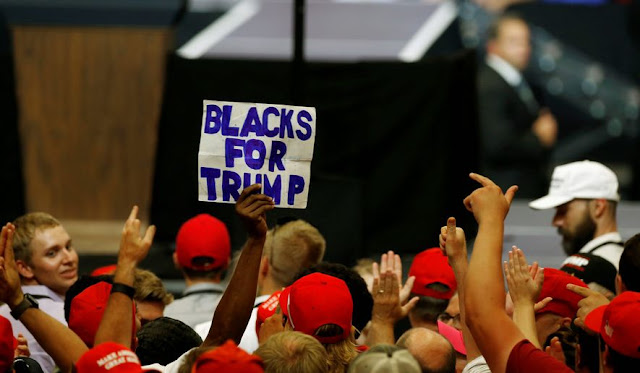 A man raises a sign “Blacks For Trump” as President Trump speaks
on June 27 in Fargo, North Dakota. (Associated Press)

Because President Trump is an Alt-Right, White-Supremacist, Nationalist Racist who wants to bring black slavery back in America, he dispatched a tweet proudly declaring record support among black voters.

“New Fox Poll shows a ‘40% Approval Rating by African Americans for President Trump, a record for Republicans.’ Thank you, a great honor!”

See, the thing you don’t understand about Alt-Right, White Supremacist, Nationalist Racists is that while their entire mission is to bring back black slavery, they also really want to be popular among black voters.

Of course the Great White Media immediately pounced on the proclamation and declared Mr. Trump’s tweet a lie.

“It’s 100% false,” declared another white person billing himself as a journalist. “Is Trump simply lying or is he so unhinged that he thinks its true?”

Actually, it turns out to be 100 percent true that such a poll was conducted — by Rasmussen. The results of that poll were reported by a columnist at FoxNews.com, which is where President Trump presumably learned of it.

I am sorry, but who is unhinged here?

This is what the Great White Media has morphed into in the age of Trump. They simply refuse to focus on the substance of anything.

They don’t want to talk about the economy, America’s disastrously broken immigration system or any of the other serious issues that got Donald Trump elected in the first place.

No, they just want to talk about Mr. Trump’s style. The tiniest misstatement gets turned into a mountain of Fake News. Oftentimes, there isn’t even a misstatement at the foot of that mountain. Just Fake News.

In this case, why did the Great White Media come so unglued?

Because they are absolutely terrified that the Rasmussen poll is actually correct. Or at least onto something. In fact, there are numerous surveys that indicate Mr. Trump’s popularity has improved significantly among black voters since he was elected.

In August, a professor named Michael Tesler wrote about black voters for The Washington Post in a column bizarrely called “Monkey Cage.” (I guess you are allowed to do this sort of thing if you call yourself a race expert.)

“Many critics have argued that Trump’s attacks on the intelligence of such prominent African Americans as LeBron James, Don Lemon, Maxine Waters, and Omarosa Manigault Newman were rooted in racism,” he wrote. “Manigault Newman has also made headlines for claiming that Trump is a racist who uses the n-word.”

Let’s set aside the stupidity of this claim. What matters more to black voters? Goofball accusations from un-serious people or the lowest black unemployment in history?

As an American voter, I can tell you what matters more to me. And I know I am not alone.

Mr. Trump’s policies are actually working to make life better for all Americans, including black voters. And Hispanic voters and Christians and Jews and Muslims and all the other categories Democrats like to divide Americans into.

If Mr. Trump can break down those false barriers and allow all voters to vote as Americans rather than the racial groups politicians put us all into then America will, indeed, be greater for it.