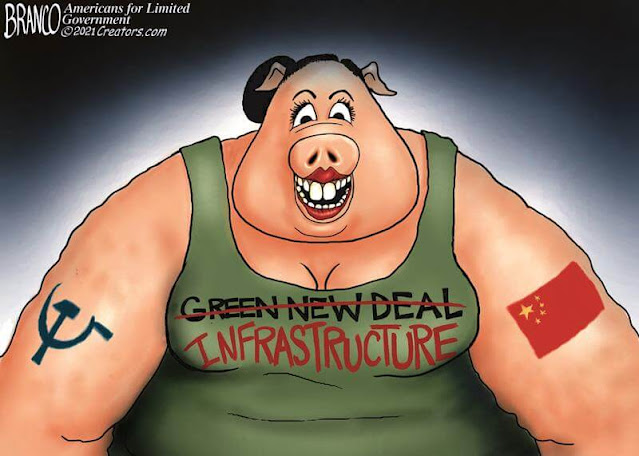 Presidentish Joe Biden’s multitrillion-dollar so-called infrastructure bill is supposed to be his signature achievement and a boon to Democrat lobby groups for years to come — so why can’t he budge Senator Joe Manchin (D-W.Va.) into voting for it?

Earlier this week I reported to you that Dems are desperate to get this bill passed, so much so that they were willing to back down a bit on their treasured tax hikes — because of Manchin’s opposition.

On Wednesday, Biden brought Manchin to the Oval Office for a little presidential arm-twisting.

According to Axios, the meeting did not go well… for Biden.

Defying a president from his own party — face-to-face — is the strongest indication yet Manchin is serious about cutting specific programs and limiting the price tag of any potential bill to $1.5 trillion.

I’d be remiss if I didn’t mention that Axios noted that “Biden’s analysis did little to persuade Manchin.” Rather, I should mention how much that line made me laugh.

Biden doesn’t provide analysis and never has — even when he enjoyed, as it were, full use of his faculties. Biden shouts, hectors, bullies, and demagogues.

Biden met separately with that other holdout, Senator Kyrsten Sinema (D-Ariz.), who called the meeting “productive” but who might prove even harder to budge than Manchin.

Mike DeBonis reported in Thursday’s Washington Post that “some Democrats quietly fear her objections could be even more nettlesome.”

Her voting record also provides warnings. Notably, with Democrats eyeing $2 trillion or more in tax increases to offset their spending plans, Sinema has publicly allied with Republicans on several tax bills. As a House member, she was one of seven Democrats to support a GOP bill eliminating the federal estate tax in 2015 and was one of only three Democrats who, in 2018, voted to permanently extend individual tax cuts passed by Republicans the year prior.

Democrats can’t afford a single defection, even to pass this tax and spending bomb through reconciliation. So far, there are two holdout and it’s going to be very difficult to bribe them when their primary objection is the size of the thing.

For Biden, this is an embarrassing place to be, assuming he’s cognizant enough to feel embarrassment. His “give everything to everybody forever” mock-infrastructure bill is the biggest single welfare state giveaway in history, and would propel him up past LBJ and near FDR in the Democratic pantheon.

And as I reported for our VIPs back in May, that’s the explicit goal of the power behind Biden’s throne, White House Chief of Staff “President” Ron Klain.

Biden generates no fear among party moderates (if that’s the word) like Manchin and Sinema, and if he fails with this $3.5 trillion monster, he’ll lose whatever love he still has with his party’s power-mad progressives.