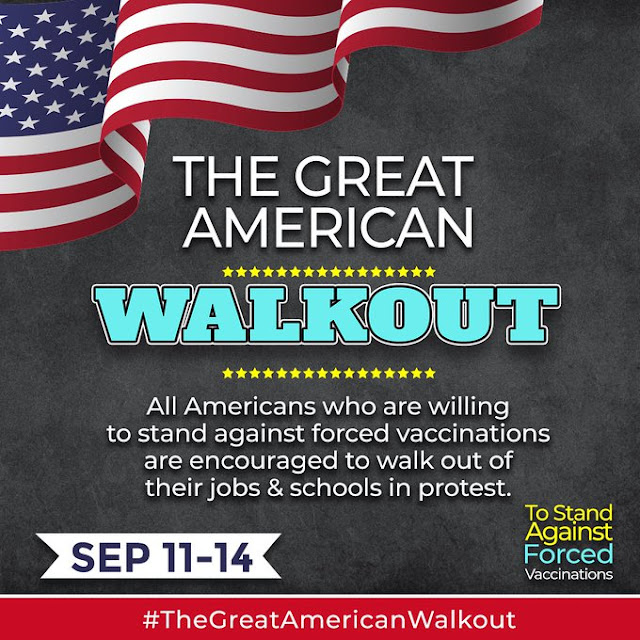 A call has been issued for Americans to take a stand against vaccine mandates by walking out of their jobs or schools.

On Thursday, President Joe Biden said he would draft executive orders forcing all employers with more than 100 workers to institute vaccine mandates, as well as imposing them on federal workers and federal contractors.

According to a news advisory provided to The Western Journal, “The Great American Walkout” kicked off Saturday with a San Diego news conference “to announce the launch of a nationwide peaceful protest of Police Officers, Fire Fighters, Medics, Educators and Parents who are all greatly concerned with President Biden and multiple other state Governor’s recent calls for nationwide COVID-19 vaccine mandates.”

The advisory noted the mandates “will affect 100 million Americans including all federal workers and contractors, accompanied by a requirement that large companies must impose vaccines or regular invasive testing for employees.”

A news release also provided to The Western Journal said the four-day protest of vaccine mandates from Saturday through Tuesday is being led by Rachel Hamm, a conservative candidate for California Secretary of State in 2022, political strategist Jason Sullivan and a Riverside County businessman identified only as “Cameron R.”

The news release said that on Saturday, “Americans who are attending work, or school are asked to peacefully leave what they are doing and to immediately flood social media with their own powerful messages in defiance of forced vaccinations.”

The effort is also calling for social media postings using the hashtag: #TheGreatAmericanWalkout.

“We also encourage you to email your boss or school officials and let them know WHY you are protesting,” the release said.

The release noted that Democratic Gov. Gavin Newsom has “failed miserably as the Chief Executive Officer of the 5th Largest Economy on Earth, and now he’s also saying that you have to be vaccinated in order to provide for your families.”

“Californians need him to leave office for their lives to thrive once again. In addition to participating in this walkout, remember to vote YES to recalling Newsom on September 14th!” the release said.

“First, we were told we were shutting things for a couple weeks,” Hamm said.

“Then, it was wear this mask, now wear two masks, don’t attend your church, your business must stay closed, and your kids can’t go to school. On top of that, Newsom’s and Biden’s administration have intentionally left our border wide open for COVID-positive invaders to flood into our country, while imposing extreme restrictions on our own citizens.”

Hamm said citizens “are facing the most dangerous of Newsom’s and Biden’s dictatorial mandates; Get this shot, or you can’t keep your job. As an educator in California my husband has been told by Gavin Newsom, ‘Take this vaccine or lose your ability to provide food for your family.'”

“We’re not anti-vaxxers in general, but we do believe everyone should have the right to choose what’s best for themselves when it comes to the COVID shot. There are serious concerns about its safety and efficacy, regardless of what politicians say,” she said.

“One thing we know about career politicians is that they lie! I’d encourage all Americans to consider why a shot is being pushed this hard for a virus that has a 99% recovery rate. We’ve had enough, and now we will make our voices heard loud and clear by this peaceful protest,” Hamm added.

Sullivan said, “We the people are in charge of our country, not the politicians. We live in a constitutional republic, not a tyrannical oligarchy led by an out of control, mentally unstable train wreck President, Joe Biden.”

On her Facebook page, Hamm said employers who are not on the Biden bandwagon should not be targeted.

“If your employer is NOT requiring you to get vaccinated, don’t walkout! Do a great job for them and thank them for supporting freedom,” she wrote. 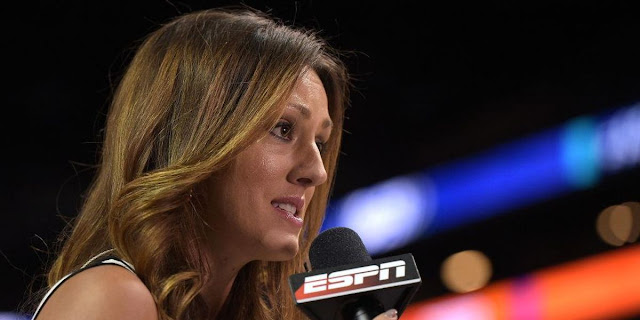 Veteran ESPN reporter Allison Williams said she won't be on the sidelines to cover college football this season because she refuses to get the COVID-19 vaccine.

"This will be the first fall in the last 15 years I won't be on the sidelines for College Football," Williams tweeted Thursday.

Williams revealed that the reason she is hesitant to get the COVID-19 vaccine is because she is attempting to have a second child.

"While my work is incredibly important to me, the most important role I have is as a mother," she wrote on Twitter. "Throughout our family planning with our doctor, as well as a fertility specialist, I have decided not to receive the COVID-19 vaccine at this time while my husband and I try for a second child."

"This was a deeply difficult decision to make and it's not something I take lightly," Williams continued. "I understand vaccines have been essential in the effort to end this pandemic; however, taking the vaccine at this time is not in my best interest."

"After a lot of prayer and deliberation, I have decided I must put my family and personal health first," she added.

"I will miss being on the sidelines and am thankful for the support of my ESPN family," Williams concluded. "I look forward to when I can return to the games and job that I love."

Williams, who joined ESPN in 2011, said that the decision to walk away from her reporting job made her heart hurt, but she is "at peace" with her decision to go against the company's vaccine mandate.

ESPN said it would not "comment on an individual," but released a statement that read, "We are going through a thorough review of accommodation requests on a case by case basis, and are granting accommodations where warranted. Our focus is on a safe work environment for everyone."

The Walt Disney Company, which co-owns ESPN, announced in late July that it would require all salaried and non-union employees to get the COVID-19 vaccine within 60 days.

At The Walt Disney Company, the safety and well-being of our employees during the pandemic has been and continues to be a top priority. Toward that end, and based on the latest recommendations of scientists, health officials and our own medical professionals that the COVID-19 vaccine provides the best protection against severe infection, we are requiring that all salaried and non-union hourly employees in the U.S. working at any of our sites be fully vaccinated.

The company added, "Vaccines are the best tool we all have to help control this global pandemic and protect our employees."

The Centers for Disease Control and Prevention recommends the COVID-19 vaccination for "people who are pregnant, breastfeeding, trying to get pregnant now, or might become pregnant in the future."

However, some women have reported experiencing irregular or missing menstrual periods, including bleeding that is heavier than usual, after receiving COVID-19 vaccines.

On Aug. 30, the National Institutes of Health announced it had paid $1.67 million to researchers from five institutions to study potential links between COVID-19 vaccinations and menstruation.

"Combined, the five NIH-funded studies – conducted by researchers at Boston University, Harvard Medical School, Johns Hopkins University, Michigan State University and Oregon Health and Science University – will likely incorporate between 400,000 and 500,000 participants, including adolescents and transgender and nonbinary people, according to Diana Bianchi, director of the agency's Institute of Child Health and Human Development, which is funding the research along with NIH's Office of Research on Women's Health," the Seattle Times reported.