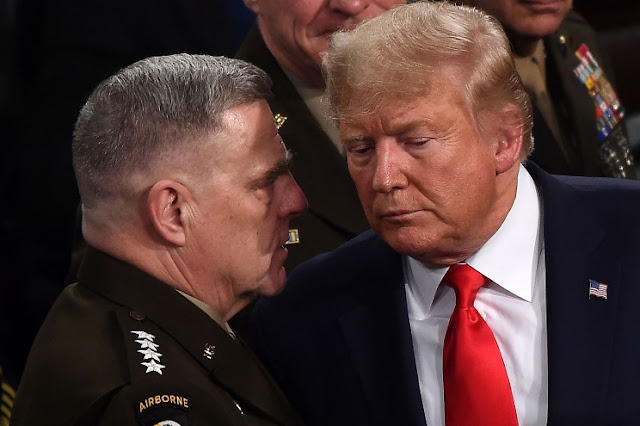 Gen. Mark Milley's admitted actions at the end of President Donald Trump's term were the equivalent of a military coup. - Photo by OLIVIER DOULIERY/AFP via Getty Images

In the continuing war for the truth, the good guys went to battle with a lone pea shooter against miscreants that have a military. To be precise, it is the military of the United States of America.

Its leader is the latest to have been exposed trying to delegitimize Donald Trump’s presidency.

First, it was the FBI, the CIA, the media, academia and others who crossed the line into political activism, and now we have clear evidence that the top man in the Pentagon also succumbed to the siren song of power. It turns out that the nation’s most admired public institution is led by some people with very dirty hands.

The reprehensible actions of Gen. Mark Milley, chairman of the Joint Chiefs of Staff, take the cake for audacity and arrogance.

Milley admitted that, late in Trump’s term, he made the calls reported in a forthcoming book, which included a promise to his Chinese counterpart that he would alert China to any planned attack by America. His argument that the calls were “routine” and done to “reassure both allies and adversaries in this case in order to ensure strategic stability” underscores his serious misconduct.

Those decisions and actions are above his pay grade, but Milley never told his superiors what he was doing. But he did reportedly tell his top staff that only he could give final approval for a nuclear strike. A separate report says he warned aides of trouble from Trump supporters, declaring that “we’re the guys with the guns.”

Notably, not a single military officer blew the whistle.

In plain English, this was an attempted coup. Milley, in a fit of pique over the president’s conduct after the election, reversed the chain of command. No longer would a duly elected civilian be on top.

A general trusted with awesome responsibility went rogue, usurping the president’s power and making himself commander in chief.

Milley’s actions are the latest manifestation of a sickness that led the leaders of many important institutions to turn their hatred for Trump into a license to break restraints, standards and even laws.

The first aim was to block him from being president and then sabotage his administration with anonymous leaks of classified information and false charges. Milley went the logical next step in trying to seize the power to declare war.

The pattern is unlike anything seen in modern times and perhaps ever in American history.

That was the view of William Barr, Trump’s second attorney general, who launched a Department of Justice probe into the spying against Trump during the 2016 campaign and the subsequent undermining of his White House.

That probe is headed by John Durham, whom Barr named a special counsel, meaning he would outlive the administration. That has happened, though the results so far are puny given the scope of the scandal and the number of top officials implicated.

In more than two years, Durham has filed charges against just two people. Both have been important, but no clear legal connection has been established to the larger plot, especially the effort to use the secretive FISA court and other agencies to tip the election to Hillary Clinton.

Last week illustrated the enormous mismatch between Durham’s plodding probe and the unchecked willfulness of the other side, as exemplified by Milley.

The special counsel charged Democratic-connected lawyer Michael Sussmann of lying to the FBI when he tried to steer the agency toward what he claimed was cyber-evidence of ties between a Russian bank and the Trump campaign. Asked who his client was, Sussmann allegedly said he didn’t have one, when in fact his law firm, Perkins Coie, was working for Clinton’s campaign and the Democratic National Committee.

Sussmann’s “tip” soon became news among pliant media eager to help Clinton, and she herself touted the supposed connection to the Russian bank. In the end, there was no there there, but the hit on Trump was typical of 2016.

The fraudulent Michael Steele dossier also was funded by Clinton through Perkins Coie and given to the FBI to try to make a Russian-collusion angle stick. It was and still is the dirtiest dirty trick in modern politics.

Similarly, the charge against Sussmann shows he was floating another Russian angle to the FBI. There was zero truth in either case.

Sussmann denies the charge, but the indictment says he billed the Clinton campaign for his repeated efforts to promote the Russian bank scam, so a trial would be informative.

Earlier, Durham had charged former FBI lawyer Kevin Clinesmith, who pleaded guilty to lying on a surveillance-warrant application during the bid to spy on Carter Page, a Trump associate. Clinesmith’s punishment was just one year of probation.

While the media mostly relegates Durham’s cases to sideshows, Milley is being treated as a hero by many on the left. Predictably, Joe Biden expressed confidence in him despite his dance with treason.

And why not? Milley’s defenders, including Biden, were all for blocking Trump or driving him from office, by hook or crook. Recall that Biden took part in an infamous White House meeting in January of 2017 where the FBI spying probe was discussed.

The taint was so obvious that Susan Rice wrote a notorious memo two weeks later, on the day Trump was inaugurated, claiming Barack Obama had insisted the probe of Trump be done “by the book.”

If that were true, the last-minute memo to the file wouldn’t have been needed.

As we have known for some time, the plot to paint Trump as a Russian agent began when it appeared he was a good bet to get the GOP nomination. It involved the White House, major elements of the Department of Justice and intelligence agencies in a coordinated effort with Clinton’s campaign.

It’s not quite true that all those involved got away with it. FBI Director James Comey was fired by Trump, and his crew of dirty cops, including Andrew McCabe, Lisa Page and Peter Strzok, was forced out in disgrace.

Yet not a single one of the scores of people unmasked in the corrupt effort received a punishment commensurate with their abuse of power and the weaponizing of federal agencies for partisan purposes. In fact, some were actually rewarded, with the odious Comey getting a fat book deal and teaching gigs at prestigious colleges.

No doubt that record has Milley savoring his prospects. It certainly won’t hurt that he previously aligned himself with the far left by supporting the teaching of critical race theory at West Point, telling Congress: “I want to understand white rage. And I’m white.”

As for the unending disaster in Afghanistan, including the drone strike that killed 10 innocent civilians, including seven children, Milley hasn’t had much to say.

That won’t hurt him. By resisting Trump and giving credence to anti-white racism, he’s already checked the required progressive boxes.

And isn’t that what matters most?