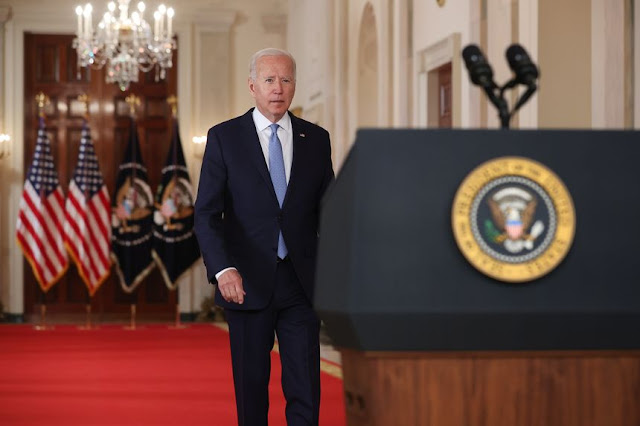 President Joe Biden walks into the State Dining Room before delivering remarks on the end of the war in Afghanistan at the White House on Aug. 31. - PHOTO: CHIP SOMODEVILLA/GETTY IMAGES

Biden spins a tragedy for U.S. interests into an antiwar victory.

American Presidents must make hard decisions, and we’re inclined to support them when they do so overseas in the national interest. But President Biden’s defiant, accusatory defense on Tuesday of his Afghanistan withdrawal and its execution was so dishonest, and so lacking in self-reflection or accountability, that it was unworthy of the sacrifices Americans have made in that conflict.

The charitable interpretation is that this is what Mr. Biden really believes about Afghanistan in particular, war in general, and how to defend the U.S. The uncharitable view is that he and his advisers have decided that the only way out of this debacle is to lie about it, blame everyone else, and claim that defeat is really a victory. Neither one is reassuring about Mr. Biden’s character, his judgment, or—most ominously—the long three-and-a-half years left in his Presidency.

Start with the dishonesty, although we only have space to cover some of the falsehoods. Mr. Biden again claimed he was hamstrung by Donald Trump’s bad deal with the Taliban.

Mr. Trump’s deal was rotten, but as a new President he could have altered it as he has so much else that Mr. Trump did. The Trump deal was based on the Taliban fulfilling conditions—such as negotiating a deal with the Afghan government—that they had already broken when Mr. Biden became President. Yet Mr. Biden claims he was both a prisoner of that deal and courageous for fulfilling it.

He also repeated that his only choices were total withdrawal or “escalation” with thousands of troops. His own advisers offered him alternatives in between, as did the Afghanistan Study Group. He was so bent on withdrawal, and so quickly, that he refused to adjust the military plan even as the Taliban made gains and the CIA warned that the Afghan government was likely to fall.

Mr. Biden described the evacuation as if it were a triumph, and that his Administration had planned for such a contingency in case the Afghan military collapsed. This is, literally, unbelievable. Multiple media reports have revealed that the White House was caught by surprise and preparing for vacation en masse when Kabul fell. The military had to scramble and stage a heroic effort to evacuate those who were able to get to the airport. Mr. Biden wants to take credit for putting out the fire he started.

The President even had the ill grace to blame Americans for not leaving Afghanistan sooner, and Afghans for not fighting. But his own government clearly felt no urgency, as the U.S. Embassy had to frantically destroy documents in the final hours. As for the Afghans, he demeans the sacrifice of the 66,000 who died fighting the Taliban, often next to Americans. They collapsed when they lost air support as the U.S. contractors left and after the military abandoned Bagram Air Base in the dead of night.

Most dishonest—and dangerous—was the President’s assertion that “the war in Afghanistan is now over.” No one in the jihadist movement believes that. The Taliban have won a major victory in the long war that Islamic radicals are waging against the U.S. They have secured Afghanistan for what is likely again to become a refuge for recruits for al Qaeda, ISIS-K and the Haqqani network.

Mr. Biden wants Americans to believe that the U.S. can counter this from “over the horizon,” by which he means drones and satellites. But now the U.S. has no military in the country, and no CIA listening post in Khost. It has no friendly government or allies to locate and gather intelligence on terror camps. The U.S. has all of those assets to counter terrorists in Yemen, Somalia, Iraq and Syria. Every expert we know says Mr. Biden’s claims of easy over-the-horizon capability are a fantasy.

The President finished his remarks with a discourse on the horrors of war, which no one denies. But in laying out the costs, and the human tragedies, he also sends a signal to the world about his own resolve. He is telling rogues and autocrats that he lacks the will to send American soldiers into harm’s way. He will conduct his counterterror war only from a distance, with unmanned drones.

Those are useful and can save American lives. But they are no substitute for soldiers on the ground who can capture or kill the likes of bin Laden, or rescue Americans held hostage. The hard men in Beijing, Moscow, Tehran and the terror dens of Helmand will test Mr. Biden’s war-weariness.

Mr. Biden’s unapologetic speech also signals that the White House intends to close the books on Afghanistan and pivot to domestic affairs. No one will lose their jobs. They’ll all talk from the same script. Mr. Biden may never speak of it again. All the more reason for Congress and the press to explore the many bad decisions that led to this American security debacle.