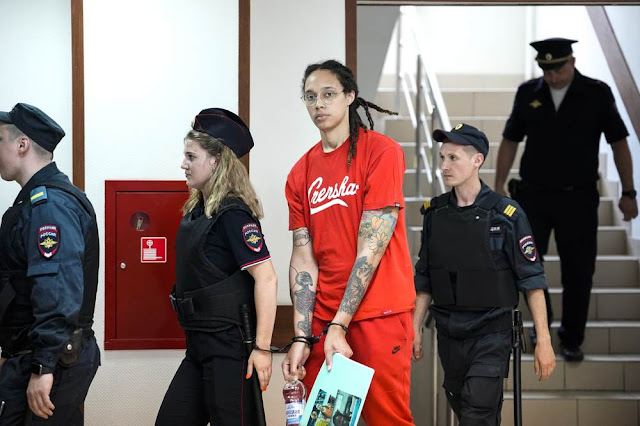 In remarks before 9:00 a.m. on Thursday, President Joe Biden announced that his administration had negotiated a prisoner swap to free WNBA player Brittney Griner from a Russian penal colony in exchange for Russian arms dealer Viktor Bout who is also known as the "Merchant of Death."

Bout was roughly 11 years into a 25 year U.S. prison sentence for his actions that included a conspiracy to kill Americans, provide material support to terrorists, and traffic anti-aircraft missiles. But now he's free in the one-for-one prisoner exchange between the U.S. and Russia that apparently secured the safe return of Griner who was arrested, charged, and convicted in Russia for drug smuggling and possession after she brought vape cartridges containing cannabis oil into the country. Griner was given the maximum 9-year sentence by a Russian court.

Emphasizing that it was a "good morning," President Biden described the "intolerable circumstances" Griner was being held under in Russia. Saying the "last few months have been hell" for the WNBA player, Biden said Griner represents "the best about America."

Notably, the Biden administration's prisoner swap did not include the release of former U.S. Marine Paul Whelan, who was arrested in Russia in 2018 and charged with espionage before receiving a 16-year sentence in 2020. Apparently the Biden administration decided freeing the "Merchant of Death" was worthwhile to free a WNBA player, but not a U.S. veteran — a fact that some, including Rep. Michael Waltz (R-FL), pointed out as the news broke.

In his remarks Thursday morning, Biden did at least mention Whelan, saying he had not been forgotten and claiming the swap to bring Griner home was not a choice of who to bring home in exchange for the release of the "Merchant of Death." Biden claimed that Russia is treating Whelan's case differently and pledged that he would "not give up" on bringing Whelan home and that his administration would "keep negotiating in good faith" for his release.

Still, the trade for Griner is lopsided at best. Is the Biden administration just looking for a public relations win they think they can get for bringing home someone with name recognition? Whatever their reasoning, the Biden administration's victory lap on Thursday leaves a former U.S. service member behind in a Russian gulag.

When a reporter shouted questions about Whelan and his family, Biden only said that he "was talking" to Whelan's family and ignored a question asking when his release would be secured so he too could come home.