GOP Senator on Omnibus Bill: We Got Rolled by the Democrats 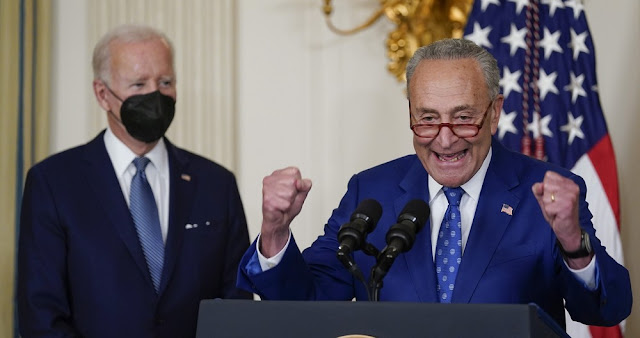 It’s absolute garbage legislation, and the Republican Party gave their seal of approval yesterday. For all the tough talk about wasteful spending, the GOP surrender yesterday was a painful throwback to an old axiom about the two parties: the Democrats want to drive off the fiscal cliff at 80 MPH, while the GOP would prefer to go 45MPH. I believe the Koch Brothers are credited with that saying, but even still—it’s appropriate after this atrocious $1.7 trillion omnibus was passed on a 68-29 vote.

The only good thing about this bill—and I’m using that phrase lightly—is that it didn’t include the equally appalling mass amnesty bill that Sens. Thom Tillis (R-NC) and Kyrsten Sinema (I-AZ) tried to push through. But it does involve billions in aid for Ukraine, which isn’t a Republican priority, and billions more for the Internal Revenue Service so they can harass working Americans’ Venmo transactions. There were no conservative priorities in this bill—none.

Spencer had written extensively about this legislation and included Rep. Chip Roy (R-TX) torching the “swamp GOP” in the upper chamber for selling us down the river. The 4,000-page-plus legislation was viewed as a win by Sen. Mitch McConnell (R-KY), who described it as a bill that accomplished conservative aims and was a bright spot in governance as the GOP could get their items included by working with a Democratic Congress. While Roy’s remarks were appropriate, Sen. Mike Braun (R-IN) agreed, saying Republicans got “rolled” with this spending bill, and that anyone not concerned about these back-breaking deficits “is blind to the reality of why that’s not going to work in the long run.”

The Indiana Republican is running for governor in 2024, and these days only reinforce that he made the right decision to leave this town.

“We get rolled by the other side of the aisle because they are unapologetic about turning the federal government into their growth business, and we as conservatives complain about it but then go along with it,” he said.

“We can’t just accept this as business-as-usual,” added Braun.

Sen. Mike Lee (R-UT) did try to torpedo the bill, or at least include something conservative within its pages, by adding an amendment that would extend Title 42, which permits our immigration enforcement agents to turn away migrants when caught illegally crossing the border. That was set to expire within the coming days, but as soon as Democrats got wind of this scheme—they killed it.