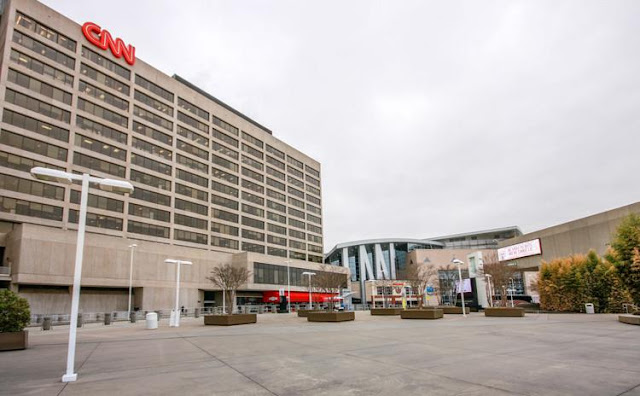 The CNN Center in Atlanta, Georgia, is the world headquarters of CNN. - Shutterstock photo

The important thing is there are plenty of newspapers, with plenty of different people controlling them, so there are a variety of viewpoints, so there is a choice for the public." – Rupert Murdoch

Soldiers of the Press was a radio series that ran from 1942 to 1945 to showcase the contributions that United Press reporters made during the World War II. These shows featured war correspondents in every venue of action throughout the war. These real life dramas were encapsulations of their eye witness accounts from behind the enemy lines in Japan, New Guinea, China, Germany and Italy.

Each of these war correspondents deserves a place in history for their dedication, bravery and their willingness to "tell it like it was on the front line." These tough reporters are portrayed as the people they were. War correspondents knew the risks of their assignment, and over 60 journalists died in the line of duty alongside the fighting men and women whose stories they were reporting upon.

Ernie Pyle was the most famous American journalist covering World War II. He reported from the front line dodging bullets to get true-to-life stories. On April 18, 1945, Pyle was killed on Ie Shima by a sniper. He was buried in the National Punchbowl Cemetery in Hawaii with his fellow war heroes.

When the International Federation of Journalists published its first annual report of journalists killed in 1990, very few anticipated that the journalists killed list would still be going and growing 30 years later. These numbers are reminiscent of what Ernie Pyle said, “You are never safe in a war zone.”

"Freelance journalists are the most vulnerable since they work alone without help." – Åsne Seierstad

According to The Committee to Protect Journalists (CPJ), 67 journalists were killed in 2022. That is a 30% increase over last year. Russia’s war in Ukraine, chaos in Haiti, violent crime in Mexico and response to civil protests has contributed to a sharp spike in fatalities of journalists killed this year.

The International Federation of Journalists (IFJ) tallied 385 journalists currently imprisoned for their work, with the highest figures in China, Hong Kong, Myanmar, Turkey and Iran. That's an increase of 30 journalists over last year. Many will remain there for years for simply trying to report the news.

With the number of media worker killings on the rise, the IFJ called on governments to do more to protect journalists. Failure to act emboldens those who suppress information and undermines the people's ability to hold leaders accountable.

"Without better protection for journalists, it limits the ability of people from keeping their leaders from abusing their political power." – Anthony Bellanger

Knut Dörmann, from the IFJ Legal Division, said current Geneva Convention regulations regarding the rights of journalists in conflict zones, are not being enforced. He said attacks against reporters in conflict situations are international war crimes but governments are ignoring international law.

"No matter how many rules you agree upon, they aren’t enforced during a war." – Suzy Kassem

CPJ compiled a list of the countries that are most unsafe for journalists. They are Eritrea, North Korea, Saudi Arabia, Ethiopia, Azerbaijan, Vietnam, Iran, China and Myanmar. Seven of these countries are also the worst jailers led by China and Myanmar with 105 journalists in jail according to CPJ’s annual census. Most journalists imprisoned globally are charged with anti-state crimes. The safety of journalists is an essential condition for the realization of the universal, inalienable right to freedom of expression, as stipulated in the Universal Declaration of Human Rights. But human rights and democracy are only guaranteed if journalists can work freely and without fear of political persecution, violence, intimidation, government surveillance and the threat of censorship.

Democracy is under threat around the world. They are confronting challenges within and outside of their borders. Public distrust and the failure of governments to work for the people ignites political polarization, which allows leaders to undermine the duties of the press. Politicians and media use selective censorship to empower one party over another, which destroys the tenants of democracy.

In America, animosity toward journalists continues to grow as more instances of censorship have been revealed about liberal media "killing stories" for Democrats during elections. This tarnishes the opinions people have with media and it severely reduces our credibility with other nations also.

The world has always turned to America to help protect their freedom and democracy. American journalists set the bar for the reporting of factual events during WWII. But a lot has changed since then. The ranking of the media on The World Press Freedom Index shows a big decline in freedom of speech in many democracies worldwide. This includes the U.S., which slipped down to number 45.

European nations dominate the WPF rankings with the most press freedom. Norway ranked No. 1 and Sweden finished No. 2. The Netherlands, Finland and Switzerland rounded out the top five. Canada rose four positions to No. 18 and was classified as having a "good" press freedom climate.

Unlike China, North Korea, Saudi Arabia, Vietnam, Iran, Myanmar and other nations where media reporters are censored by the government and journalists literally fear for their lives, journalists in the U.S. have unlimited freedom of the press, without the fear of reprisal. But you'd never know it.

Everyone already knew that social media, TV and the fishwrap censored conservatives during the last election. Public schools and universities are adamantly censoring free speech to support the pro progressive platform throughout America. This is fostering the aggrandizement of socialism also.

FDR told us, "We have nothing to fear but fear itself." Many reporters across the traditional news media are struggling against institutional tics and timidities that make "balance" a false idol. Most journalists are liberal on social issues, like abortion and gun control and even evolution. And most work for corporations run by young liberal university grads who were taught that Republicans are weird, scary and a threat to them. Therefore, reporters are as liberal as the men who own them."

At one time when journalism was a passion not a profession, the U.S. was admired and looked up to as a nation to emulate for their courageous efforts to speak up and support admirable principles with actions to protect global free speech and democracy. But today, America has lowered the bar for protecting free speech to facilitate progressive idealism, which is affecting free speech globally.

Today, most U.S. journalists will never appreciate freedom of the press until they lose it. If you ask most any reporter who Ernie Pyle was, and what he did for freedom and democracy, most will say he was a goofy guy on the Andy Griffith Show who owned a gas station and also joined the army.

"I won't say that newspapers misquote me, but I sometimes wonder where Christianity would be today if some of those reporters had been Matthew, Mark, Luke and John." – Barry Goldwater