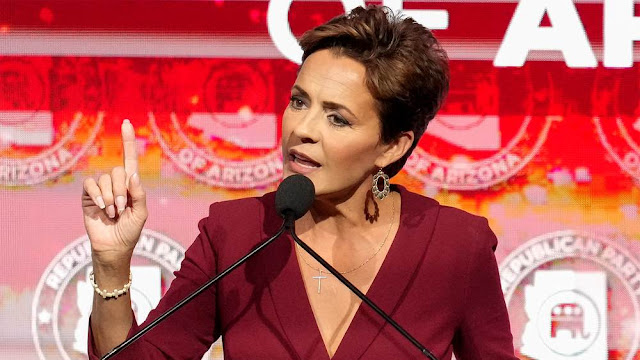 The trial court judge in Kari Lake’s election lawsuit predictably threw out her case on Saturday, putting on a sham trial that on the surface looked fair to the general public that doesn't know any better, but to legal minds was a travesty of justice. Maricopa County Superior Court Judge Peter Thompson only gave her two days for a trial and issued his ruling immediately afterwards, even though he could have taken several days, and it was one of the biggest, most important cases in the country. Legal experts believe his decision was ghostwritten, they suspect top left-wing attorneys like Marc Elias emailed him what to say.

The standard should have been whether voters were disenfranchised, not all the additional hoops Thompson added. If inner city blacks had been disenfranchised, Thompson would not have added all those extra requirements, he would have made the law fit. Robert Gouveia, a rare attorney who isn’t afraid to speak up and who describes himself as watching prosecutors, judges and politicians, said the standard should have been whether there was voter suppression.

Instead, Thompson said Lake had to show an extremely vague, high bar in order to prevail, that an election official intentionally caused the printer changes in order to change the results of the election, and that it did affect the outcome. He explained away many of the disturbing election anomalies as accidents or mere coincidences. He ignored the vast majority of them; in a show of arrogance, his opinion was less than eight pages long.

Thompson completely ignored all the voters who saw the long lines and gave up trying to vote, as if they didn’t count. Considering probably well over half of the voting locations in Maricopa County were affected, not to mention they were almost all in heavily Republican areas, this was no small disenfranchisement. Many voters have come forward and told how they were unable to vote for this reason or similar, such as a man who couldn’t find parking in time due to the overcrowded parking lot.

Even with the higher burden required by Thompson, well-known lawyer Viva Frei, whose real name is David Freheit, said Lake’s team showed there was intentionality and believed the case was a slam dunk.

It was clear early on Thompson was going to rule against Lake, throwing out eight of her 10 claims, which included observers’ testimony that 90% of mismatched signatures were accepted. In doing so, he trivialized important, good-faith arguments about constitutional and civil rights. The two whittled-down claims he kept allowed him to hold a trial to appear fair, then declare everything OK and the county in the right. Now the Arizona Supreme Court will be set up to uphold it all because these are fact-specific matters and they must defer to the fact-finding discretion of the Superior Court.

Thompson said in his opinion that it was unprecedented in history to set aside an election like that, but he was mincing words. It’s happened many times. In 2013, in Pembroke, North Carolina, a new election was ordered for town council after it came out that at least two candidates helped bring people to the town's early voting location who were ineligible to vote. In 2018, in Sharpsburg, North Carolina, a judge merely cited “an irregularity” as enough to order a new election. There, only 20-25 voters were alleged to have been disenfranchised.

In 2019, a judge ordered a new election for a Georgia House seat based on merely finding that four voters were ineligible. Also that year, in North Carolina, Democrats were all too happy to praise a judge ordering a new election where a contractor was accused of illegally collecting hundreds of ballots for the winning Republican candidate. He wasn’t even convicted yet, merely accused.

In Berlin, Germany this year, the court ordered a new election for the exact same reason Lake requested one, long lines due to logistical issues. There was no requirement of intent or showing that the problems affected the outcome.

The left and its comrades in the MSM pretend that these cases don’t exist, and they pretend that there’s never been any evidence produced in the election lawsuits, when the reality is it’s a staggering amount, especially the witness testimony — one witness’s statements alone has been enough to send people to the death penalty.

Compounding the problem, hardly any attorneys dare speak up about this, since they risk being targeted and disbarred. So they’re not writing about it or going on talk shows, and the best of the bunch have already been targeted so they’ve either already been disbarred or have to lie low. Nor are they taking on representation, leaving candidates like Lake to rely upon non-election attorneys. When the Cochise County Supervisors gutsily called for a hand count, they could find no attorney who dared represent them.

A friend described the situation, “We don't have a justice system and voting is becoming pointless. Only Democrat votes matter in our country now.” Voter fraud experts believe the Democrats started targeting states years ago, like Washington and California, then moved on to Colorado. Arizona, Georgia and Pennsylvania are their latest targets. They intend to move on to states like Florida next if not stopped. Voter disenfranchisement has become the most important issue facing Republicans today, and if not stopped, we will become a one-party nation.

The War Against We the People 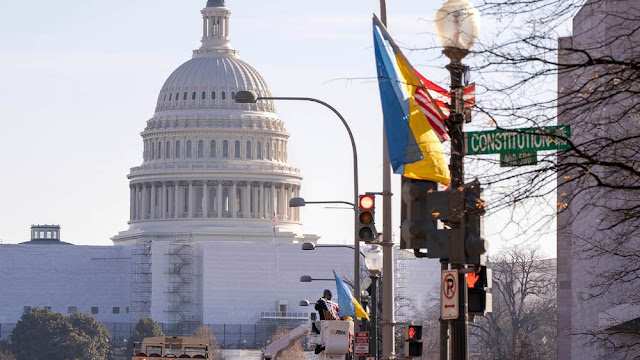 In the preamble of the U.S. Constitution, our Founding Fathers declared that the brilliant centerpiece of our government was created by “We the People of the United States.” It was clearly not, “We the Politicians” or “We the Bureaucrats.”

Unfortunately, our federal government has utterly abandoned “We the People.” It was never more apparent than in the disgusting spectacle of the recently passed $1.7 trillion monstrosity known as the omnibus spending bill.

While the bill allocates $800 billion in non-defense spending, there is inadequate funding for the recruitment of more border patrol agents. Despite an historic invasion of migrants pouring across our southern border, Immigration and Customs Enforcement (ICE) received no spending increase “to account for inflation” in the bill. It also placed restrictions on ICE in their working relationship with local and state law enforcement agencies.

As our politicians showed disdain for our border security, the legislation provides $410 million for the border security of Jordan, Lebanon, Egypt, Tunisia and Oman. Once again, the needs of citizens in other countries were placed ahead of the protection of the American people.

The bill handsomely funded a plethora of progressive pipe dreams. For example, it included $12.3 billion for the Internal Revenue Service (IRS), which just received $80 billion in the Inflation Reduction Act. It also provided $10.14 billion for the Environment Protection Agency (EPA), $2 billion for “climate and environmental programs,” and $3.4 billion for “renewable energy programs.”

The legislation named a new federal building for outgoing House Speaker Nancy Pelosi (D-CA),  and provided $3.6 million for a “Michelle Obama Trail Project,” $575 million for U.N. family planning programs, $3.5 million for a congressional office of “Diversity and Inclusion,” and funding for LGBTQ+ projects in California, Ohio and New York.

Although the suffering of average American households was ignored in this legislation, the Biden White House received a 19.5% increase in funding for the operation of their offices.

To say this bill is a monstrosity is a vast understatement. Yet, it was passed with the support of 9 House Republicans and 18 Senate Republicans. These phony conservatives are de-facto Biden supporters and many of them supported the major pieces of legislation passed in the last two years.

In fact, Senate Minority Leader Mitch McConnell (R-KY) was positively giddy in excitement about the bill. He was especially happy it included $45 billion in additional aid to Ukraine, boosting the total support from the United States to over $100 billion since the start of the war. According to McConnell, “Providing assistance for Ukrainians to defeat the Russians is the number one priority for the United States right now according to most Republicans.”

Really? Did McConnell conduct a poll of Republicans to determine their “number one priority?” Of course not, McConnell is so entrenched in the D.C. beltway and supportive of our enhanced involvement in the war in Ukraine that he has not bothered to check with “most Republicans.”

Obviously, McConnell and his fellow establishment Republicans despise the base of their party. They supported an omnibus bill which limited border security funding. This is in sharp contrast to the Marquette University survey results which indicated that enhancing border security was the most important issue to Republicans with an astounding 94% favoring additional “efforts to stop illegal immigration along the southern border.”

Fortunately, there are a few Republicans who are in tune with the grassroots. Former President Trump blasted the bill, calling it an “unmitigated disaster.” U.S. Congressman Paul Gosar (R-AZ) claimed that “In all my travels across Arizona, not one of my constituents said that defending Ukraine should be our top priority. Not one.” This viewpoint was echoed by the U.S. Congressman Warren Davidson (R-OH), who lamented “It would be great to see America's leaders more focused on America's borders than on Ukraine's.”

Another problem with the legislation was that it was rushed through at the end of the lame duck session of Congress. As members of Congress were busy making travel arrangements to return to their homes, no one in Congress read the entire 4,155 pages of the pork infested bill. As noted by the U.S. Senator Rick Scott (R-FL), “Irresponsibly passing a bill that you have NO IDEA what's in it is NOT the answer.”

As noted by the Wall Street Journal, the omnibus spending bill was the “worst in history.” It passed at a time when there has never been a greater disconnect between the wishes of the American people and their leadership in Washington D.C. The Capitol Hill swamp places its priorities far above the desires of the American people.

As exposed in the recent Twitter file releases, major government agencies have been working overtime to censor viewpoints which are contrary to the policies of the federal government. It has been shown that the FBI and CIA pressured Twitter to censor social media posts with contrary opinions on the 2020 election, the Hunter Biden laptop, COVID-19, and the war in Ukraine.

This type of activity is beyond disturbing, it should be illegal. Our country cannot survive as a constitutional republic if government bureaucrats and politicians thwart the will of “We the People” through intimidation of media outlets.

As beautifully outlined in the Declaration of Independence, only governments “deriving their just powers from the consent of the governed” are legitimate. Otherwise “it is the Right of the People to alter or to abolish it.”

It is time for “We the People” to have a government that places our needs before the needs of foreign governments or corrupt politicians. At the very least, our federal government needs an attitude adjustment.