Protests in China have been frequent over the years, caused by issues as diverse as air pollution, mistreatment by police, and illegal land grabs as the Chinese Communists flagrantly disregard their own laws.

But long-time China-watchers at the BBC are shocked about the protests that have erupted in the last 48 hours. The latest demonstrations began as protests against the endless and maddening COVID-19 lockdowns.

But on Friday night, a fire in an apartment complex that killed ten people was the focus of protests against the Chinese government. The anti-COVID lockdown was being blamed for the slow response to the fire.

It is extremely dangerous here to publicly criticise the Communist Party’s general secretary. You risk being put in prison.

And yet there they were on the Shanghai street (Wulumuqi Lu) which carries the name of the Xinjiang city where a fire had killed 10 residents, and zero-Covid restrictions were blamed for hampering the rescue effort.

One protester calls out: “Xi Jinping!”

And hundreds reply: “Step down!”

For a political organisation with no greater priority than remaining in power, this is as big a challenge as they come.

This is why the Communists can’t allow these protests — referred to by some as the biggest protests since the Tiananmen Square massacre of 1989. Any challenge at all to its legitimacy must be met with the most brutal and bloody crackdown.

On dozens of university campuses, students held gatherings or put up posters to grieve the dead from the Xinjiang fire and speak out against zero-Covid. In several cities, residents in locked-down neighborhoods tore down barriers and took to the streets, following mass anti-lockdown protests that swept Urumqi on Friday night.

Such widespread scenes of anger and defiance – some of which stretched well into Sunday – are exceptionally rare in China, where the ruling Communist Party ruthlessly cracks down on all expressions of dissent. But three years into the pandemic, many people have been pushed to the brink by the government’s incessant use of lockdowns, Covid tests and quarantines.

The ratcheting-up of restrictions in recent months, coupled with a series of heartbreaking deaths blamed on an over-zealous policing of the controls, has brought matters to a head.

Lambs to the slaughter. We can admire their courage, but there is no chance that Xi will change his policies given how much the CCP has invested in them. The parameters of what triggers a lockdown must change — probably framed as a response to the “success” of Xi’s policies. That’s the only way that the Chinese Communists will alter their lockdown policy.

And the only relief in sight for the Chinese people. 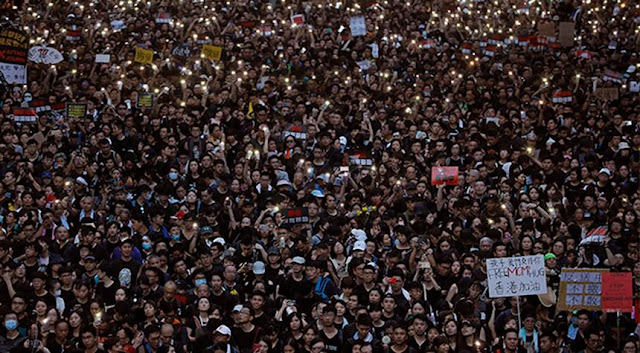 Things are touching off in China with people taking to the streets to oppose yet more lockdowns as part of the Chicom’s “zero-COVID” policy. Dictator Xi Jinping had recently ordered a fresh round of confinement following outbreaks in Wuhan and other cities.

Videos of the unrest are starting to come out of the normally tightly-controlled country. Protesters are clashing with police, tearing down barricades, and gathering in sizes not seen since the Tiananmen Square massacre some 30 years ago.

There have been reports of intense protests in Wuhan, Chengdu, and Shanghai, and Chinese authorities are beginning to organize their response. Journalists aren’t escaping their wrath. In one disturbing scene, a CNN reporter on the ground tried to get a comment from a police officer. He responded with an expletive.

In another instance, a BBC reporter was violently attacked, though his identity is a bit of a mystery. Hopefully, he’s alright and hasn’t been detained.

Videos of armored vehicles are being shared, signaling that the crackdown is coming. The Chinese government is so powerful, that street protests likely won’t pose much of a threat to it. Their police and armed forces number in the tens of millions, and because of that, we could be on the precipice of another massacre. I certainly hope that’s not how this ends, but that’s where things are heading.

Freedom is a beautiful thing. It’s also something that typically demands sacrifice. Where this goes from here will depend on just how much Chinese citizens are willing to give up to pursue it.

Here are the videos.

"This is why we have the second amendment. When the government comes for Americans, it is our right and our duty to shoot back. The Chinese people have no weapons and nothing to fight back with."