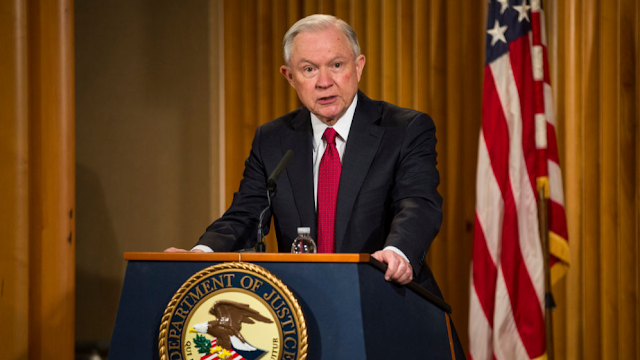 Photo: Getty Image
Attorney General Jeff Sessions made the formal announcement in a press briefing today that President Donald Trump has ended the Deferred Access for Childhood Arrivals (DACA) program that President Barack Obama put into place in 2012 that was a violation of our constitutional separation of powers.
Click here to view the announcement video.
Sessions says the Department of Justice represents all of the American people and integrity of the Constitution.
He states that Trump's leadership and immigration stance have led to reduction in the number of illegal immigrants passing through the southern border.
He also says that Congress should pass immigration legislation that advances the wishes of the American people.
Sessions continues by saying "we are people of compassion and we are people of law" but there is nothing compassionate in not enforcing immigration law. Failure to not enforce these laws have lead to crime.”
Sessions reads a quote that says DACA was passed because former President Obama disagreed with a part of the immigration policy and breached the separation of the branches of government.
The Department of Homeland Security issued a statement following Sessions' briefing that reiterates the "wind down" process that he mentioned.
That statement reads, in part:

“This Administration’s decision to terminate DACA was not taken lightly. The Department of Justice has carefully evaluated the program’s Constitutionality and determined it conflicts with our existing immigration laws,” said Acting [Department of Homeland Security] Secretary Elaine Duke. “As a result of recent litigation, we were faced with two options: wind the program down in an orderly fashion that protects beneficiaries in the near-term while working with Congress to pass legislation; or allow the judiciary to potentially shut the program down completely and immediately. We chose the least disruptive option.
“With the measures the Department is putting in place today, no current beneficiaries will be impacted before March 5, 2018, nearly six months from now, so Congress can have time to deliver on appropriate legislative solutions. However, I want to be clear that no new initial requests or associated applications filed after today will be acted on.”
U.S. House of Representatives Majority Leader Paul Ryan released his statement on the DACA announcement that reads, in part:
“However well-intentioned, President Obama’s DACA program was a clear abuse of executive authority, an attempt to create law out of thin air. Just as the courts have already struck down similar Obama policy, this was never a viable long-term solution to this challenge. Congress writes laws, not the president, and ending this program fulfills a promise that President Trump made to restore the proper role of the executive and legislative branches..."


http://www.foxnews.com/politics/2017/09/05/sessions-talks-trump-stance-on-daca-program-live-blog.html
Posted by Frances Rice at 11:53 AM