Is It Time To Remove All Statutes of All Black People In The United States? 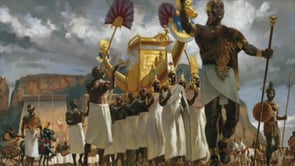 Since a black man owned the first slave in the colonies and Africans sold their fellow blacks into slavery, must there now be a demand to remove all statutes of black people in the United States?
See "The Truth About Slavery" video at: https://vimeo.com/161376819
Below is a follow up article about the disturbing effort by the black author Ta-Nehesi Coates to further divide our country along racial lines and destroy the Trump presidency.


Also below is a message from an average American who’s also fed up with the race mongering of left-wingers who hate our country and the president we elected protect our national security and lead our nation back to economic prosperity.
Further below is an article about how Hillary Clinton is still making excuses for losing the 2016 election.
__________________


Ta-Nehesi Coates has a new essay out about Trump that is generating a lot of buzz, entitled “The First White President.” Here are a couple of excerpts about what he has to say about Trump:
He is preeminently the white man’s President, entirely devoted to the welfare of white men. He is ready and willing at any time during the first year of his administration to deny, postpone, and sacrifice the rights of humanity in the colored people to promote the welfare of the white people of this country. In all his education and feeling he is an American of the Americans. He came into the Presidential chair upon one principle alone, namely, opposition to the extension of immigration. His arguments in furtherance of this policy have their motive and mainspring in his patriotic devotion to the interests of his own race. To protect, defend, and perpetuate slavery in the states where it existed Donald Trump is not less ready than any other President to draw the sword of the nation. . . Knowing this, I concede to you, my white fellow-citizens, a pre-eminence in this worship at once full and supreme.
Oh wait a minute. That’s not Coates; that’s Frederick Douglass, speaking about Abraham Lincoln at the dedication of the Freedman’s Monument in Washington DC on April 14, 1876. 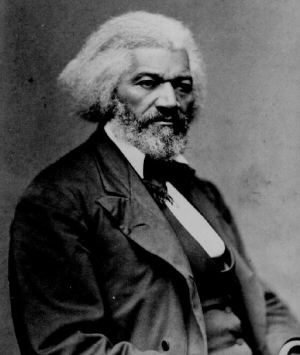 I took the small liberty of changing the verb tenses, swapping out “immigration” for “slavery” in the fourth sentence, and swapping “Trump” for “Lincoln” in the last sentence. None of these changes alter the argument of the passage. In other words, we have here Douglass arguing that Lincoln is pre-eminently a “white president,” and not the first by any means. 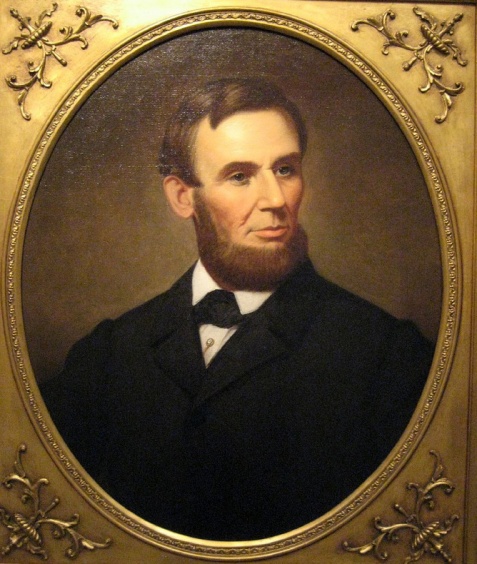 Of course, if you read the whole of Douglass’s oration, he makes out the case of why Lincoln should be honored, and by extension why the country he led is good and just, despite its obvious failings and mistakes.
By comparison Douglass reveals Coates to be the superficial thinker that he is.
Because of course many contemporary black thinkers—I suspect Coates is among them—believe Lincoln was a “white supremacist” pure and simple, no better or different than the Confederate leaders whose statues are being removed.
A “Black Lives Matter” protest a couple years back featured signs proclaiming “Lincoln was a racist,” and demanding that Lincoln be removed from the five-dollar bill. This is not a brand new charge. Ebony magazine in 1968 published an article entitled “Was Lincoln a White Supremacist?” (Answer: yes.)
Let’s take in a bit more of Douglass:
Despite the mist and haze that surrounded him; despite the tumult, the hurry, and confusion of the hour, we were able to take a comprehensive view of Abraham Lincoln, and to make reasonable allowance for the circumstances of his position. We saw him, measured him, and estimated him; not by stray utterances to injudicious and tedious delegations, who often tried his patience; not by isolated facts torn from their connection; not by any partial and imperfect glimpses, caught at inopportune moments; but by a broad survey, in the light of the stern logic of great events, and in view of that divinity which shapes our ends, rough hew them how we will, we came to the conclusion that the hour and the man of our redemption had somehow met in the person of Abraham Lincoln. It mattered little to us what language he might employ on special occasions; it mattered little to us, when we fully knew him, whether he was swift or slow in his movements; it was enough for us that Abraham Lincoln was at the head of a great movement, and was in living and earnest sympathy with that movement, which, in the nature of things, must go on until slavery should be utterly and forever abolished in the United States. . .
I have said that President Lincoln was a white man, and shared the prejudices common to his countrymen towards the colored race. Looking back to his times and to the condition of his country, we are compelled to admit that this unfriendly feeling on his part may be safely set down as one element of his wonderful success in organizing the loyal American people for the tremendous conflict before them, and bringing them safely through that conflict. His great mission was to accomplish two things: first, to save his country from dismemberment and ruin; and, second, to free his country from the great crime of slavery. To do one or the other, or both, he must have the earnest sympathy and the powerful cooperation of his loyal fellow-countrymen. Without this primary and essential condition to success his efforts must have been vain and utterly fruitless. Had he put the abolition of slavery before the salvation of the Union, he would have inevitably driven from him a powerful class of the American people and rendered resistance to rebellion impossible. Viewed from the genuine abolition ground, Mr. Lincoln seemed tardy, cold, dull, and indifferent; but measuring him by the sentiment of his country, a sentiment he was bound as a statesman to consult, he was swift, zealous, radical, and determined.
I doubt Coates would ever concede any part of Douglass’s argument. Just as environmentalists delight in every apocalyptic claim that comes along, Coates delights in the bitterness that descends from the view that America’s failings define the totality of America’s history and meaning. You might call it a different kind of supremacy.
NB: See Damon Linker’s dissent about Coates here.


A Message From:  Mark Hughes, An American Citizen
New Mental Illness.
Do You Know Someone Suffering From Trump Un-acceptance & Resistance Disorder (TURD)?
Know the signs, spot the symptoms, and save a life.
TURD is a pattern of pathologically dissociative and psychotic behavior, first observed in the late hours of November 8th 2016, and increasing in severity with passing time.
Sufferers of TURD often exhibit pronounced cognitive dissonance, sudden bouts of rage, rioting, uncontrollable crying and “unfriending” on Facebook.
TURD is caused by the election of Donald Trump as President of the United States of America.
For many, both in America and worldwide, this was a shocking and unexpected outcome; their preferred news sources having failed to inform them that the alternative candidate was a criminal, Socialist parasite in such ill health she got chucked into the back of a van like a kidnap victim.
Research is ongoing, but TURD appears to correlate closely with the following environmental and behavioral factors:
Membership in the Democratic Party
Identifies as an Actor or Artist
Exposure to a Liberal Arts college professor
Works for the Federal, State or Local government
Living in a densely populated metropolitan area
Massive student debt
Spotty or non-existent work history
Patients with TURD are very resistant to treatment, and dangerous in large groups.
Any possibility of treatment requires that they be separated from their hive-mind support apparatus; they cannot begin the process of accepting reality in the presence of encouragement towards delusion and irrationality.
Separation may require the assistance of law enforcement.
If you have a friend or loved one suffering from TURD, urge them to seek treatment.
Together we can beat this scourge, and Make America Great Again.
______________
“WHAT HAPPENED” IN A NUTSHELL
BY PAUL MIRENGOFF
Hillary Clinton’s book about her 2016 defeat is called What Happened.
Her answer, apparently, is that Bernie Sanders, Jill Stein, Barack Obama, the Russians, Joe Biden, James Comey, Anthony Weiner, the Electoral College, apathetic voters, and assorted misogynists behaved badly and/or let her down.
A better answer can be gleaned from this account by Maureen Callahan of a book signing event in New York City. Callahan writes:
Among the enduring criticisms of Hillary Clinton: Her sense of entitlement is limitless. She’s tone-deaf and doesn’t understand the average American — nor does she care to. Her greed is insatiable.
Add to this a gaping lack of self-awareness, and you have all the ingredients for the New York City launch of Hillary’s nationwide book tour Tuesday morning.
Callahan reports that thousands of people lined up outside the Barnes & Noble at Union Square hoping to meet their idol. Some even slept outside the night before.
They were willing to follow whatever directives were handed down by the apparatchiks. Here, in part, is what they were told:
A limited number of wristbands for entry will be distributed on a first-come, first-served basis with purchase of the featured title at Barnes & Noble Union Square. Hillary Rodham Clinton will sign copies of her new release, “What Happened” and the 2017 illustrated children’s edition of “It Takes a Village,” no exceptions or personalizing. She will sign up to two books per customer, one of which must be “What Happened.”
No other books or memorabilia please. Posed photos or selfies will not be taking place . . . Book purchase and wristbands are both required to meet the author, no exceptions. Customers without wristbands will not be allowed to participate in any capacity.
In other words, observes Callahan, attendees were to serve two purposes: To make sure What Happened debuts at No. 1 on the bestseller list and to line Hillary’s pockets. But at least she wasn’t charging $89 to $3,000 per head, as she is at upcoming events.
Clinton’s announced arrival time was 11:00 a.m. She arrived just before noon. According to Callahan:
[There was] no hello to the crowd, no thanks for the hours of waiting — let alone decades of support — no apology for or acknowledgment of being an hour late, or losing the most consequential election in American history. Not a single word. She just started signing.
I have a hard time imagining Donald Trump behaving this way. No apology, yes. Not a single word, no.
The wheelchair bound seniors near the stage were forced to move or, in some cases, wheeled away by staff. “We’re going for a ride,” one staffer explained.
If Donald Trump had treated his admirers the way Clinton treats hers, he wouldn’t have won a single primary. If Trump were as people-averse as Clinton, he would have lost the general election as badly as many of us expected him to. 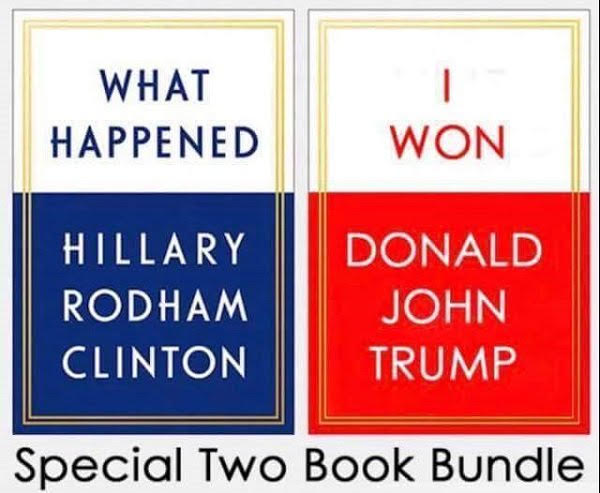 What happened in 2016? The electorate rejected, albeit narrowly, a candidate who professes love for “the people” but doesn’t seem to like people much and has no idea how to connect with them.
http://www.powerlineblog.com/archives/2017/09/what-happened-in-a-nutshell.php
Posted by Frances Rice at 1:14 PM