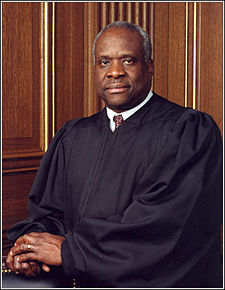 By Bradford Richardson
Just in time to celebrate its first anniversary, the Smithsonian’s National Museum of African American History and Culture has included a display featuring Justice Clarence Thomas, one of the U.S. Supreme Court’s conservative stalwarts.
Justice Thomas appears in an exhibit that was installed Sunday, a Smithsonian spokeswoman said Monday. The display honors both of the black justices who ascended to the pinnacle of the legal profession. The other is Thurgood Marshall.
Justice Thomas’ apparent omission irked conservative observers, who suspected an ideological bias among Smithsonian officials and called for the influential jurist’s inclusion in the museum.

Ronald D. Rotunda, distinguished professor of jurisprudence at the Dale E. Fowler School of Law at Chapman University, said Justice Thomas deserves to be recognized for his contributions to constitutional jurisprudence, his record of public service and his inspirational life story.
“Like Thurgood Marshall, he has been a very influential justice, and like Thurgood Marshall, he has risen from humble beginnings,” Mr. Rotunda said. “His father left him, his grandparents raised him. The 1968 assassination of Martin Luther King Jr. turned him to the law. He left a successful corporate law practice and turned to public service. That path led him to the Supreme Court.”
Mr. Rotunda said it’s “surprising that it has taken so long” for the museum to acknowledge such a “seminal figure on the U.S. Supreme Court.”
http://www.washingtontimes.com/news/2017/sep/25/clarence-thomas-spot-african-american-museum/
Posted by Frances Rice at 10:23 AM