Tucker Carlson: "Patronizing Assurances That No One Was Spying On Political Campaigns Were False, Probably Intentionally So" 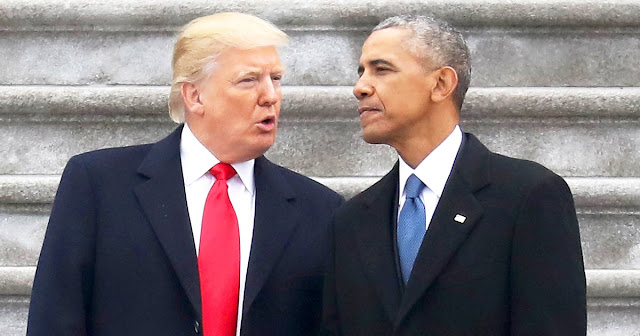 By Tim Hains TUCKER CARLSON: According to a new report from CNN, Paul Manafort, who for a time last year was the Trump campaign chairman, was indeed wiretapped by the federal government, both before and after the election.
Manafort, it ought to be noted, had an apartment inside Trump Tower at that time, so it is virtually certain that surveillance of him would have included other members of the Trump campaign staff, maybe even Trump himself.
In other words, it looks like Trump's tweet may have been right.
So why did three top members of Congress from both parties, and the country's top law enforcement officers all assure us that the surveillance didn't happen? That there wasn't a shred of evidence to suggest it had happened? Were they lying or did tey simply not know?
Neither answer is comforting.
Either the intelligence agency has gone rogue, pursuing its own goals without meaningful oversight from elected officials, or, our elected officials are colluding with each other to lie to the public, apparently for political reasons.

All of Obama’s Wiretappers
By George Neumayr 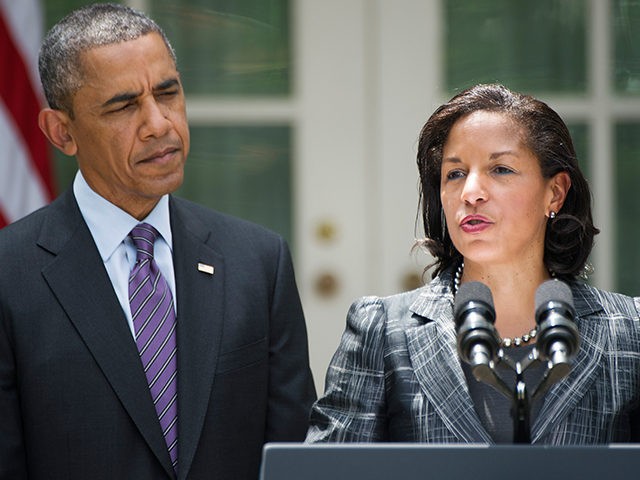 REVEALED: Susan Rice, one of Hillary’s most fervent supporters, spied on a post-election meeting between a prince from the United Arab Emirates and Trump aides.


Behind his political espionage of Trump, which benefited Hillary, lay an enormous sense of entitlement.
Hillary Clinton’s campaign memoir rests on an astonishingly audacious lie: that the very FBI director who made her campaign possible by improperly sparing her from an indictment doomed it. A normal pol who had mishandled classified information as egregiously as Hillary would have felt eternal gratitude to Comey. Only an entitled ingrate like Hillary would have the gall to cast her savior as the chief thorn in her side.
Nor does Hillary acknowledge another in-kind contribution to her campaign from Comey: his willingness to serve as a cog in Obama’s campaign of political espionage against Trump. Obama’s team of Hillary partisans, which included among others John Brennan, Susan Rice, and Loretta Lynch, wanted Comey to snoop on Trumpworld and he duly did.
It was reported this week that the FBI had until as recently as earlier this year been intercepting the communications of Paul Manafort, one of Trump’s campaign chairmen. This means that Comey, contrary to his lawyerly denial of Trump’s wiretapping claim, had the means to eavesdrop on any communications between Manafort and Trump.
Even at this late date, quibbling partisans in the media say that is insufficient proof of Trump’s claim. But could anyone imagine the Maggie Habermans bothering with such pedantry if George Bush’s FBI director had been snooping on David Axelrod?
The same generation of reporters who watched All the President’s Men breathlessly now shill for the propriety of political espionage.
They rush to offer what they consider high-minded reasons for wiretaps of Trump campaign officials. But those reasons, at least as this point, amount to nothing more than the haziest gossip.
One of the supposed reasons for the wiretaps, rich in irony given Hillary’s complaint that foreigners interfered in the election, is that an ex-Brit spy, probably on Comey’s payroll (the FBI still won’t address this matter) and certainly on the payroll of pro-Hillary partisans, told U.S. government officials that Manafort was colluding with the Russians.
Here Hillary benefited from the election-tipping of a foreigner, whose idiotic whisperings entertained by the FBI would turn up on the front pages of the New York Times at crucial moments in the campaign.
This, by the way, throws light on another outrageously dishonest Hillary claim: that Comey never told anyone of his investigation into the Trump campaign.
Of course, he did — through leaks.
That was bad enough but Comey made the leaks worse by not telling reporters that the investigation into the Trump campaign excluded Trump as a target. Comey let reporters think that Trump was one. Again, no gratitude from Hillary.
Another recent revelation is that Susan Rice, one of Hillary’s most fervent supporters, spied on a post-election meeting between a prince from the United Arab Emirates and Trump aides. The media shrugged at the revelation, as if such snooping falls within the bounds of a blameless norm.
An even slightly curious press, were it not in the tank for the Dems, would be agog at the news that one administration was spying on an incoming administration and demand an accounting of such an abuse of power.
Had the George Bush administration, out of post-election spite, spied on pre-inauguration meetings between Obama’s people and officials from a Middle Eastern country, the press would still be talking about it as a historic abuse of power. But in Rice’s case, they hastily inform their audience that “such unmaskings are perfectly legal.”
The media’s customary double standard for Democrats, combined with its treatment of Trump as a singularly monstrous Republican candidate (and then incoming president), served as a safety net beneath such high-wire political espionage. Rice knew that even if she fell in her attempt to nail Trump the media would catch her.
The scandal at the center of the 2016 election was not that Trump colluded with Russians to win but that the media and the Obama administration colluded with Hillary to defeat him.
The loudest cries of “foreign influence over the election” came from Hillary partisans who sought it, whether it was John Brennan running off to England and Estonia to collect dirt on Trump from their spies or deep-state clowns at the FBI who wanted to turn Christopher Steele into an asset.
The villain, in this sorry fable, turned out to be the victim.
https://spectator.org/all-of-obamas-wiretappers/
_____________ 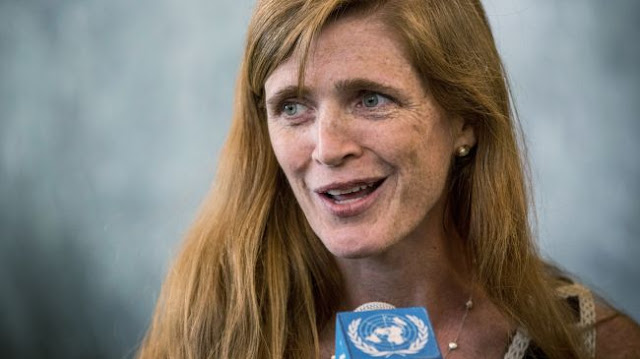 By Bret Baier, Catherine Herridge
Sources tell Fox News that Samantha Power made hundreds of unmasking requesting in the final year of the Obama administration

Samantha Power, the former U.S. ambassador to the United Nations, was 'unmasking' at such a rapid pace in the final months of the Obama administration that she averaged more than one request for every working day in 2016 – and even sought information in the days leading up to President Trump’s inauguration, multiple sources close to the matter told Fox News.
Two sources, who were not authorized to speak on the record, said the requests to identify Americans whose names surfaced in foreign intelligence reporting, known as unmasking, exceeded 260 last year. One source indicated this occurred in the final days of the Obama White House.
The details emerged ahead of an expected appearance by Power next month on Capitol Hill. She is one of several Obama administration officials facing congressional scrutiny for their role in seeking the identities of Trump associates in intelligence reports – but the interest in her actions is particularly high.
OBAMA OFFICIAL MADE 'HUNDREDS OF UNMASKING REQUESTS,' GOP CHAIRMAN SAYS

In a July 27 letter to Director of National Intelligence Dan Coats, House Intelligence Committee Chairman Devin Nunes, R-Calif., said the committee had learned "that one official, whose position had no apparent intelligence-related function, made hundreds of unmasking requests during the final year of the Obama Administration."
The "official" is widely reported to be Power.
During a public congressional hearing earlier this year, Republican Rep. Trey Gowdy of South Carolina pressed former CIA director John Brennan on unmasking, without mentioning Power by name.
Gowdy: Do you recall any U.S. ambassadors asking that names be unmasked?
Brennan: I don't know. Maybe it's ringing a vague bell but I'm not -- I could not answer with any confidence.
Gowdy continued, asking: On either January 19 or up till noon on January 20, did you make any unmasking requests?
Brennan: I do not believe I did.
Gowdy: So you did not make any requests on the last day that you were employed?
Brennan: No, I was not in the agency on the last day I was employed.
Brennan later corrected the record, confirming he was at CIA headquarters on January 20. "I went there to collect some final personal materials as well as to pay my last respects to a memorial wall. But I was there for a brief period of time and just to take care of some final -- final things that were important to me," Brennan said.
Three of the nation's intelligence agencies received subpoenas in May explicitly naming three top Obama administration officials: Former national security adviser Susan Rice, Brennan and Power. Records were requested for Ben Rhodes, then-President Barack Obama's adviser, but the documents were not the subject of a subpoena.
A spokesperson for Power had no comment on the number or timing of her requests. But in a previous statement, her lawyer David Pressman emphasized that, "While serving as our Permanent Representative to the United Nations, Ambassador Power was also a member of the National Security Council responsible for advising the President on the full-range of threats confronting the United States. Any insinuation that Ambassador Power was involved in leaking classified information is absolutely false."
During congressional testimony since the unmasking controversy began, National Security Agency Director Adm. Mike Rogers has explained that unmasking is handled by the intelligence community in an independent review.
"We [the NSA] apply two criteria in response to their request: number one, you must make the request in writing. Number two, the request must be made on the basis of your official duties, not the fact that you just find this report really interesting and you're just curious,” he said in June. “It has to tie to your job and finally, I said two but there's a third criteria, and is the basis of the request must be that you need this identity to understand the intelligence you're reading."
Previous U.N. ambassadors have made unmasking requests, but Fox News was told they number in the low double digits.
Power has agreed to meet with the Senate and House intelligence committees as part of the Russia probe. She is expected before the House committee in a private, classified session in October.
http://www.foxnews.com/politics/2017/09/20/samantha-power-sought-to-unmask-americans-on-almost-daily-basis-sources-say.html
Posted by Frances Rice at 9:56 AM