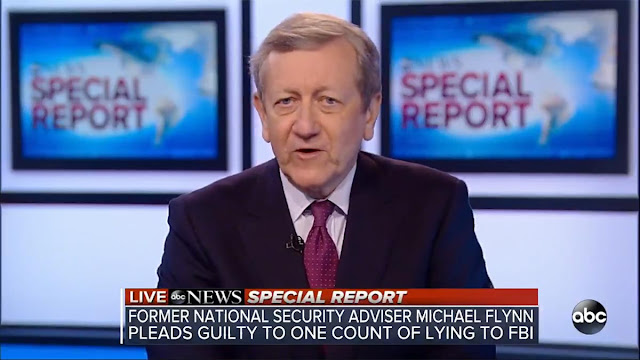 ABC News announced Saturday that it has suspended investigative reporter Brian Ross for four weeks without pay after Ross was forced to correct a bombshell on-air report about Michael Flynn.


"We deeply regret and apologize for the serious error we made yesterday. The reporting conveyed by Brian Ross during the special report had not been fully vetted through our editorial standards process," ABC said in a statement. "As a result of our continued reporting over the next several hours ultimately we determined the information was wrong and we corrected the mistake on air and online."
"It is vital we get the story right and retain the trust we have built with our audience -- these are our core principles," the statement added. "We fell far short of that yesterday."
Citing a single anonymous source, Ross told viewers during an ABC special report on Friday morning that Flynn was prepared to testify that Donald Trump, as a candidate for president, told him to contact Russians.
During Friday's edition of "World News Tonight," Ross walked back his report, telling viewers that the source who had provided the initial information for his story later told him that it was as president-elect, not as a candidate, that Trump asked Flynn to contact Russians.
An ABC News tweet about the report was retweeted about 25,000 times before being deleted.
Ross' incorrect report prompted a dramatic reaction in the financial markets, and the Dow fell more than 350 points. Stocks largely recovered later in the day.
CNN had initially reached out to ABC News early Friday afternoon to ask why Ross' initial reporting was not included in the network's online story about Flynn pleading guilty for lying to the FBI. Hours later, a spokesperson told CNN a correction was forthcoming.
But ABC News initially attempted to downplay the mistake, referring to its correction as a "clarification" on "World News Tonight" and then online. After a barrage of criticism, the network changed the language online from "clarification" to "correction."
Saturday evening's statement further ramped up the language; the network now calls it a "serious error."
Ross commented later Saturday night. "My job is to hold people accountable and that's why I agree with being held accountable myself," he tweeted.
Shortly after that, President Trump weighed in, tweeting his "congratulations" to ABC News for suspending Ross.
Multiple ABC News employees, speaking on the condition of anonymity because they weren't publicly authorized to discuss the matter, told CNNMoney on Saturday there was internal embarrassment over the blunder.
"It's a major embarrassment," one ABC News employee said.
"It makes me cringe," echoed another. "This is not what any networks needs when people are so quick to say 'fake news' to you. It makes me sick to my stomach."
This is not the first high-profile mistake by Ross. In a 2012 piece for which he apologized, he suggested that the Aurora shooter may have had a connection to the Tea Party.
http://money.cnn.com/2017/12/02/media/abc-news-brian-ross/index.html
Posted by Frances Rice at 2:59 PM