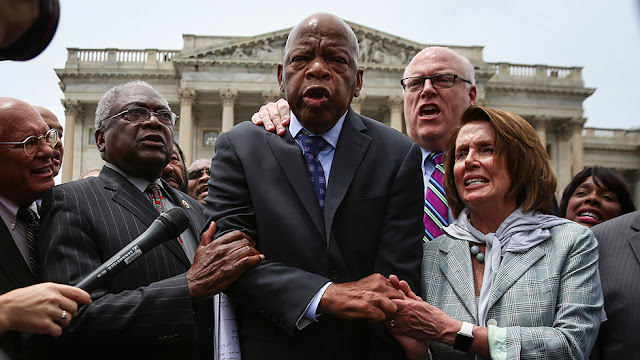 Dishonorable is an apt description of the behavior of Rep. John Lewis who refused to attend the Civil Rights Museum opening in Mississippi where President Donald Trump spoke on behalf of our nation at the invitation of the governor of Mississippi.

In the true form of a disparaging cynic, Rep. Lewis would have condemned President Trump if he had turned down that invitation.


Reprehensible is how Rep. Lewis has aligned himself with the racist Democratic Party he was fighting during the modern-day1960s civil rights era.
As author Michael Scheuer wrote, the Democratic Party is the party of the four S’s: slavery, secession, segregation and now socialism.
The Democratic Party was sued for their 200-year history of racism by Wayne Perryman and the case went all the way to the US Supreme Court.
In his lawsuit, Perryman describes how the Democratic Party became known as the "Party of White Supremacy" that fought to preserve slavery and enacted discriminatory laws to deny civil rights to blacks.
Perryman also wrote a book called “Whites, Blacks and Racist Democrats: The Untold Story of Race & Politics Within the Democratic Party from 1792-2009” that includes a copy of his lawsuit.
Democrats have run Black communities for the past 60 years and the socialist policies of Democrats have turned those communities into economic and social wastelands, witness Detroit, South Chicago and Baltimore. In his book, “Dreams from My Father,” former President Barack Obama described what he and other Democrats do to poor blacks as “plantation politics.”
For more details, see the article “Civil Rights History And Current State Of Economic Equality For Black Americans” at: http://blackrepublican.blogspot.com/p/history-of-civil-rights-in-nutshell.html
Rep. Lewis has shamefully sold his soul to the racist/socialist Democratic Party for thirty pieces of silver and become a modern-day Judas. Will he ever be held accountable for his complicity in the destruction of black neighborhoods?
Posted by Frances Rice at 10:35 AM