HuffPo Laments That One Year in, ‘Trump Is Winning’ 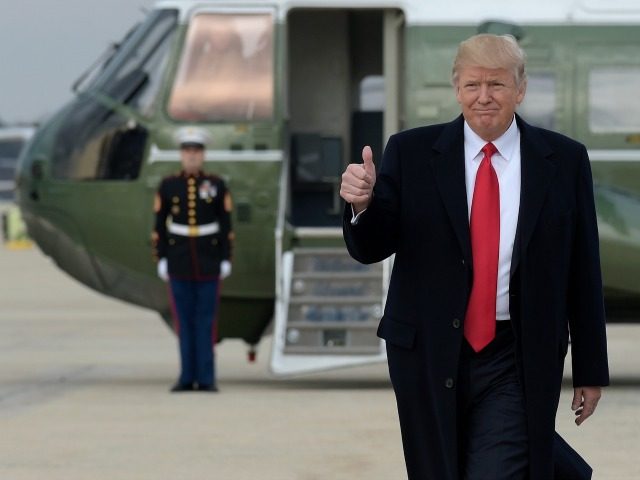 AP/Susan Walsh
In the midst of much hand-wringing and anguished sighs, the Huffington Post has announced to its readers that after his first year in office “Trump Is Winning.”


“This is one of the hardest things I’ve ever had to write and admit,” begins Earl Ofari Hutchinson in his essay, “Trump is winning.”
Hutchinson, an author and co-host of the Al Sharpton Show, observes that according to numerous indicators the Trump presidency is a success, beginning with his delivery of a long list of campaign promises.
Among Mr. Trump’s many victories, Hutchinson enumerates Mick Mulvaney’s appointment to head the Consumer Financial Protection Bureau, Neil Gorsuch’s contribution to the Supreme Court, Scott Pruitt’s work at the EPA, Trump’s support of fossil fuels to make America energy independent, the RNC backing of judge Roy Moore in Alabama, the fizzling out of Russiagate, the passage of the tax reform bill, and the record-level stock market.
Yet all of these wins are small potatoes compared to Trump’s three top victories, Hutchinson claims.
First, the President has successfully taken charge of the Republican Party. “He is the point man for GOP policy and issues and, in a perverse way, the spur to get action on them,” Hutchinson notes.
Second, Mr. Trump has managed to energize his base and keep their loyalty. The “overwhelming majority” of Republican voters continues to back him, Hutchinson admits.
“This is the voter loyalty that buys a lot of support from the GOP establishment even as they flail him or shake their head in disgust at his antics,” he writes.
Third, Trump has successfully harnessed the mainstream media for his own purposes. “He remains a ratings cash cow for the networks and makes stunning copy for the print media,” Hutchinson complains.
“He knew that from day one of his presidential bid and he knows it even more now. He will continue to suck the media air out of everything that the Democrats do and try to do.”
While praising the war on Trump waged by the New York Times and “other liberal print publications,” Hutchinson recognizes that for much of the Trump base these papers have lost all credibility. “So the withering criticism of Trump in these publications is tantamount to a wolf howling in the wind,” he says.
After a string of jabs about Trump’s “phony war” with the NFL, his “bumbling, inept, and dangerous handling of the North Korea nuclear threat,” and his “clueless saber rattle” over the Iran nuclear pact, Hutchinson finds himself forced to confess that Trump has managed to come out on top.
For Trump so far, “this has been a win-win, and a sad one to admit,” he writes.
Of course, from Hutchinson’s perspective, all of these triumphs are bad for America. The Trump base of benighted deplorables and hobbits don’t realize that what seem to be victories are really long-term defeats and ultimately won’t benefit them at all, he whines.
One thing seems certain.
The annoying habit leftist elites have of condescendingly telling other people what is best for them isn’t gaining them any friends.
It didn’t work in 2016 and it doesn’t work now.
And then they wonder why Trump is winning.