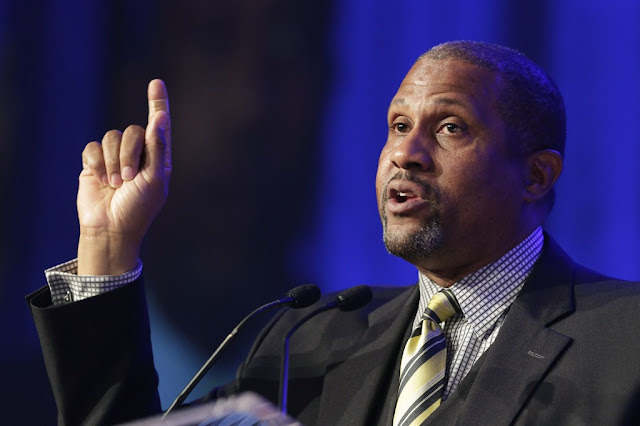 Variety published an exclusive this afternoon saying PBS host Tavis Smiley has been suspended by the network in the wake of a sexual misconduct investigation.
“Effective today, PBS has indefinitely suspended distribution of ‘Tavis Smiley,’ produced by TS Media, an independent production company,” the public broadcaster said. “PBS engaged an outside law firm to conduct an investigation immediately after learning of troubling allegations regarding Mr. Smiley. This investigation included interviews with witnesses as well as with Mr. Smiley. The inquiry uncovered multiple, credible allegations of conduct that is inconsistent with the values and standards of PBS, and the totality of this information led to today’s decision.”…
The investigation found credible allegations that Smiley had engaged in sexual relationships with multiple subordinates, sources said. Some witnesses interviewed expressed concern that their employment status was linked to the status of a sexual relationship with Smiley. In general, witnesses described Smiley as creating a verbally abusive and threatening environment that went beyond what could be expected in a typical high-pressure work environment. Several expressed concerns about retaliation.
Earlier this year a former producer for Tavis Smiley’s show wrote a piece for the Observer attacking Smiley. The piece included this detail about a trip to North Dakota to visit the anti-pipeline camp which had formed there:
I look back in the car and see Blanca, a young woman that Tavis had picked up at the Orlando airport and brought along as a f**k buddy. “Look at her, she’s so stupid,” he tells me, during our stop over from New York to Bismarck at Chick-fil-A in the Minneapolis airport Delta terminal after Blanca had left us at the counter and walked toward the gate. “How am I gonna carry all this food and my bags now? I specifically told her to wait for us,” he tells me angrily. Tavis’ misogyny is always creeping around, barely camouflaged by Midwestern good manners in line with the most duplicitous guys who always open doors, buy flowers and carry luggage until their girlfriends end up scrambling for some hotline 800 number…
“If anyone back in L.A. mentions the name Blanca,” Tavis tells me as soon as we are alone in the rented SUV once we arrived at the Oceti camp, “just tell them she was your girlfriend, that you brought her along. Don’t say anything about her to Kim in particular.” The question of my relationship status and if saying I was with Blanca would put me in a very difficult situation with people at the show who knew about my private life never even crossed his mind.
The producer never says or suggests the relationship between Smiley and Blanca was anything but consensual but he definitely gives the impression Smiley didn’t have a lot of respect for her.
Smiley is the second major host at PBS to be involved in sexual harassment allegations. Host Charlie Rose was fired by PBS after a Washington Post story alleged several instances of sexual harassment. PBS’s radio equivalent, NPR, has also fired two senior executives over allegations of sexual harassment.


https://hotair.com/archives/2017/12/13/pbs-suspends-tavis-smiley-sexual-misconduct-allegation/
Posted by Frances Rice at 10:31 AM