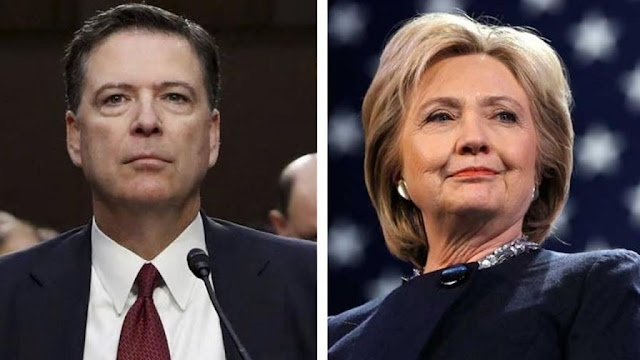 Newly released documents obtained by Fox News reveal that then-FBI Director James Comey’s draft statement on the Hillary Clinton email probe was edited numerous times before his public announcement, in ways that seemed to water down the bureau’s findings considerably.
Sen. Ron Johnson, R-Wis., chairman of the Senate Homeland Security Committee, sent a letter to the FBI on Thursday that shows the multiple edits to Comey’s highly scrutinized statement.
n an early draft, Comey said it was “reasonably likely” that “hostile actors” gained access to then-Secretary of State Hillary Clinton’s private email account. That was changed later to say the scenario was merely “possible.”
Another edit showed language was changed to describe the actions of Clinton and her colleagues as “extremely careless” as opposed to “grossly negligent.” This is a key legal distinction.
Johnson, writing about his concerns in a letter Thursday to FBI Director Christopher Wray, said the original “could be read as a finding of criminality in Secretary Clinton’s handling of classified material.”


He added, “The edited statement deleted the reference to gross negligence – a legal threshold for mishandling classified material – and instead replaced it with an exculpatory sentence.”
The edits also showed that references to specific potential violations of statutes on “gross negligence
” regarding classified information and “misdemeanor handling” were removed.


The final statement also removed a reference to the “sheer volume” of classified information discussed on email.
“While the precise dates of the edits and identities of the editors are not apparent from the documents, the edits appear to change the tone and substance of Director Comey’s statement in at least three respects,” Johnson wrote Thursday.
That includes, Johnson said, “repeated edits to reduce Secretary Clinton’s culpability in mishandling classified information.”
Johnson continued, “In summary, the edits to Director Comey’s public statement, made months prior to the conclusion of the FBI’s investigation of Secretary Clinton’s conduct, had a significant impact on the FBI’s public evaluation of the implications of her actions.”
Johnson referenced newly revealed anti-Trump text messages exchanged between FBI officials who at one point worked on the Robert Mueller Russia probe.
Fox News has confirmed that one of those officials, Peter Strzok, a former deputy to the assistant director for counterintelligence at the FBI, was the person who changed the language from “grossly negligent” to “extremely careless.”


REPUBLICANS TURN FOCUS TO MCCABE OVER TEXTS ON 'INSURANCE' AGAINST TRUMP


“This effort, seen in light of the personal animus toward then-candidate Trump by senior FBI agents leading the Clinton investigation and their apparent desire to create an ‘insurance policy’ against Mr. Trump’s election, raise profound questions about the FBI’s role and possible interference in the 2016 presidential election and the role of the same agents in Special Counsel Mueller’s investigation by President Trump,” Johnson said.
According to Johnson, Comey emailed a draft statement to top FBI officials clearing Clinton of criminal wrongdoing in May of 2016 -- two months before the FBI completed two dozen interviews, including with Clinton herself.
“I’ve been trying to imagine what it would look like if I decided to do an FBI only press event to close out our work and hand the matter to the DOJ,” Comey wrote at the top of the draft. “To help shape out discussions of whether that, or something different, makes sense, I have spent some time crafting what I would say, which follows. In my imagination, I don’t see me taking any questions. Here is what it might look like.”
Comey delivered his statement on the Clinton case in July 2016, calling her actions “extremely careless” while recommending against criminal charges.
The Senate Homeland Security Committee is doing oversight of the Justice Department's Office of Special Counsel's investigation into whether Comey violated the Hatch Act with his statement. The Hatch Act limits the political activities of federal employees.
Fox News’ Alex Pappas contributed to this report.
Jake Gibson is a producer working at the Fox News Washington bureau who covers politics, law enforcement and intelligence issues.