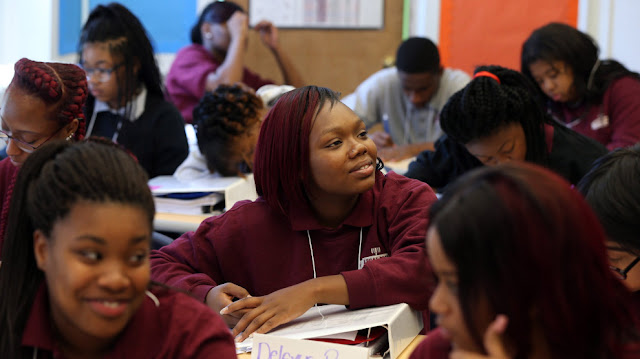 The Associated Press published a hit piece earlier this month that blamed charter schools for perpetrating racial segregation. No shock there. The mainstream press has long been sympathetic to left-wing critiques of school choice, and racial imbalance in the classroom is regularly trotted out by union leaders like Randi Weingarten of the American Federation of Teachers as a reason to ban charter schools, however high-performing.
More interesting (and somewhat encouraging) was the backlash to the AP “analysis” from others on the political left. Shavar Jeffries of Democrats for Education Reform, an outfit that advocates school choice, faulted the reporters’ methodology, among other issues.
The AP makes “apples-to-oranges comparisons that contrast the demographics of individual charter schools to those of entire cities,” he said. “This ignores the blatantly obvious fact that charter schools are concentrated in neighborhoods with high proportions of students of color to provide them an alternative to the low-performing traditional public schools they previously had no choice but to attend.”
But Mr. Jeffries seemed even more taken aback by the premise of the AP story. To wit: the supposed importance of the role white students play in the education of black students. “There’s no doubt there are benefits for students who attend racially diverse schools,” he said, but “we take issue with the assumption that black and brown children can’t learn unless they attend school alongside white children.”
Mr. Jeffries’s criticism was almost mild in comparison to that of Amy Wilkins of the National Alliance of Public Charter Schools, who took personal umbrage at the implication that school-choice proponents like herself have made common cause with the racial segregationists of yesteryear.
Ms. Wilkins hails from what could accurately be described as civil-rights royalty. She is the daughter of Roger Wilkins, the black political activist, journalist and academic, who served in the Kennedy and Johnson administrations. And she is the niece of Roy Wilkins, who led the NAACP in the 1950s and ’60s, two of the most consequential decades in the effort to abolish Jim Crow oppression.
Ms. Wilkins has spent her adult life as an outspoken advocate for black children, and after the AP story appeared she wrote a response in the education-news website The 74 that pulled no punches.


The problem, wrote Ms. Wilkins, “isn’t one article, however off-base it may be. The problem is the mindset of revanchists who peddle stories like these—professional anti-reformers who go nuts when approaches other than those they sanction and control deliver results for the students . . . they insist cannot learn at high levels.”
Black parents simply want better schools, and the strong demand for education choice among low-income families stems from the persistent failure of traditional public-school systems to provide a decent education for their children.
“There is no comparison—none—between the enforced segregation of the pre-Brown v. Board era and the choices black families make when they enroll their children in better schools,” wrote Ms. Wilkins. “It’s ludicrous to suggest the two are in any way similar.
In fact, it’s far closer to the spirit of Jim Crow to tell a black student that she has to go to her dismal neighborhood school because the better charter school up the street is not white enough to satisfy the defenders of the status quo.”
It isn’t obvious from the media coverage of school choice, but education reform is less a left-right issue than it is an internal debate among Democrats, who are torn between carrying water for organized labor and prioritizing the interest of low-income minorities.
The primary obstacle to advancing school choice for liberals like Mr. Jeffries and Ms. Wilkins is not conservative Republicans. Rather, it’s liberal Democrats, who tend to control the levers of power in urban centers populated by the black poor.
Even the AP report acknowledged that “on average, children in hyper-segregated charters do at least marginally better on tests than those in comparably segregated traditional schools.”
Charter schools are also less violent and produce higher rates of graduation and college completion.
As the Shavar Jefferieses and Amy Wilkinses and others on the school reform left understand, parental choice scares defenders of the status quo not because it’s ineffective or somehow harmful but because it works.
“To the people trying to fabricate a segregation story to deny black students educational opportunity, I have a simple message: Don’t you dare,” wrote Ms. Wilkins.
“Don’t you dare try to take away choices black families have fought for. Don’t you dare tell black families that you know better than they do what kind of school their children should attend. Don’t you dare call yourself social justice warriors while undermining the work of black school leaders and educators who are building something better for their communities.”