The U.S. Media Suffered its Most Humiliating Debacle in Ages: Now Refuses All Transparency Over What Happened 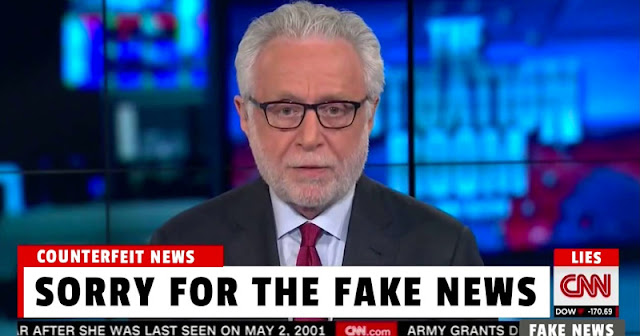 Friday was one of the most embarrassing days for the U.S. media in quite a long time. The humiliation orgy was kicked off by CNN, with MSNBC and CBS close behind, with countless pundits, commentators and operatives joining the party throughout the day. By the end of the day, it was clear that several of the nation’s largest and most influential news outlets had spread an explosive but completely false news story to millions of people, while refusing to provide any explanation of how it happened.
The spectacle began on Friday morning at 11:00 am EST, when the Most Trusted Name in News™ spent 12 straight minutes on air flamboyantly hyping an exclusive bombshell report that seemed to prove that WikiLeaks, last September, had secretly offered the Trump campaign, even Donald Trump himself, special access to the DNC emails before they were published on the internet. As CNN sees the world, this would prove collusion between the Trump family and WikiLeaks and, more importantly, between Trump and Russia, since the U.S. intelligence community regards WikiLeaks as an “arm of Russian intelligence,” and therefore, so does the U.S. media.
This entire revelation was based on an email which CNN strongly implied it had exclusively obtained and had in its possession. The email was sent by someone named “Michael J. Erickson” – someone nobody had heard of previously and whom CNN could not identify – to Donald Trump, Jr., offering a decryption key and access to DNC emails that WikiLeaks had “uploaded.” The email was a smoking gun, in CNN’s extremely excited mind, because it was dated September 4 – ten days before WikiLeaks began promoting access to those emails online – and thus proved that the Trump family was being offered special, unique access to the DNC archive: likely by WikiLeaks and the Kremlin.
It’s impossible to convey with words what a spectacularly devastating scoop CNN believed it had, so it’s necessary to watch it for yourself to see the tone of excitement, breathlessness and gravity the network conveyed as they clearly believed they were delivering a near-fatal blow on the Trump/Russia collusion story:


There was just one small problem with this story: it was fundamentally false, in the most embarrassing way possible. Hours after CNN broadcast its story – and then hyped it over and over and over – the Washington Post reported that CNN got the key fact of the story wrong.
The email was not dated September 4, as CNN claimed, but rather September 14 – which means it was sent after WikiLeaks had already published access to the DNC emails online. Thus, rather than offering some sort of special access to Trump, “Michael J. Erickson” was simply some random person from the public encouraging the Trump family to look at the publicly available DNC emails that WikiLeaks – as everyone by then already knew – had publicly promoted. In other words, the email was the exact opposite of what CNN presented it as being.
…
Why does this matter so much? For so many significant reasons:
To begin with, it’s hard to overstate how fast, far and wide this false story traveled. Democratic Party pundits, operatives and journalists with huge social media platforms predictably jumped on the story immediately, announcing that it proved collusion between Trump and Russia (through WikiLeaks). One tweet from Democratic Congressman Ted Lieu, claiming that this proved evidence of criminal collusion, was re-tweeted thousands and thousands of times in just a few hours (Lieu quietly deleted the tweet after I noted its falsity, and long after it went very viral, without ever telling his followers that the CNN story, and therefore his accusation, had been debunked).
…
Second, the “multiple sources” who fed CNN this false information did not confine themselves to that network. They were apparently very busy eagerly spreading the false information to as many media outlets as they could find. In the middle of the day, CBS News claimed that it had independently “confirmed” CNN’s story about the email, and published its own breathless article discussing the grave implications of this discovered collusion.
Most embarrassing of all was what MSNBC did. You just have to watch this report from its “intelligence and national security correspondent” Ken Dilanian to believe it. Like CBS, Dilanian also claimed that he independently “confirmed” the false CNN report from “two sources with direct knowledge of this.” Dilanian, whose career in the U.S. media continues to flourish the more he is exposed as someone who faithfully parrots what the CIA tells him to say (since that is one of the most coveted and valued attributes in US journalism), spent three minutes mixing evidence-free CIA claims as fact with totally false assertions about what his multiple “sources with direct knowledge” told him about all this.
Click Here To Read The Rest Of This Shocking Story.
Posted by Frances Rice at 12:21 PM