Dems Divide Us by Race While Trump Expands Economic Pie 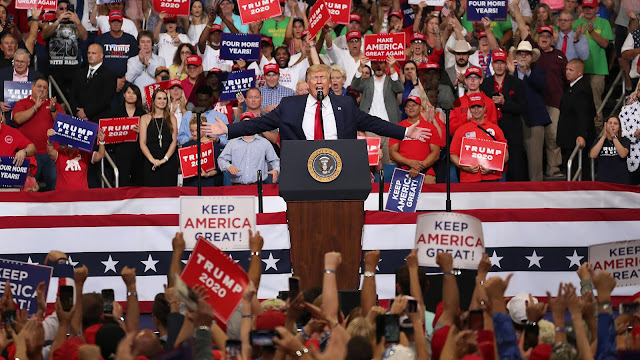 The black and Hispanic unemployment rates both just hit another all-time low, proving that the Trump administration's focus on providing equal opportunity to all Americans is doing more to empower racial minorities than any of the divisive approaches the Democrats have ever tried.

President Trump has advanced an economic agenda that puts American workers at the center of the government’s decision-making. Policies such as cutting taxes for middle-income workers, fighting back against foreign trade cheaters, and stopping the flow of illegal immigration empower all workers and are improving the lives of working Americans and their families.

These policies have had remarkable effects, especially for blacks, Hispanics, Asian Americans, and women, all of whom have achieved all-time low unemployment rates on this president’s watch — and the outlook just keeps getting better.

The African American unemployment rate, for instance, fell to a new record low of 5.5% in August, significantly lower than the previous record of 5.9% that was set in May 2018. The unemployment rate for black women dropped even more precipitously, from 5.2% to 4.4%. The current disparity between the black and white unemployment rate is at the lowest point on record, proving that the president’s pursuit of indiscriminate prosperity is succeeding at reducing racial economic inequalities.

Latino unemployment also decreased in August, matching historic lows set earlier this year thanks to the Trump administration’s policies. With an unemployment rate of only 4.2%, Hispanics are thriving in this strong economy, proving that there’s truth to John F. Kennedy’s sage observation that “a rising tide lifts all boats.”

In fact, minority workers have filled the vast majority of the millions of new jobs created under this administration. Since the end of 2016, roughly 4.5 million newly created jobs have gone to minority workers between the ages of 25 and 54, compared to 700,000 that have been filled by white workers.

Nevertheless, Democrats and the mainstream media keep pushing a divisive agenda that pits Americans against each other, usually by portraying one group’s success as another group’s loss. While President Trump works to improve economic conditions and create opportunity for all Americans, Democrats and the liberal media advocate cynical policies meant to stoke ethnic conflict. This strategy is irresponsible and risks severing the ties that bind us together as American citizens who bleed the same red blood of patriots.

Slavery reparations, for instance, have gone from a fringe notion to a central talking point among the 2020 Democratic presidential candidates. They have proposed all sorts of measures to offer black Americans cash payments as compensation for “structural racism,” but none of those proposals could ever provide the level of dignity and independence that come with access to good jobs and rising wages.
Conversely, the president’s pro-growth economic agenda, coupled with the “Opportunity Zone” initiative he created to encourage new investment in impoverished neighborhoods, has already demonstrably improved the lot of minorities in America, which is reflected in the record number of new businesses started by black women, the reduction of food stamp enrollment by 6.2 million Americans, and many other measures of economic success.

Donald Trump has created an economy that empowers all Americans, and the record-low unemployment rates for black and Hispanic workers show that his approach is working.

Instead of undercutting the shared bonds of fellow countrymen and women, this president is bringing people together by expanding economic opportunity to all Americans, including communities that had been left behind by establishment politicians for far too long.