By Jason Callahan  | The Planetary Society 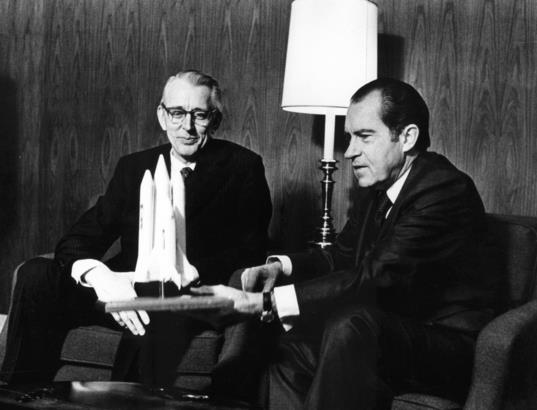 In 1969, the Apollo 11 mission successfully met President John F. Kennedy’s challenge to land a man on the Moon and return him safely to Earth within the decade. The end of the Moon race raised the question: what, if anything, was next for NASA? It would be answered by Richard Nixon's Administration, and the decisions they made altered the nation's relationship with its space program forever.

On September 22, I attended a talk by George Washington University Professor Emeritus and Planetary Society Board Member John Logsdon at the National Air and Space Museum in Washington, D.C. Professor Logsdon spoke about Richard Nixon's space legacy and previewed his upcoming book titled After Apollo: Richard Nixon and the American Space Program, which was due for release by Palgrave-MacMillan in March 2015.

Professor Logsdon spent the last several years poring through archival materials and conducting interviews to unveil a detailed account of the activities in President Richard Nixon’s White House, which certainly makes for a fascinating story. But Logsdon takes the tale a step further, using his extensive knowledge of space policy and many years of experience in the space policy community to examine the implications of the Nixon Administration’s decisions.

Professor Logsdon offers the provocative argument that President Nixon had a more lasting impact on NASA than John F. Kennedy, when considered over the longer history of the agency. Logsdon cites a statement issued by President Nixon on March 7, 1970, as the best illustration of Nixon’s “Space Doctrine,” suggesting that the tenets of this doctrine have remained the core of U.S. space policy to date.

Pondering the future of NASA and its sustainability, Nixon said, “We must think of [space activities] as part of a continuing process… and not as a series of separate leaps, each requiring a massive concentration of energy. Space expenditures must take their proper place within a rigorous system of national priorities. … What we do in space from here on in must become a normal and regular part of our national life and must therefore be planned in conjunction with all of the other undertakings which are important to us.” 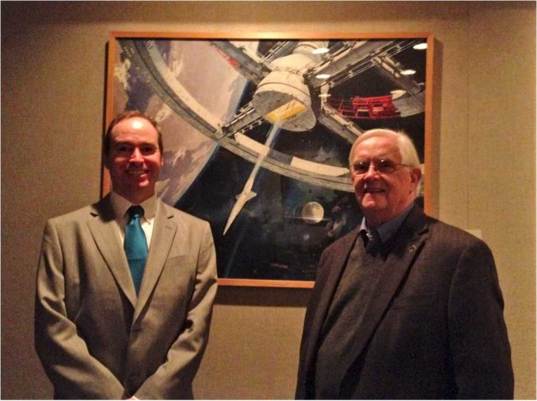 It's a little dark, but this is the author (left) with George Washington University Professor Emeritus and Planetary Society Board Member John Logsdon, standing in front of the original Robert McCall painting of the space station for the movie 2001: A Space Odyssey, located in the National Air and Space Museum conference room.

Logsdon points to three key decisions Nixon made regarding the U.S. space program, which had long-term consequences for NASA. The three decisions were:

Professor Logsdon says that Nixon’s lasting imprint on the space program was an end to human exploration of space beyond low Earth orbit in the twentieth century, and he sees the Nixon Space Doctrine and more ambitious human space exploration as incompatible. Under Nixon, NASA became just another domestic program, and the agency’s budget decreased even as it retained ambitious goals. During this time, however, NASA’s efforts did include increased international participation in U.S. human spaceflight programs.

Professor Logsdon briefly described the events of Nixon’s presidency as they related to space, revealing many fascinating anecdotes. I have included a few interesting tidbits, though there are plenty more in the book:

Professor Logsdon outlined a number of conclusions regarding the Nixon Administration’s choices for the U.S. space program, which are fully discussed in his book. In one of his more poignant observations, he noted:

“One can argue that Nixon made a major policy mistake in mandating that the space program should be treated as just one of many domestic government programs competing for limited resources.  Advocates for the last 40+ years have called for NASA budget increases and for treating the space program as ‘special.’ But it is also possible to argue that Nixon’s decision that U.S. space ambitions should be adjusted to the funds made available through the normal policy process was a valid reading of public preferences, and there were and still are no countervailing public policy reasons to reject those preferences.  As his young assistant Tom Whitehead commented, ‘no compelling reason to push space was ever presented to the White House by NASA or anyone else.’ What has happened is the least desirable outcome - for more than 40 years there has been a mismatch between space ambitions and the resources provided to achieve them.”

In the question and answer portion of the talk, an audience member asked Logsdon what he saw as the biggest problem with the human space flight program today.

He referenced the recent report “Pathways to Exploration” by the National Research Council on the human spaceflight program, saying that people tend to focus on Chapter Four which assesses the various technical pathways to get (eventually) to Mars, while ignoring Chapters Two and Three which show that there is no compelling public support for a human mission to Mars.

Marcia Smith, former director of the Space Studies Board and publisher of SpacePolicyOnline.com, pointed out that there is also no compelling resistance to a human Mars mission. Logsdon agreed, and said that a lack of a public opinion on the matter meant that the only way out of the current situation is through Presidential leadership.

Professor Logsdon is Professor Emeritus and founder of the Space Policy Institute at George Washington University. His previous book, John F. Kennedy and the Race to the Moon , met with rave reviews, and in his talk he said he plans to complete his “trilogy” with a book on the Ronald Reagan Administration’s impact on the U.S. space program.

I’d like to thank him for providing very timely corrections to this post, and for sending me a copy of his slides from the International Astronautical Congress the same day he presented there. As a side note, he mentioned to me that the Planetary Society is “here in force” at the IAC!

Professor Logsdon’s talk was the 13th presentation of the Space Policy and History Forum organized by Dr. Roger Launius, associate director of the National Air and Space Museum, and Dr. Nathan Bridges of the Johns Hopkins University’s Applied Physics Laboratory. If you find yourself in the Washington, D.C. area and are interested in attending one of the forums, keep an eye on Dr. Launius’ blog for announcements of upcoming events (and tons of other interesting information). 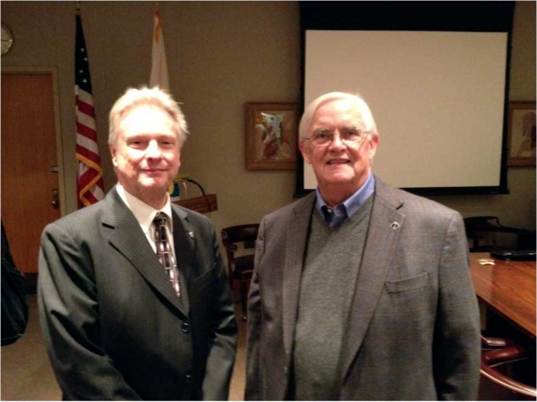 Jason Callahan  Is a former Space Policy Advisor for The Planetary Society.