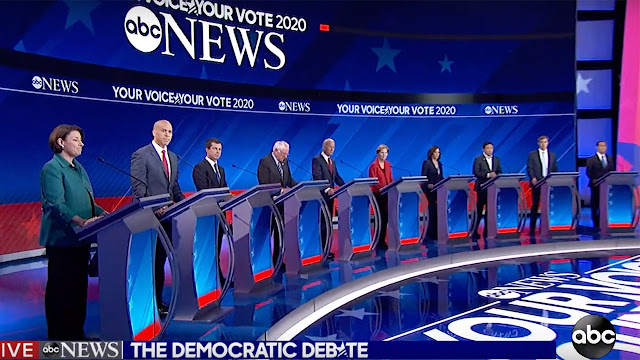 2.5 hours of debating and not a single mention of the economy.

But I don’t blame them for not wanting to bring it up. Democrats know they can’t hold a candle to the economic results achieved under President Trump.

·         Wages are rising most significantly for the lowest-paid workers, reversing a long-term trend.

·         The labor force participation rate is 63.2%, tying its highest level since 2013, showing workers are coming off the sidelines and entering the workforce. 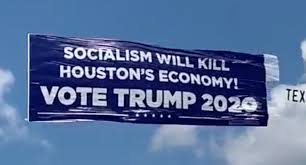 The banner President Trump Flew Over The Democrat Debate Venue

The Washington Post explains: “Section 107 would make it illegal for any private health insurer to sell coverage that duplicated benefits under the law or for any employer to duplicate the benefits.”

Bernie Sanders has made it abundantly clear: “We'll have to” raise taxes on the middle class for a government takeover of healthcare.

The Associated Press explains “taxes would have to go up significantly as the government takes on trillions of dollars in health care costs now covered by employers and individuals.”

While Democrats will try to claim that taxes would just increase on the wealthy, Bloomberg reports the obvious: “There isn’t $30 trillion sitting around from high earners.”

Take it from Bernie Sanders: The Democrats’ government takeover of health care would raise taxes on the middle class and eliminate private health insurance.

Kamala Harris has been all over the place on health care.

Joe Biden “has been wrong on nearly every major foreign policy and national security issue over the past four decades.”

Former DOD Secretary Jim Mattis has warned that Biden “exuded the confidence of a man whose mind was made up, perhaps even indifferent to considering the consequences were he judging the situation incorrectly.”

Here is the latest example:

Before the invasion of Iraq, Joe Biden went to Vladimir Putin to ask him to support the invasion in exchange for oil profits if Russia sided with the United States.

On Biden’s actions, The Intercept’s Ryan Grim responded, “It’s at a minimum disqualifying.”

·         Biden once pushed for a controversial plan to partition Iraq that the U.S. embassy in Baghdad said would "produce extraordinary suffering and bloodshed ."

·         Biden was the Obama Administration's " public salesman " for the flawed Iranian nuclear deal which has not eliminated Iran's nuclear threat nor curbed its destabilizing behaviors .

·         Biden pushed for the Obama Administration's disastrous Russia "reset " policy and personally sought to cozy up to Vladimir Putin .

·         Despite the threats posed by China to the United States, Biden has engaged in a dovish approach to China stressing "they're not competition" and they weren't going to "eat our lunch."

As a diplomat on the world stage, Biden has made many misleading and false claims and committed numerous diplomatic gaffes.

·         In 2007, Biden claimed he had been fired upon in Iraq and later backtracked saying while he did not have to duck and cover “he was near where a shot landed."

·         Biden publicly said he was unaware of any security issue at the compound in Benghazi and seemed to not know the Administration had been implored to beef up security at the consulate.

·         In 2011, Biden told Turkish President Abdullah Gul he didn't think violence in Syria would become disruptive regionally; By 2014, ISIS controlled territory from Central Syria to the outskirts of Baghdad, Iraq.

·         Biden had to backtrack after appearing to endorse China's One Child Policy while on a trip to the country saying, " your policy has been one which I fully understand "

Complied by the Republican National Committee
Posted by Frances Rice at 9:20 AM