So much for 'armed insurrection': FBI official says no guns confiscated at Jan. 6 Capitol riot

By Monica Showalter | The American Thinker 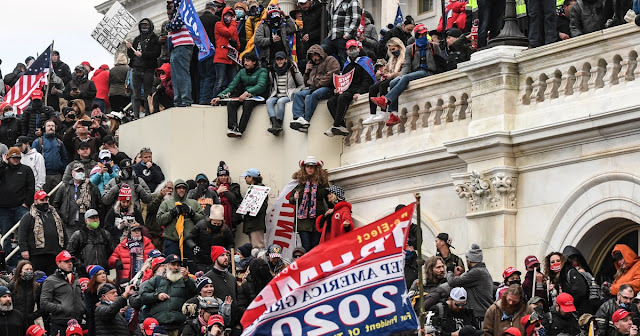 An FBI official had some bad news for Democrats at a congressional hearing Wednesday on the Jan. 6 Capitol riot.

"How many firearms were confiscated in the Capitol or on Capitol grounds during that day?" Wisconsin Sen. Ron Johnson asked Jill Sanborn, the FBI official, during a Senate Homeland Security hearing.

"To my knowledge, we have not recovered any on that day from any other arrests at the scene at this point," replied Sanborn, who serves as FBI assistant director for counterterrorism.

"I don't want to speak on behalf of Metro and Capitol police, but, to my knowledge, none," she added.

This rather ruins a Democrat narrative.

Democrats for months have been dining out on about how the mobbing of the Capitol last Jan. 6 was really an "armed insurrection," and "an assault on democracy," rather than a crowd that had a few fringe players of no discernible politics who rarely voted, who managed to invade the Capitol due to poor policing, made worse by intelligence from the FBI that was never passed on to them.

But that's a little reality Democrats and their media shills would prefer to ignore.

They've invested a lot in the phony narrative that the Capitol was subject to an armed insurrection.  They've started by going Third World on us, encircling the Capitol with ugly razor wire fencing along with thousands of poorly fed and highly disrespected (among Democrats) armed National Guard troops.  That's all because of the supposedly amazing threat that these fringe players have purportedly posed to the republic.  Capitol cops have already demonstrated that there are ways to control any such out-of-control situation if they want to — one of them shot dead a protester at close range, against all standard police practices, and managed to keep his name out of the papers.  No second-guessing thus far there.

The problem at the Capitol was poor policing, not entirely the fault of the Capitol Police, given that they seemed to lack critical intelligence, but they also did not take steps for basic crowd control.  Some even invited the protesters in, which shows some amazingly crossed communications.  The crowd, which at Trump rallies is historically peaceful, was not a great cause for suspicion.

The only thing going on was the Democrat need to create a hysterical narrative of an armed insurrection, and a siege, to enable them to put in a whole host of censorship measures, including military purges, social media spying, cancel culture writ large, and more to discourage Republicans from assembling freely, which is their First Amendment birthright.  As for Democrats, well, they can't create a crowd because Joe Biden is a zero-charisma dotard who was "elected" neither freely nor fairly.  But they sure can make political hay from promoting the phony narrative of "armed insurrection."

And they started the claptrap early.  Here are several instances of misinformation and fake news to support that hysterical Democrat narrative:

Guns, knives, bombs and bear spray: Here are the weapons Trump supporters brought to DC on the day of the Capitol attack —CNN, Feb. 17, 2021

It went on and on, and these weren't low-level media organizations.  These were some of the bigs.

Now there were no guns confiscated, according to a top FBI official, who spoke under oath.  As Sen. Ron Johnson notes, this doesn't sound like any armed insurrection he knows of.

Armed insurrections tend to be the work of leftists, such as this one, Lori Berenson, who made herself famous by collaborating with Marxist terrorist guerrillas with big plans to blow up the Peruvian national Legislature, before she was busted, put on trial, and convicted and left the courtroom screaming revolutionary slogans about how being leftist exempted her and all her filthy buddies from any terrorist designation.  I wrote about that here.

She got let out, got expelled, lives off the trust fund in the States as some kind of left-wing activist, and remains unpopular in Peru.  Oh, and unlike the so-called Washington rioters, she gets gushy press coverage.

The Capitol rioters?  A few fringe people who got their moment in the sun based on inadequate police work.  It's the reality based on the FBI official's statement.  No guns.  This doesn't sound like any armed insurrection we know of.  The fringies need to go to jail, as do truly violent leftist rioters like Antifa, with whom we hope they share their prison bunks.  But to indict the events of Jan. 6 on claimed gun grounds falls apart.  Democrats, once again, have been caught in a monstrous lie.