Democrats Are Killing the American Dream 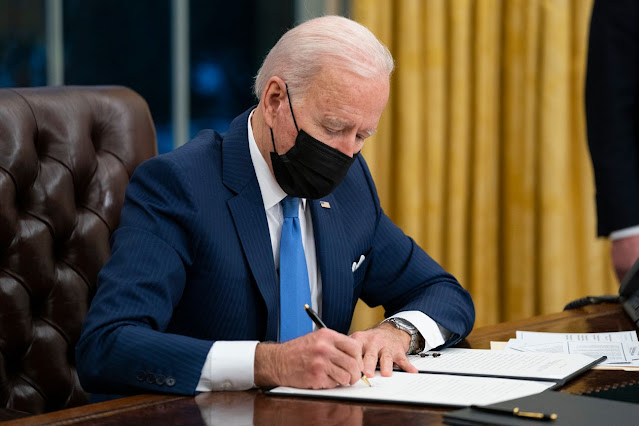 President Biden’s American Families Act makes one political reality officially clear: The Democratic Party has given up on the American dream.

The Biden proposals—coming as they do with the Democratic progressives’ rise to power—present the American people with a once-in-a-lifetime decision about what kind of country they want to live in for the next half-century.

This isn’t about the culture wars or standard Keynesian stimulus spending. The Biden plan is about public policies that will redesign American society.

The American Families Plan and other recent Democratic legislation implicitly pose several important questions. Is the traditional American idea of upward mobility still important? If so, how should upward mobility happen—through Washington or individual effort? Indeed, should the habit of individual striving give way to a presumably more important goal of nationalized paternalism?

It is no surprise that a liberalism that embraced the “1619 Project’s” rewriting of the U.S.’s founding history would not stop there and try now, despite its almost invisible congressional majority, to displace the country’s originating idea of individual opportunity with a broad birth-to-death entitlement state.

This transition began in March, when Democrats enacted a federal unemployment-insurance bonus of $300. That bonus, pushing benefits past market wage rates, indisputably is causing many to shun previously held jobs, which surely will do long-term damage to the notion of working to get ahead.

Why bother? Instead, hold out for all this new state-subsidized compensation that reduces the incentive or need to work—the same skip-work choice public-school teachers across the country have made the past year.

Nowhere will you find a Democrat calling these proposals what they are—entitlements like Medicaid, Medicare and Social Security. Rejecting that criticism at his news conference Wednesday, Mr. Biden said all his spending will “create” jobs and growth.

His progressive colleagues don’t justify spending as optimism about the American system or its private economy. For years, the word favored by progressive analysts to describe the U.S. economy has been “stagnation.”

Though this argument is disputable, they say private-sector wage growth in the U.S. has been stagnant since the 1970s, isn’t likely to improve and that middle-class survival isn’t possible without replacement income in the form of federal social-welfare programs. Some conservatives agree but purport not to want Mr. Biden’s entitlements.

At his news conference, Mr. Biden made the manifestly false claim (also falsely citing the Heritage Foundation in support) that the Trump administration’s policies produced minimal economic benefit. In fact, before the onset of the pandemic last year, median household income in 2019 grew 6.8%, with higher increases among blacks, Hispanics, Asians and women. Unemployment for these classes hit historic lows. Possibly Mr. Biden was distracted with something else then and never heard about these gains.

Americans need to understand the realities of what Mr. Biden is offering them. Bernie Sanders wanted “Medicare for all,” but that applied only to healthcare. Mr. Biden’s reach goes beyond even Bernie, proposing what will become Medicaid for everything.

The reality of the new Biden entitlement is that costs will be contained, even nominally, only by defaulting over time to Medicaid-quality child care and universal pre-K.

But what if the progressive analysis is correct—that most Americans are ready to accept new middle-class entitlements as a substitute for centuries of individual striving?

Mr. Biden himself made this proposition clear in an interview Monday on the “Today” show when he said that “after 400 years,” black Americans remain “far behind the eight ball in terms of education, health, in terms of opportunity.”

If the American Families Plan passes, we’ll all be behind the same federal dependency eight-ball.

Generations of similar welfare compensation eroded the American dream for many black Americans by disincentivizing upward mobility. Hundreds of thousand still live in public-housing units built for them in the mid-1960s. The unions whose teachers refuse to return to inner-city schools will run child care.

The Biden Democrats not only don’t apologize for this malgovernance, they want to spread it to the nonpoor.

If Republicans let the Biden entitlements become law this year, they will indeed become tax collectors for the permanent welfare state, with payroll-tax increases or a national value-added tax becoming inevitable. The current Biden entitlement pay-fors—higher taxes on corporations and the 1%—are obviously preposterous as long-term support.

And permanently unanswered will be whether American parents ever actually concluded that traditional paths upward are out of reach for them, their children and grandchildren.

Come to think of it, that turns out to be the true big steal in the 2020 election: Joe Biden never asked voters if they wanted to replace the American dream. He’s doing it anyway.