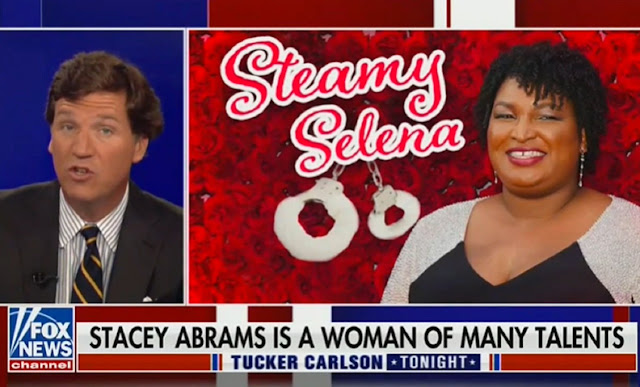 The novel was read by Carlson’s senior producer, with the popular Fox News host hilariously chiming in periodically.

Abrams was apparently a romance novelist prior to deciding to throw herself into politics.

“Heat, like an inferno, blazed in his veins. Temptation, like a song, clouded his mind. It demanded that he slide his arms around her, that he trail his hand along her spine to sink into the silken curls at her nape,” he read.

Carlson asserted in response that, “She tormented his flesh with her palms. We were tormented as we read it. As we read it more, we noticed our thighs were also getting harder, much harder.”

“The book is called Hidden Sins, and frankly, we feel we’ve just sinned in public. You can have that feeling too for the low low price of just $7. Get it. But go easy on your thighs. It’ll wear ’em out,” Carlson concluded.

CLICK HERE TO SEE THIS STEAMY BOOK ON AMAZON:

Cassandra Fairbanks is a former leftist who came out in support of Donald Trump in 2016. She has been published in the International Business Times, RT, Sputnik, The Independent and countless other publications.