Why the Left fears right to work 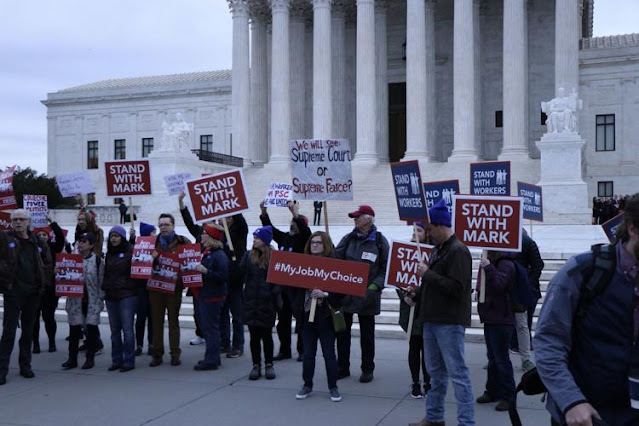 Protesters outside of the U.S. Supreme Court during the oral arguments for Janus vs. AFSCME, Feb. 26, 2018. - Remo Wakeford | Illinois News Network

“States cannot balance their budgets as long as unions control their economies.”

The Industrial Revolution changed the world forever. It created a class of entrepreneurs and a new middle class made up of workers from rural small towns and immigrants. People who planned their work around the seasons, the weather and the daylight worked in U.S. factories around the clock.

Adapting to industry was challenging. Unions watched workers trying to adjust to this new life and rushed to their rescue. They helped pass laws to protect children and improve working conditions. This also made union bosses wealthy and gave them more money to elect and control politicians.

Laissez-faire capitalism drove the Industrial Revolution. The states encouraged investment by not over-regulating new industries. For the most part, the federal government did not interfere. This did not change until the Great Depression when President Franklin D. Roosevelt invaded industry and labor for his benefit, not for theirs.

“Nothing happens by accident. It happens when it is planned to happen.”

America had craft guilds and worker leagues since our founding. But the Industrial Revolution’s need for labor was the opportunity that unions needed to become elite powerful political machines.

During the Great Depression, the Supreme Court gave FDR a gift that keeps on giving with the Wagner Act in 1935. This empowered labor bosses over industry with exclusive bargaining power. While labor jumped for joy, the economy tanked. It took a world war to undue the damage it did.

“The Great Depression was produced by continual government mismanagement.”

From 1935 until the end of WWII, labor unions flourished. But when unions told returning GIs they had to join up or get out, they met their Waterloo. Unions had powerful political ties and “syndicate enforcers” but could not bully the GIs. Since state industries had been hurt by the Wagner Act, this opened the door for them to protect their economies and they started passing “right-to-work laws.”

If unions are as great as liberals claim, why do states love right-to-work laws? Why do unions pay Democrats big bucks to stop them? Because they give millions to the left. For example, monthly dues for the United Workers of America are $50. With 980,000 members, that buys a whole lot of political influence.

“I’m back! And I will remain president of this union until I die!”

According to Open Secrets, unions contributed $27.5 million to Joe Biden’s campaign in 2016. And unions gave an astronomic $108.2 million to other local and national Democratic campaigns. All of this money they used to buy these elections came from rank-and-file, dues-paying union members.

Is it a dichotomy why the unions only support Democrats since they over-tax and regulate industry, which hurts employment? After witnessing Donald Trump’s economic success, more members than ever are leaning right and believe the GOP does much more for them by helping industry grow.

Unions have a decadent history of using crime bosses and violence to force workers to join them. This was how they became so powerful during the Industrial Revolution and the Great Depression. They partnered with organized crime and shady politicians and built empires financed by workers dues.

“Sometimes it takes a bit of convincing to make people accept unionization.”

Unions shot themselves in the foot when they organized civil servants, who already had far better pay and benefits than the private sector. Public service unions are a scourge on state and federal budgets. Yearly deficits continue to grow to finance vastly under-funded public pension systems.

California’s woes are self-inflicted. Their $54 billion deficit and $1 trillion unfunded pension system is due to 350,500 state employees that bring home hefty six-figure salaries and pension checks.

Before we shed tears over the left coast, Gov. Gavin Newsom begged Nancy Pelosi for a bailout. OpentheBooks.com found that 45,718 city and county employees out-earned Newsom, the highest paid state governor at $202,000.

“Everything costs more these days, so we have to pay more for good workers.”

They also correlate with long-term business development. Under Donald Trump, employment grew 9.4% compared to the 1.2% average growth for states without right-to work. Unemployment in Indiana, Michigan, and Wisconsin fell an average of 2.2% following the passage of recent RTW legislation.

Economist and researcher Kevin Moore found that RTW laws have no impact on nonunion wages, or union wages, or average wages in either union or nonunion states. The only “advantage was a disadvantage” since union workers received the same pay – regardless of individual performance.

“No matter what your racket is, you have to be smart as hell to keep getting raises.”

In 2018 (Janus v. AFSCME), the U.S. Supreme Court ruled that forcing anyone to pay union dues in the public sector violated the First Amendment right to free speech and association. Public-sector unions predicted they’d lose 30% of their members and millions of dollars in cash flow. But that never happened. Local unions were able to strong arm members who tried to quit, and “persuade” them to keep paying or else.

Thomas Sowell wrote, “Facts are not liberals' strong suit.” Since the Great Depression, the alliance of unions and Democrats has been a curse for American businesses. Most states don’t want unions and the others want the opportunity of free choice. Yet Democrats and the unions quote imaginary scenarios of poverty, economic distress and even “racism” if politicians don’t protect labor unions.

America’s top ten states for current economic growth and projected growth for this decade are all right-to work states. For the 13th consecutive year since the American Legislative Exchange Council launched its ranking of economic competitiveness, RTW laws continue to drive the economies forward every year in these states.

The left and the unions have come out with a vicious, libelous attack against RTW laws to pass the PRO Labor Act. They ignore the majority of states that have RTW laws because unions are bad for their economies. The left fears RTW laws because unions give them millions every year. Beware who you vote for in the midterms. It might cost you your job, if you still have one.

"I've said consistently that no employer ever really accepts a union. They only learn to tolerate the unions.”