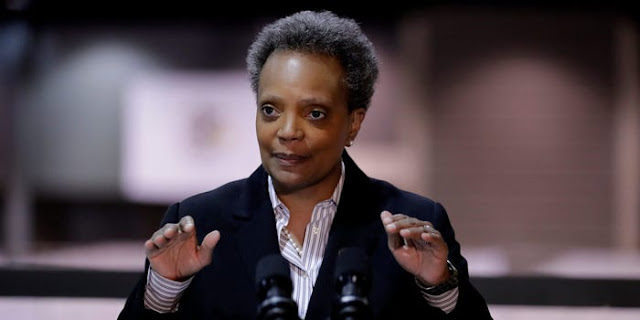 Former Hawaii Rep. Tulsi Gabbard accused Lori Lightfoot of "anti-white racism" after the Chicago mayor announced Wednesday that she would only be interviewed by minority reporters for the two-year anniversary of her inauguration, sparking backlash from press corps members and other politicians.

"I ran to break up the status quo that was failing so many," Lightfoot, who is Black, tweeted Wednesday. "That isn't just in City Hall. It's a shame that in 2021, the City Hall press corps is overwhelmingly White in a city where more than half of the city identifies as Black, Latino, AAPI or Native American."

She added: "This is exactly why I'm being intentional about prioritizing media requests from POC reporters on the occasion of the two-year anniversary of my inauguration as mayor of this great city."

Gabbard weighed in on Lightfoot's decision on Friday, calling for Lightfoot's resignation in response to her comments earlier this week.

"Mayor Lightfoot's blatant anti-white racism is abhorrent," Gabbard tweeted Friday. "I call upon President Biden, Kamala Harris, and other leaders of our county—of all races—to join me in calling for Mayor Lightfoot's resignation. Our leaders must condemn all racism, including anti-white."

Gabbard's tweet trended on Twitter on Friday, with some users on the social media platform slamming the former congresswoman for using the term "anti-white."

WMAQ-TV reporter Mary Ann Ahern, who is white, first tweeted about Lightfoot's decision on Tuesday, later calling the move "outrageous" in an interview on WGN Radio.

"To choose a reporter based on the color of their skin is really pretty outrageous," Ahern said, citing a report by USA Today. "Does she think I'm racist? Is that what she's saying?"

Chicago Tribune reporter Gregory Pratt tweeted Wednesday saying he was granted an interview with the mayor but declined after her office refused to lift the condition.

"I am a Latino reporter @chicagotribune whose interview request was granted for today," Pratt tweeted. "However, I asked the mayor's office to lift its condition on others and when they said no, we respectfully canceled."

"Politicians don't get to choose who covers them," Pratt continued.

The Triibe, a Chicago-based digital news outlet aimed at "reshaping the narrative of Black Chicago," according to its website, pushed back against the criticism directed at Lightfoot for prioritizing interviews with reporters of color.

"With this outrage, y'all are implying that Black and Brown journalists aren't capable of asking the hard questions," the media platform tweeted Wednesday, along with a photo of one of their reporters interviewing the Chicago mayor.